Nashville was on our agenda for our most recent trip to the USA. In a way you could call us ‘explorers’, we love the touristy things, but we love exploring small town America and nothing inspires us like discovering places that are out of the way and off the regular tourist beat places.

This time we stumbled across Olive & Sinclair Chocolate Factory, not in a shopping mall, not in a strip shopping centre, just on a corner pretty much in the heart of suburbia amongst every day homes. 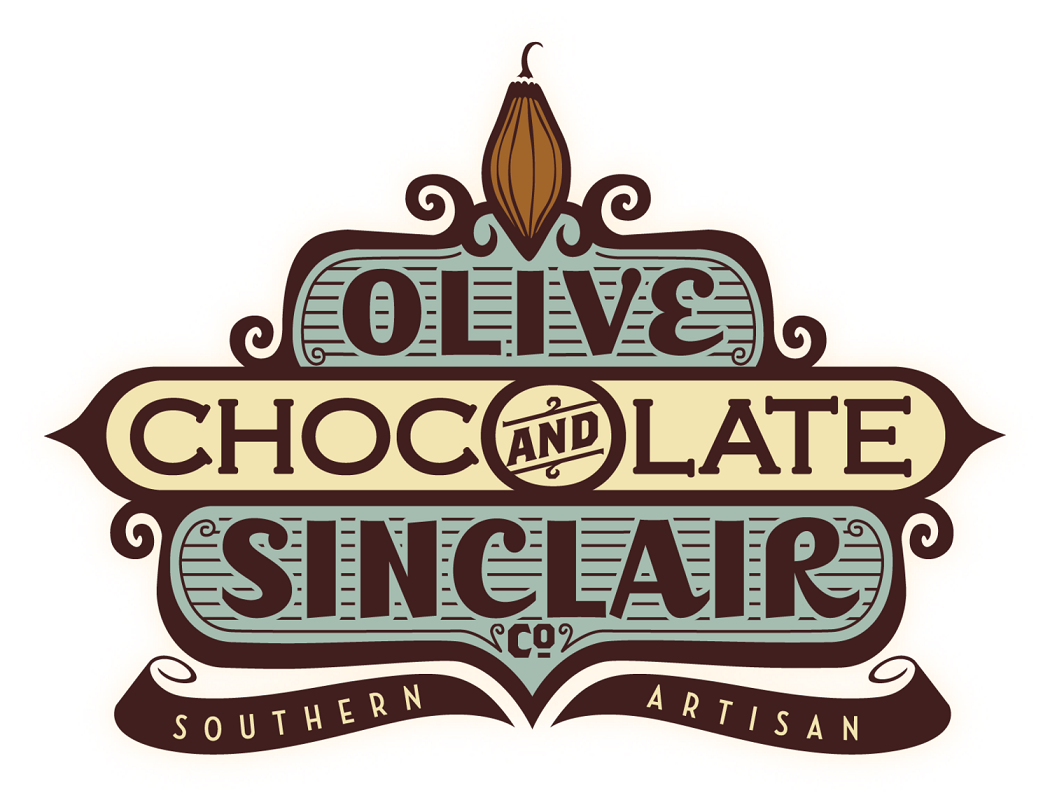 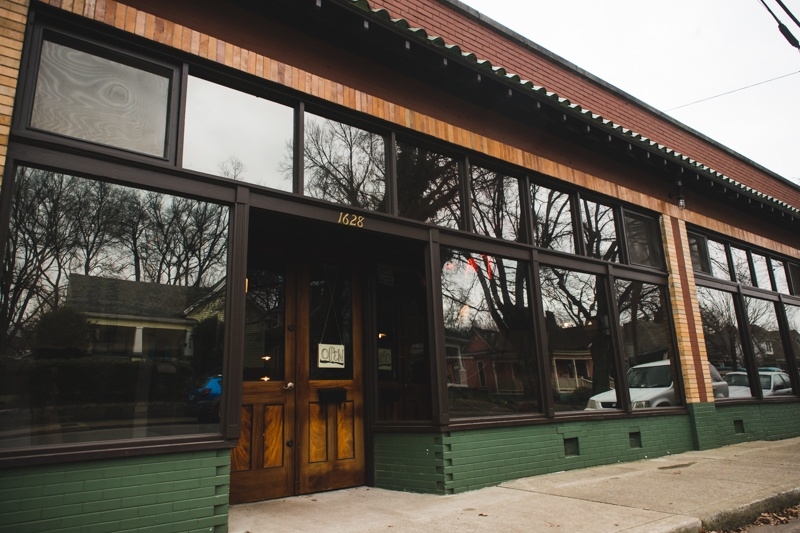 They say that good food is made with love and the Olive & Sinclair guys LOVE chocolate.

Likely long before you’ve had your first cup of coffee in the morning, they are at their factory starting up the process of roasting cacao beans.  Their chocolate is made by more than ingredients and old-fashioned processes, it’s made by people, these people. 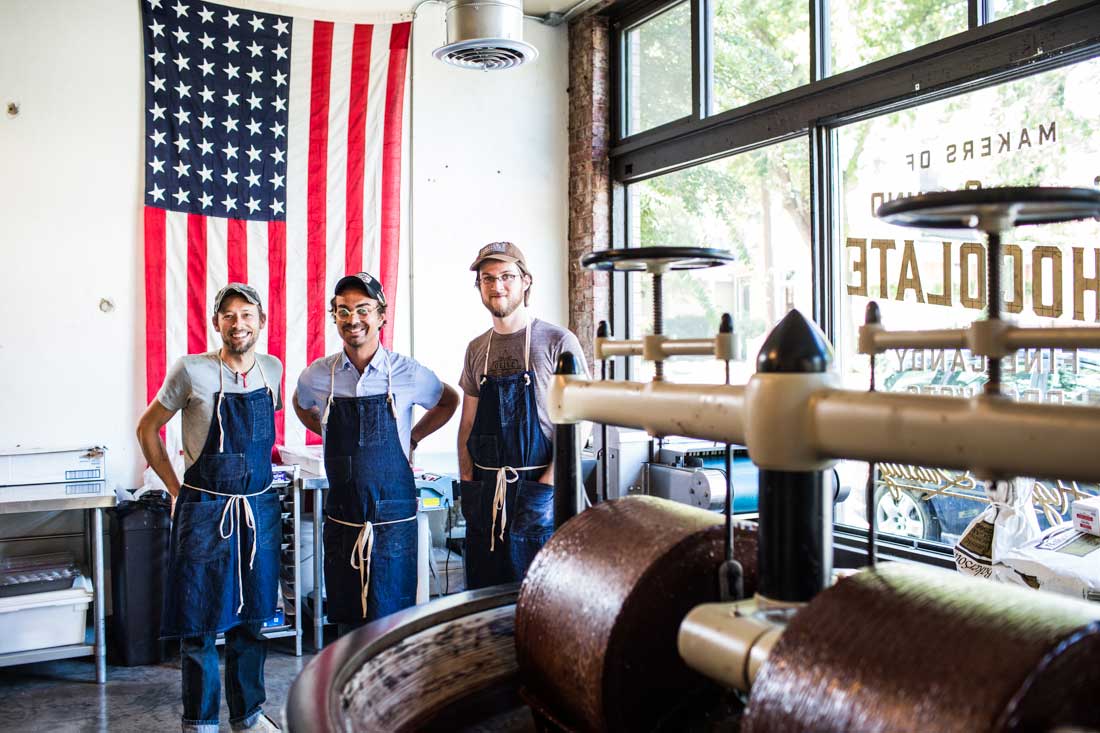 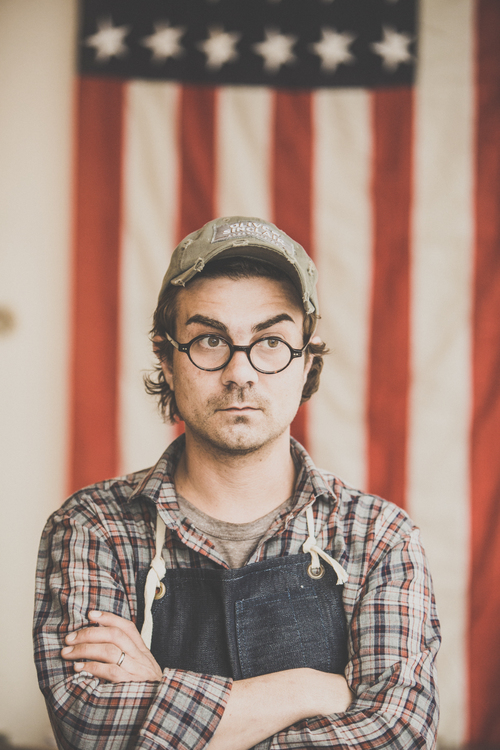 Working in restaurants and the food industry since the age of 14, Founder/Owner/Maker Scott Witherow has always been obsessed with food, food culture, and of course chocolate. After obtaining a Bachelor’s of Science from MTSU and a few years later, Le Grande diplome from Le Cordon Bleu London, Witherow knew he wanted to do something with chocolate. While trying to figure out what that “something” was, Witherow spent time in various restaurants in Nashville, around the United States, and even returned to England for a few positions.

In late 2007, the seed was planted and the ideas started forming for Olive & Sinclair. Unaware of what he was getting himself into, Witherow purchased small table top machines and started making 3-5 pounds at a time. Oven roasting and hand cracking the beans, with something resembling your grandmothers old sausage grinder that clamps to the side of the kitchen counter, Witherow would separate the nibs from the shell using a hair dryer and an old French “chinois” he had brought home from culinary school. 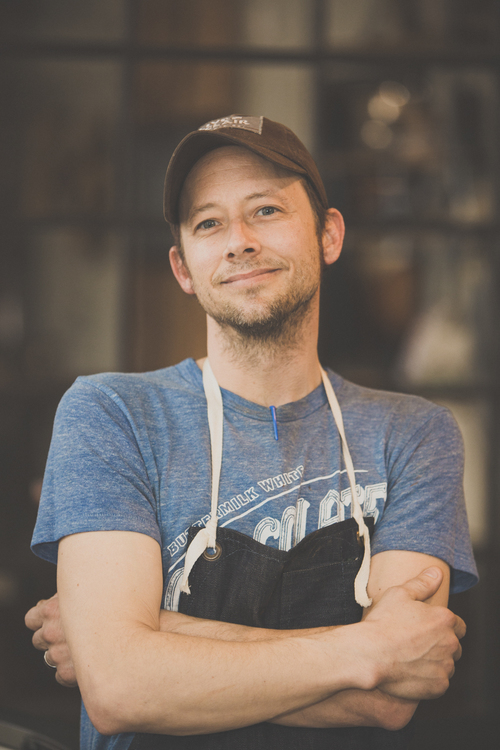 Jason and Scott are longtime friends and can tell some pretty funny stories about the early days. In fact Jason tried pretty darn hard to convince Scott not to hire him. These days Jason leads the Olive & Sinclair ship, beginning before the sun comes up on most days, making sure everything is running smoothly and efficiently, and quite honestly can be seen wearing just about any hat at the Olive & Sinclair factory… even if the sun ain’t up yet. 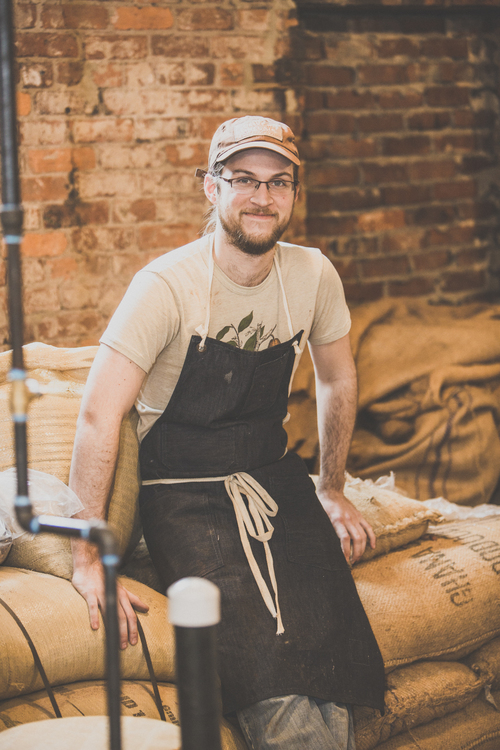 Rogers joined the Olive & Sinclair team in its early days. While “Rog” was attending culinary school at the Arts Institute of Tennessee, Scott was teaching Pastry classes. Rogers and Scott crossed paths a few times but it wasn’t until his other pastry instructor noticed Rog’s interest in chocolate and confections.   He was asked if he would be interested in interning at Nashville’s new Olive & Sinclair. Rog came over, was a great fit and super eager. Now Rog heads up most new confections, truffles, bon bons and factory exclusives. 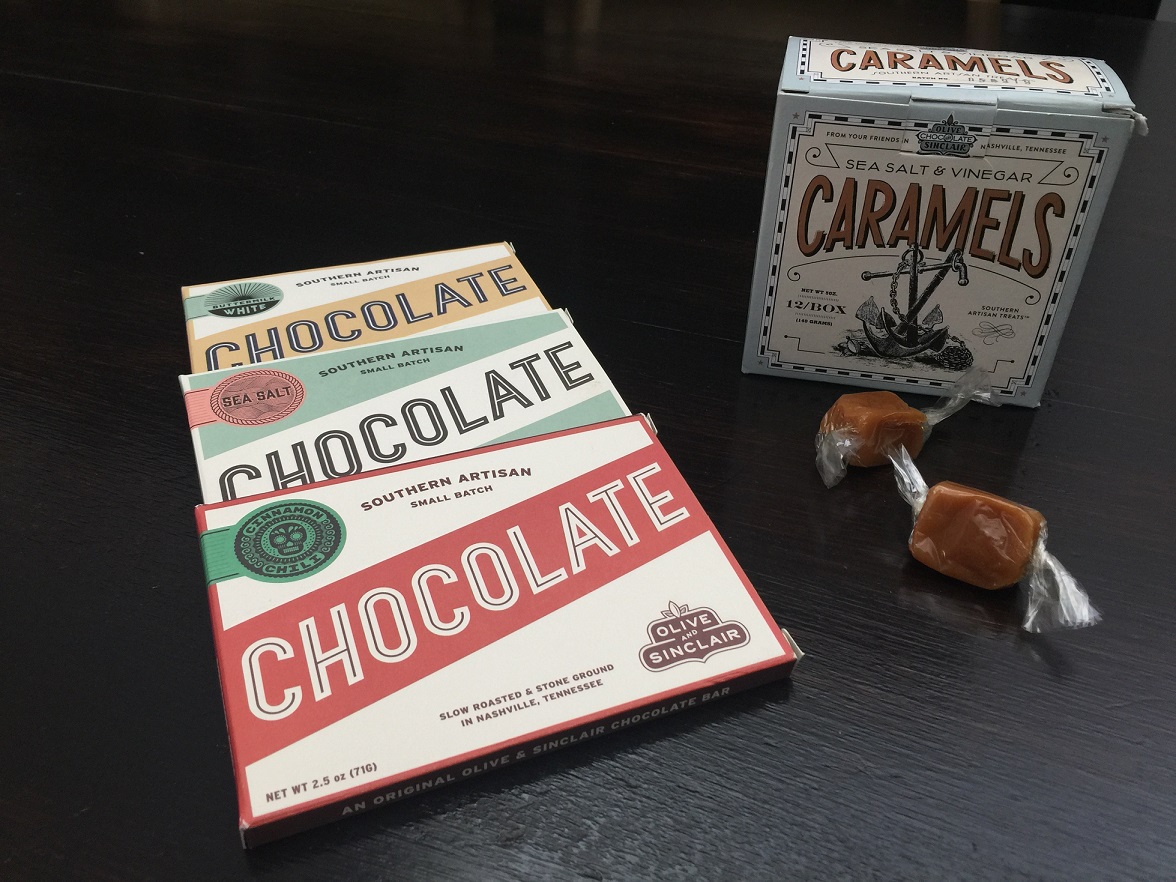 It was in the fall of 2014 Olive & Sinclair found its home at 1628 Fatherland Street in Nashville, TN.

Prior to being the home for Olive & Sinclair, 1628 fatherland Street began in 1890 as an H G Hill Grocery Store, serving Nashville and the neighborhood for many decades.  The building later continued its life in the food business when it was occupied by Archway Cookie Company. 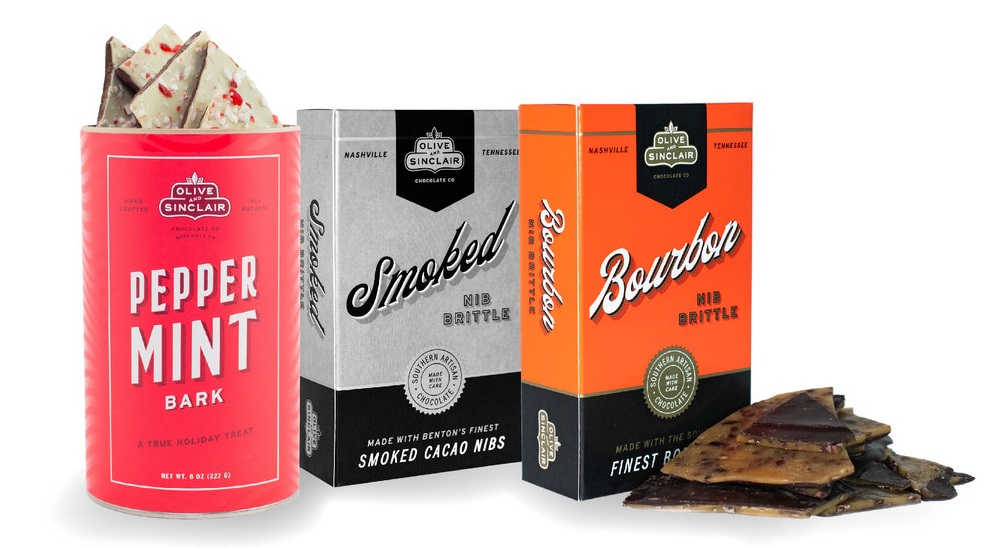 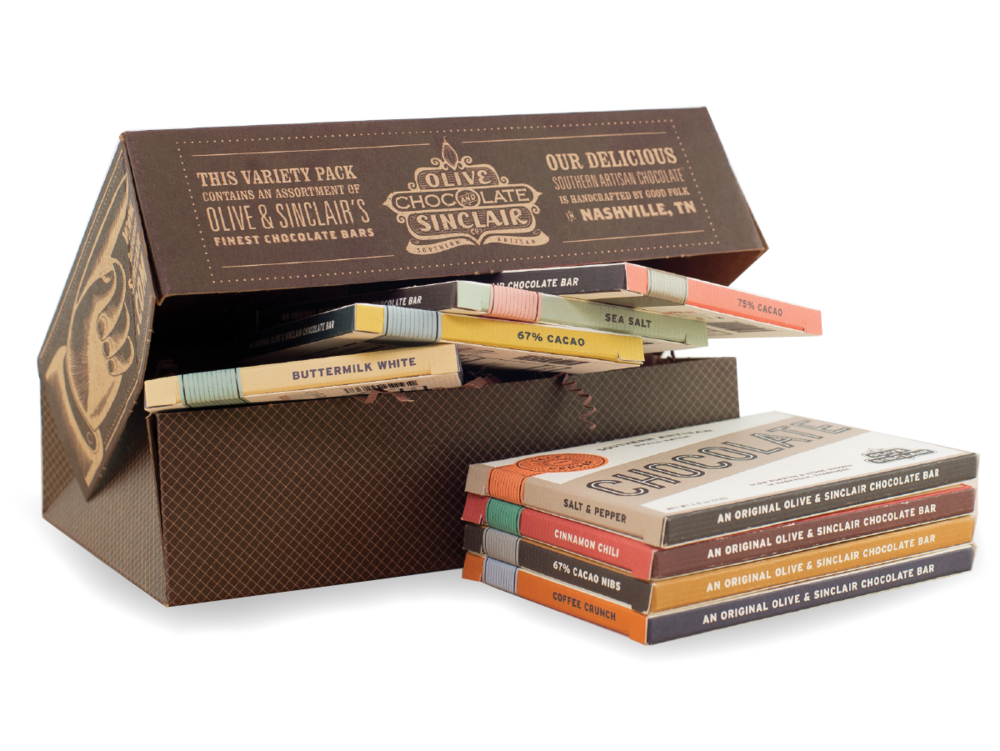 Peppered with antiques, the building was gutted and left as bare bones as the FDA would allow. Their Roaster, Tempering units and other machines were laid out and the search began for antiquated pieces that would make it the permanent home. 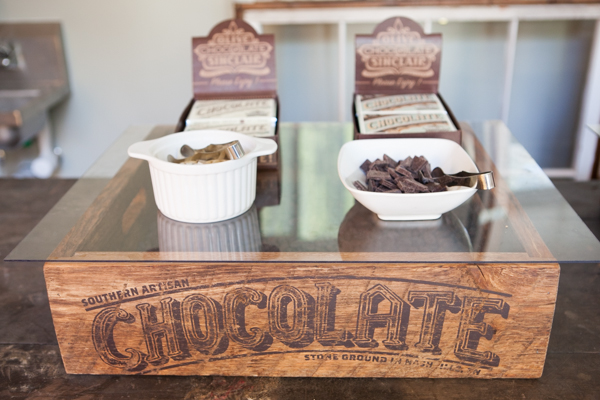 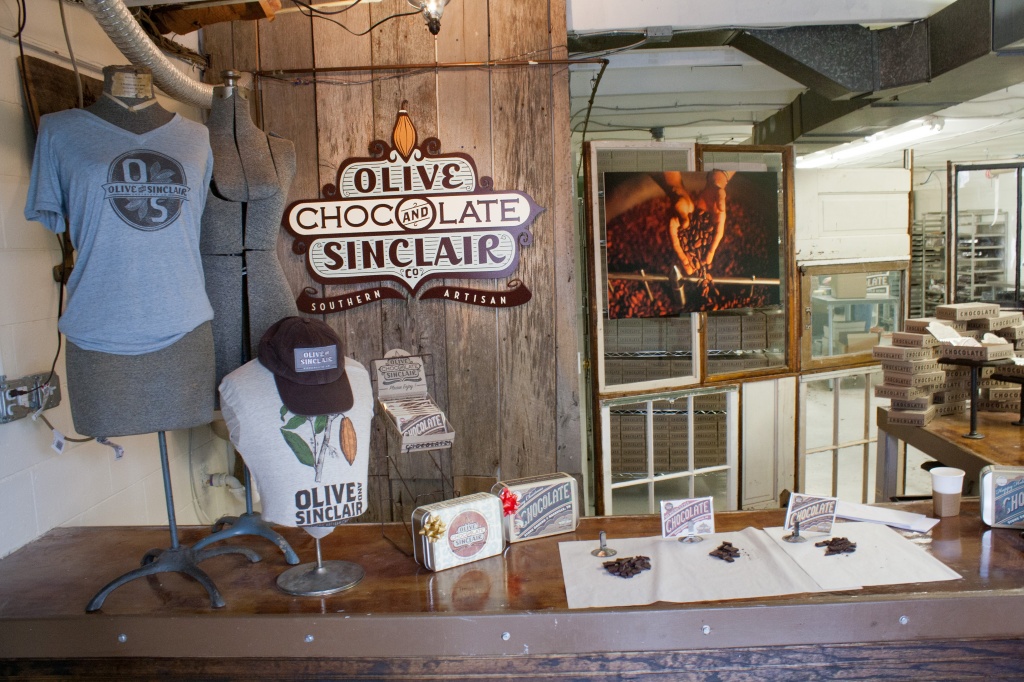 Upon entering the factory you are greeted by relics peppered throughout the factory reinforcing the antiquated methods used in making Southern Artisan chocolate.   This can be seen in the antique pendant factory lighting, rescued from an old army barrack outside of Atlanta,  the 200-year-old heart pine was used to replace rotted support beams, glass candy cabinet that houses their new line of Chocuterie, lit by the glow of the vintage EAT neon diner sign they scored out in Virginia. 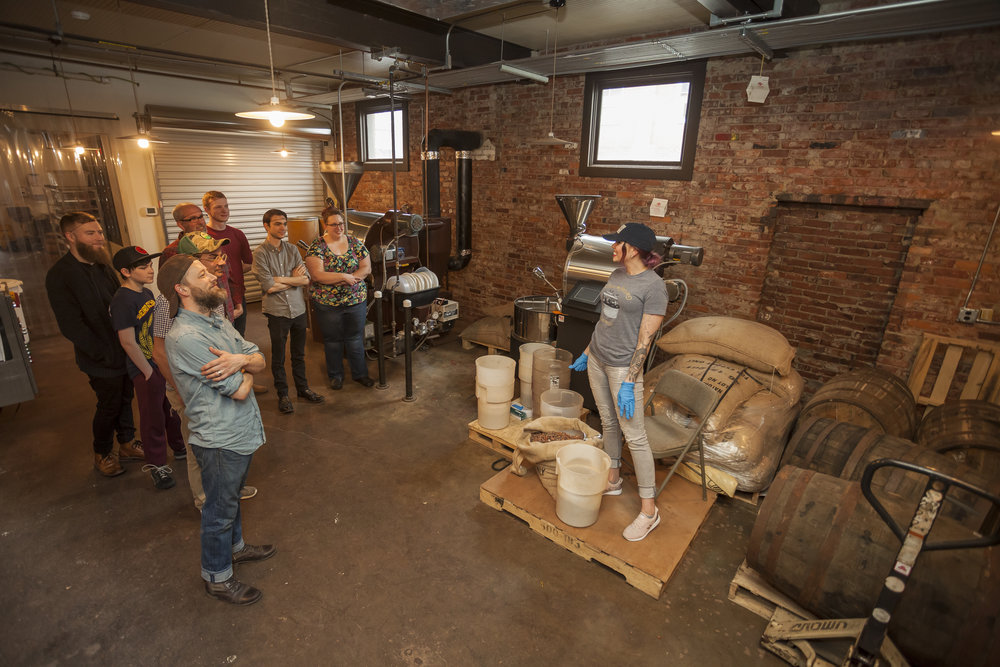 This is only a nibble of the rarities and antique musing you will find in and around the Olive & Sinclair Factory but you’ll have to go for a tour to find out more! And of course, to get some of their delicious sweet (and not so sweet) treats.