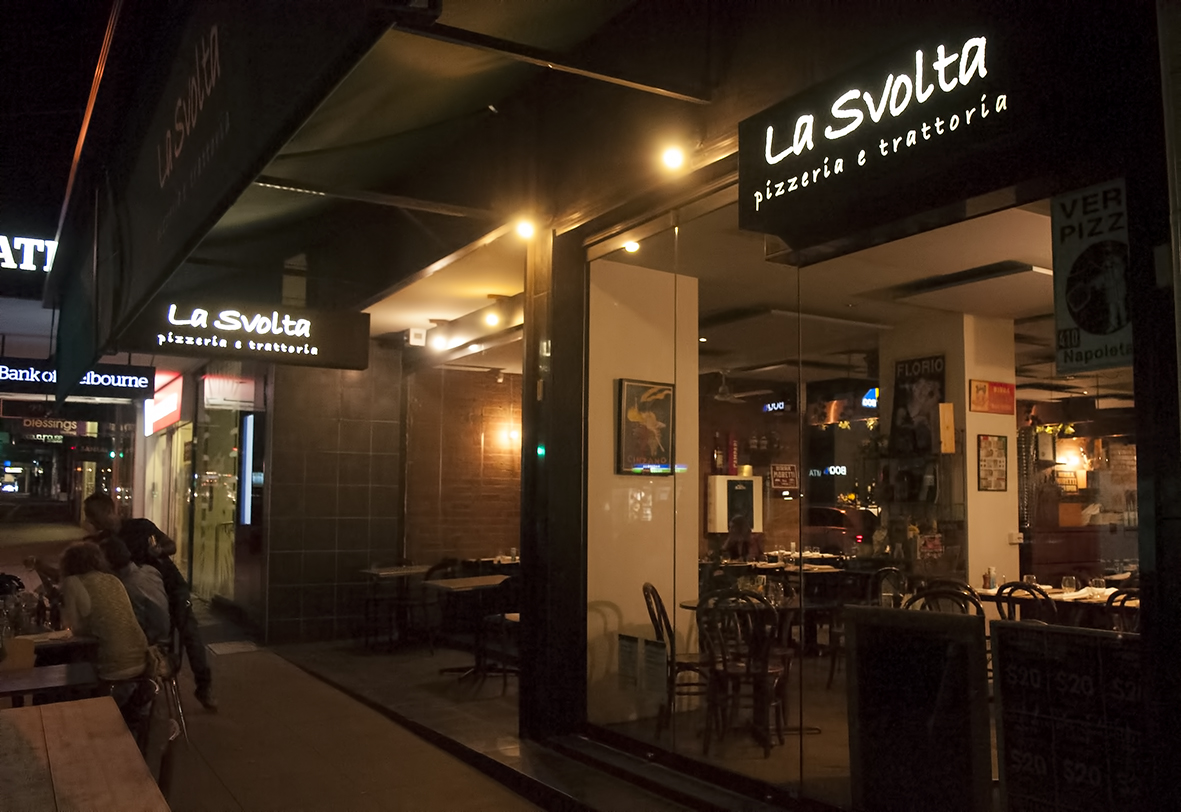 Hampton Street in Hampton has long been known for its boutique stores, restaurants and bars, and at most hours of the day you will see shoppers bustling from store-to-store and diners seated at indoor and outdoor cafés.

There is always a vibrancy and buzz to Hampton Street and often locating a place to park my car can be difficult, but I have always found that even if I have to drive around for a while, once I have found that park, the time and effort is always worthwhile.

La Svolta, located at 450 Hampton Street, is one of the restaurants where diners are flocking both day and night.

The team at La Svolta is led by Valerio Calabro and Giuseppe ‘Pino’ Russo; Italian natives, best friends and home cooks with a passion for all things cucina Italiana (Italian kitchen). 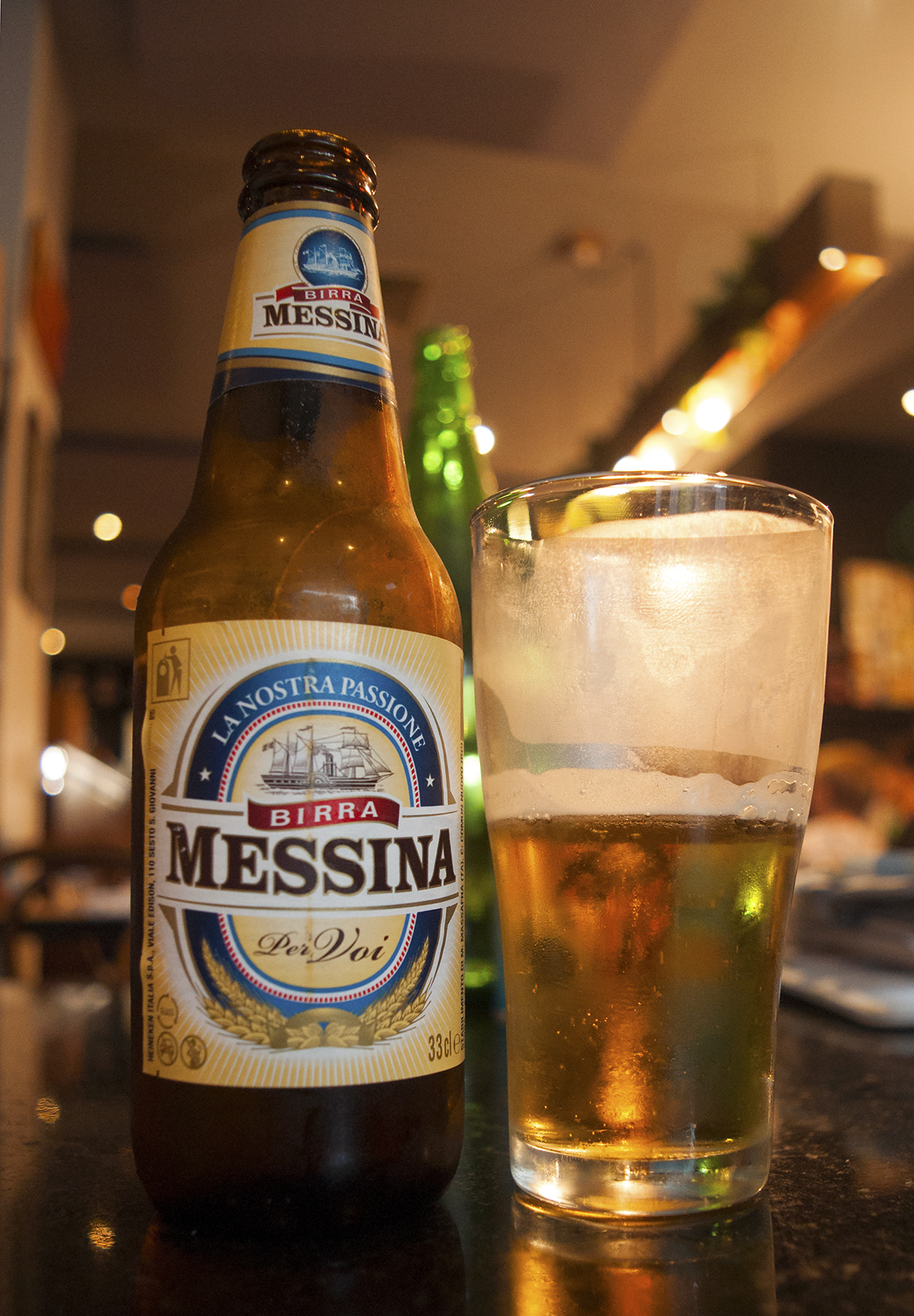 Valerio and Guiseppe ventured to Australia with a vision to bring the fresh flavours of their homeland to the other side of the world. They say their dishes are made with love, from their delicious pizza bases to their fresh, handmade pastas, delicious antipasto dishes and sauces, and firmly believe mangiare e felicita – eating is happiness!

Famous for its pizza, the kitchen in the Hampton Italian restaurant brings authentic, seasonally driven and regionally-inspired to Melbourne’s south side. The menu pays homage to all corners of ‘The Boot’, with recipes and techniques being passed down from Mammas and Nonnas, Pappas and Nonnos, creating a truly special dining experience. 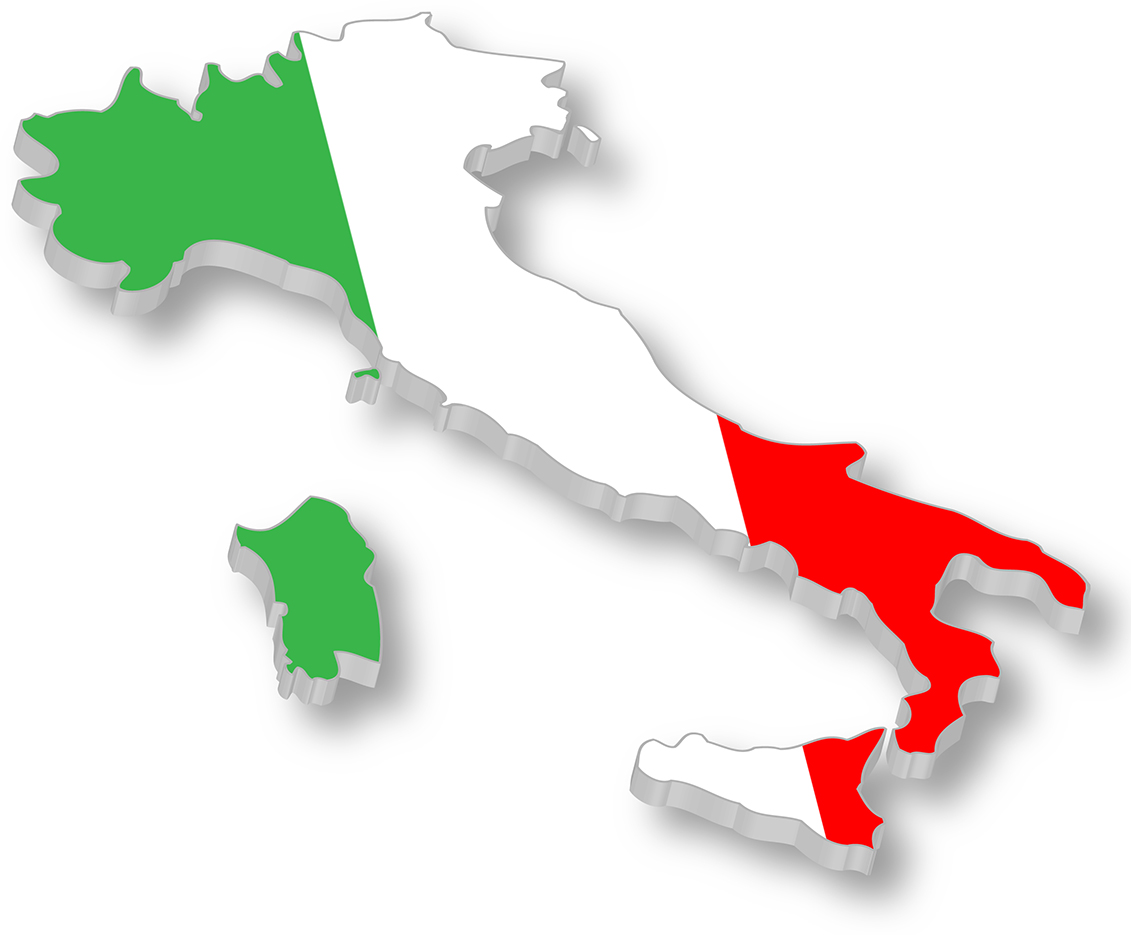 La Svolta is also one of only a handful of pizzerias in Australia that hold Associazione Verace Pizza Napoletana (AVPN) Accreditation, as awarded by the official association in Naples, meaning, they make pizza the real way, the Napoli way.

I first tasted true Napoli-style pizza a few years ago and have been hooked ever since. It is delicious and very different to the style of pizza you usually will find in Australia – any time I find the chance to have one, I will.

I was excited to try the pizza at La Svolta, but I also wanted to sample some of their other dishes, as my research had shown their menu was not only extensive, but some included some ‘out of the ordinary’ ingredients.

For once, parking in Hampton Street was easy; it was a Tuesday evening, which is not generally regarded as a great night for restaurant business but, as I soon discovered, La Svolta had a good number of diners who were already seated.

As the night progressed a constant stream of diners – families and couples of all ages – came through the door, ate and went on their way again as did a number of patrons picking up their take-away orders. 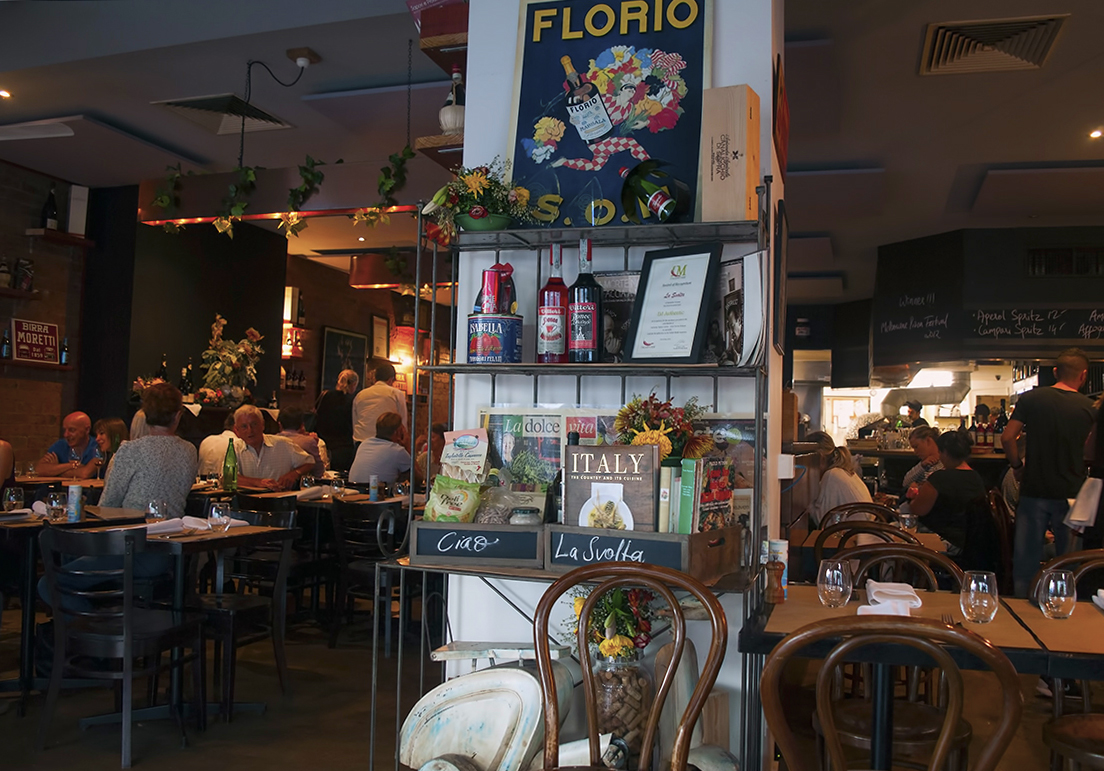 The décor is inviting with a polished concrete floor, exposed brickwork, blackboard walls, a fireplace, timber tables and chairs all giving the space a comfortable and homely feeling.

One small section of this casual dining restaurant has bentwood chairs and while I love the look of this type of seating, I honestly don’t know why restaurants persist with them as they are usually rickety and unstable, as was the case this time. It should be noted that the bathrooms are upstairs and while this isn’t a problem for most people, those who have difficulties with stairs would need to know.

I found the waiters to be absolutely charming, albeit sometimes a little difficult to understand with their very strong Italian accents, but this only added to the charm of the evening.

As usual, my dining partner and I left the menu up to the staff, who prudently checked to see if we had any allergies or specific dislikes – we don’t, but that is tick number one for La Svolta because, while I firmly believe it is the diner’s responsibility to ask about ingredients if they have allergies etc, I also find it refreshing that wait staff are aware of this situation.

I noted that La Svolta offers gluten free pizza bases and mentions that while they are suitable for those with gluten intolerance, they are not coeliac friendly – something many restaurants fail to point out. 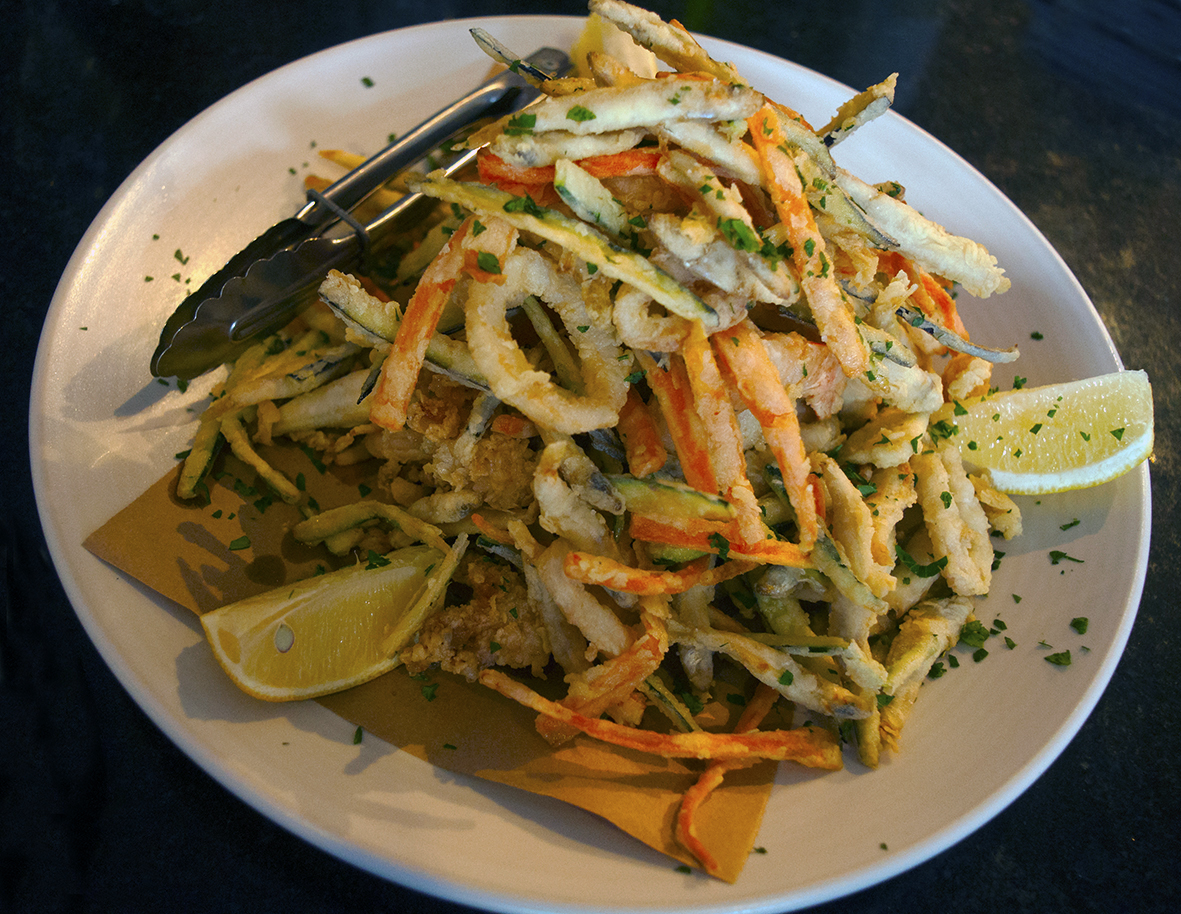 The first dish we were served was a plate that was piled high with julienned vegetables and seafood that were lightly battered, fried and served with slices of lemon. I usually shy away from this type of food as an entrée as I find it to be too heavy and to not sit well when there is going to be more food to come, but this was not the case this time.

There was no greasiness at all and the lemon nicely cut through the richness of the batter. The seafood was extremely tender, something that really showed with the baby octopus – it’s very easy to make octopus tough as boots, but this was soft, tender and full of flavour. Overall the entrée was beautifully cooked, quite salty and delicious and would have easily served four people. 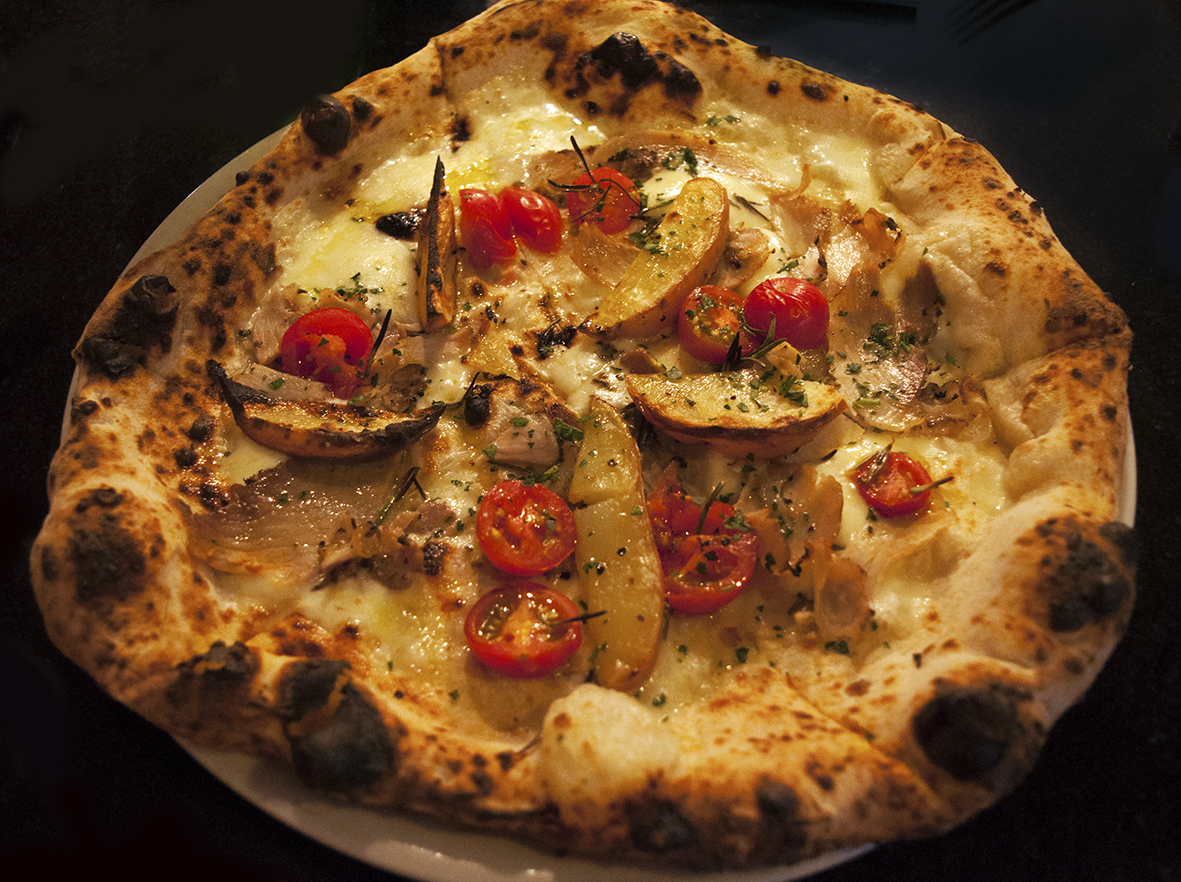 Next came one of their famous Napoli style pizzas – exactly what I had been waiting for. As we had left the menu up to the staff, we were served one of their pizzas from their ever changing specials menu. I can’t say that I remember the name of the pizza but it was topped with cheese, very thinly sliced pork belly (that had been slow cooking for 6 hours) potato and basil. Not at all what I was expecting – where was the tomato and salami? Well, I came to try some of the ‘unusual’ ingredients and this was it – time to dig in!

Firstly I noted that in true Napoli style, the base was thin and soft while being nicely puffed and aerated at the edges. To eat a slice in pizza in true fashion you should fold the tip of the piece in, then fold the sides in and bite. You can’t do this with most types of pizza, but a true Napoli style one you can – and – I could!

The pork was so finely sliced and ridiculously tender you barely knew you were biting into it but the flavour was there, a beautiful pork taste that was accentuated by the lack of other strong flavours.

I have to admit to finding the potato (cut into thin wedges) a little unusual and for me it was something I could have done without; I don’t think the pizza needed it but I was more than happy to be trying something a little different. 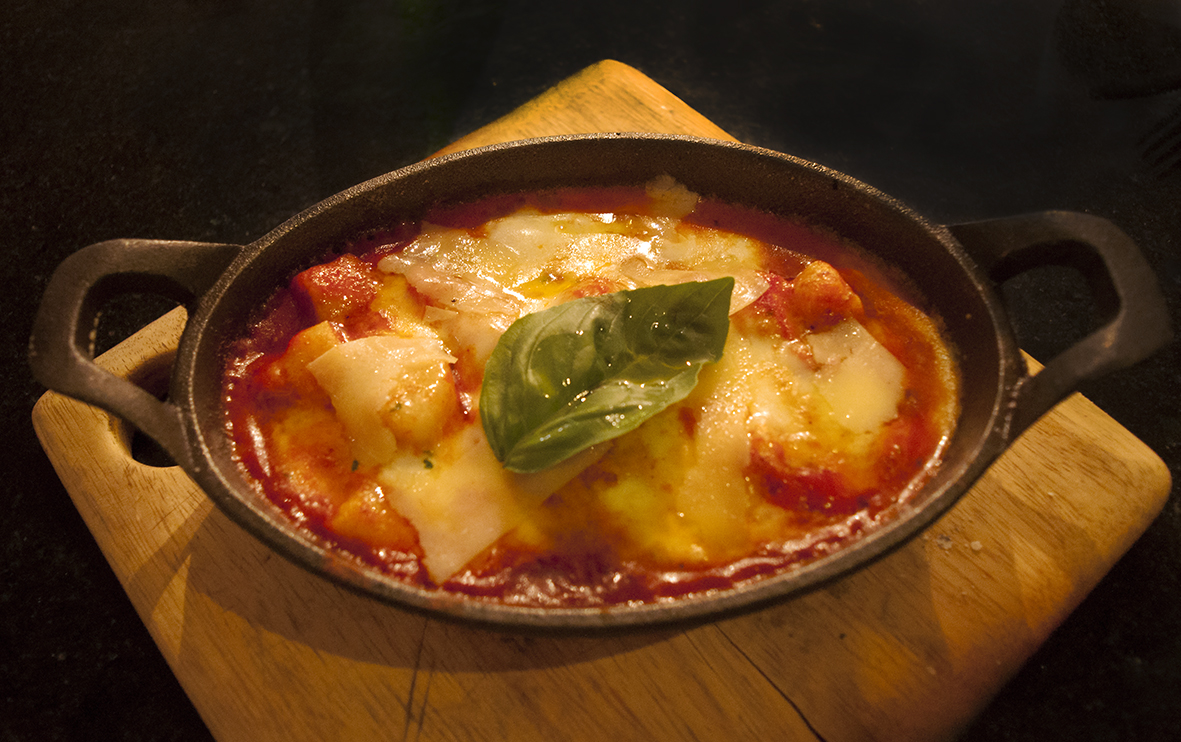 We were then served gnocchi that arrived in a beautiful, rustic cast iron dish that sat on a wooden board. The meal had been cooked in their wood fire oven that sits proudly on display in the open kitchen. Soft pillows of light, smooth and fluffy potato sitting in a rich Napoli sauce, topped with cheese and basil.

Not only did this dish taste delicious, it looked delicious – beautiful vibrant colours of the tomato and basil made it picture perfect when it arrived.

The gnocchi was very quickly followed by lamb cutlets that were lightly French cut, served with asparagus wrapped in prosciutto and surrounded by a drizzle of yellow capsicum sauce.

The extremely tender grilled lamb was cooked to perfection, glistening in its own juice, topped with a light sprinkle of sea salt and blushing pink inside. I have always loved asparagus wrapped in prosciutto and this most certainly did not disappoint. The asparagus was cooked to perfection as was the salty prosciutto and the whole dish was enhanced by the delicious and mild flavour of the creamy yellow capsicum sauce. 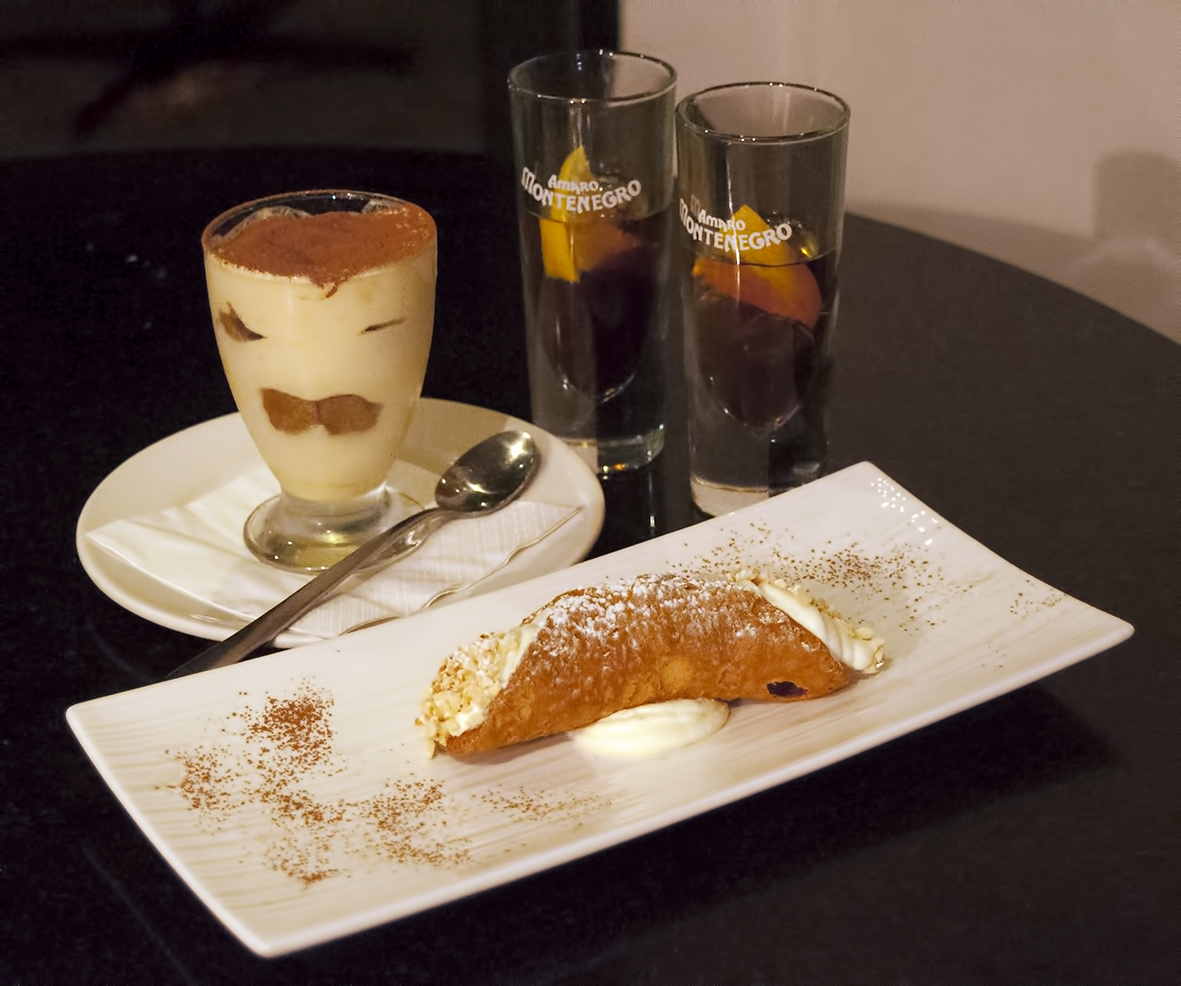 As we were both sitting back in our seats, wondering how we were going to be able to move with our very satisfied taste buds and equally satisfied, but overfull, bellies, dessert arrived – one Cannoli and one Tiramisu to share.

I honestly didn’t think I would be able to fit in another mouthful, but I was here to work, and work I would do – my readers would want to know what the desserts were like, so I put on a brave face and got stuck into this divine sweetness (the things I do!).

In a word – DELICIOUS. The cannoli was a crisp and delicious deep fried pastry tube filled with a rich and creamy ricotta and cream filling, and the tiramisu was decadent layers of cream and coffee soaked cake beautifully served in a glass.

Thankfully, with this rich decadence, we were also served some Amaro Montenegro which is a herb, spice and citrus based spirit said to aid with digestion as well as being delicious.

On leaving La Svolta, which at 9pm still had quite a number of seated patrons, I noted that most of the other eateries along Hampton Street were already closed or just about to close as they had no diners.

Obviously a well patronised eatery, La Svolta is definitely a favourite with locals and with very good reason. I loved my visit there and will definitely have it marked in my diary as a great casual dining restaurant in Hampton that transports your mind to the cobbled laneways of Naples or a picturesque countryside café in Tuscany or even a seaside eatery in Sicily.