South Yarra, Australia: The City of Stonnington skyline has changed forever – and for the better – after a property developer turned the wall of a South Yarra apartment building into a giant art gallery. 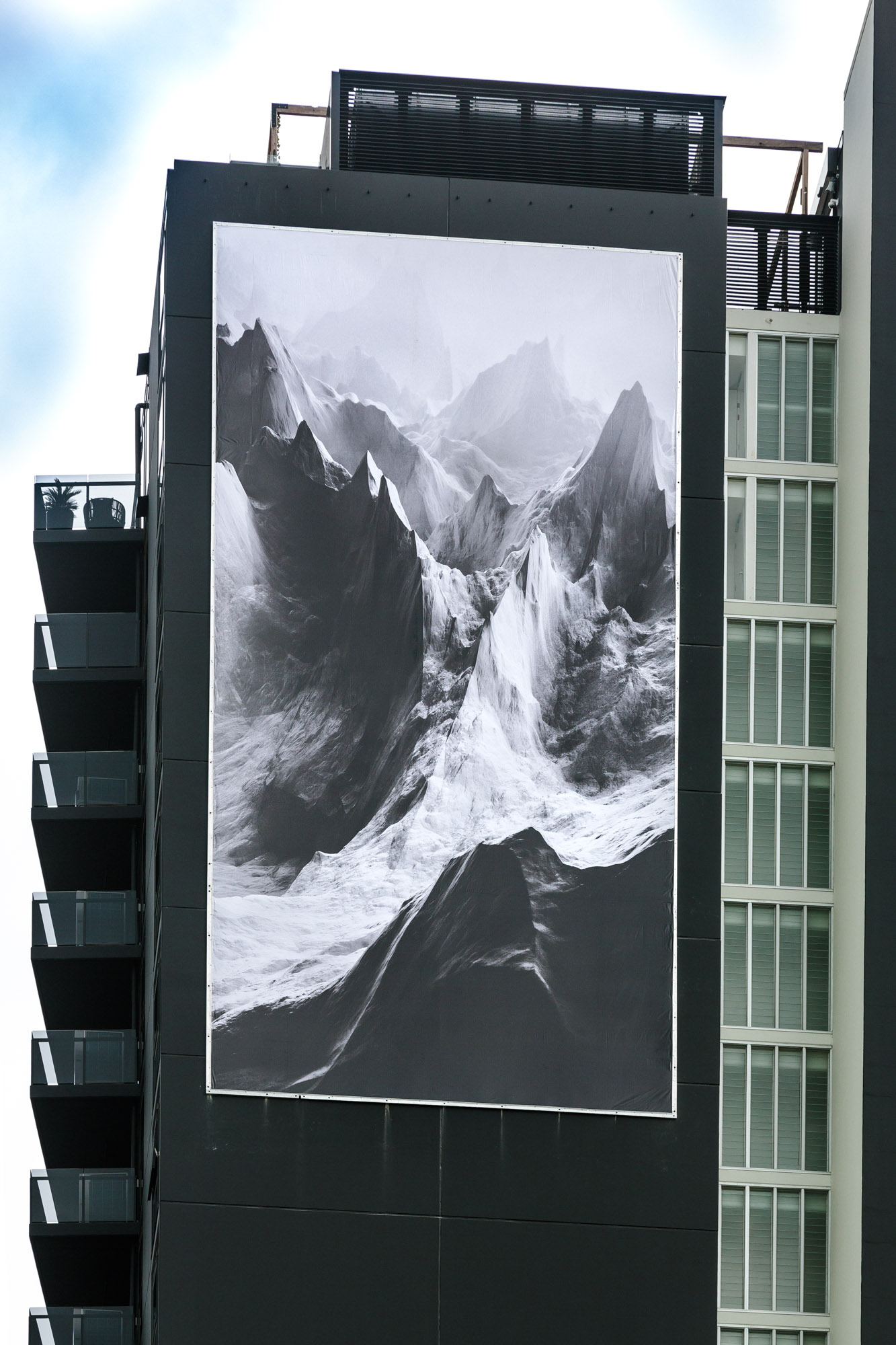 The concept is the brainchild of visionary developer, Michael Yates of Michael L Yates & Co, who last week revealed Cameron May’s winning entry in a photographic competition at an exclusive event in the penthouse of the company’s latest luxury apartment building, the 26-storey ‘Yarra House’.

Michael was inspired to transform a utilitarian wall into an aesthetically pleasing structure after witnessing other examples of public art.

“This came about through a suggestion made when we were getting the planning permit and I noticed there was a lot of artwork and sculptures at Docklands and other areas,” said Michael. The south side of this building is a 76 metre concrete wall, so we went to the trouble of rendering it and adding a couple of different paint colours, and now we have put the artwork up there.

Michael is now encouraging other developers to follow his lead.

Cameron May and Michael Yates.

“I may not be popular with other developers by saying this, but I think it should become a statutory part of permits because, selfishly, it attracts a lot of interest from our point of view, and in a very minor way we feel as if we are giving something back. I am very pleased that we have been able to do that.”

The artwork was unveiled by the City of Stonnington Mayor, Cr Claude Ullin, who was full of praise for the project.

“Michael and I have had many discussions over the years and I must say he is a fantastic entrepreneur because he understands just what art can do for a community,” said Mayor Ullin. We want a city that is glowing with art everywhere, so we will certainly be encouraging this with other developers.”

MARS Gallery Director, Andy Dinan, who was also on the competition judging panel, assisted in the curatorial mission, viewing the side of the building as an opportunity for emerging photographers to showcase their work.

“I looked up and I saw a gallery there, and I had for a long time been concerned about photography and photography students in this country not having an opportunity to show their work,” said Andy. “When it comes to emerging artists, no one wants to collect photography (so) I could see this as a vehicle to provide help where it was really needed.”

The competition received hundreds of entries, yet each member of the judging panel voted Cameron’s submission as the clear winner.

Cameron’s artwork ‘Fabrication 19095, 11603, – 162888’ is part of a series that explores artificial light and shadow. Inspired by the planet Mars, each image in the series is a landscape ‘photograph’, framed and captured within a virtual environment.

“I saw images come through from NASA and the Mars Rover and I was gobsmacked about how beautiful they were. I became upset that I wasn’t able to explore Mars myself,” he said.

“I tried to find a place within planet Earth that was interesting and I ended up photographing 250,000 images. During editing, I sat through all those images and I chose this particular image because the wall on the building is long and narrow, it is a very unusual format to work with.”

Cameron said he was elated to have won the competition and grateful for the opportunity it provides to further his career.

“I am in a state of disbelief and gratitude at the moment,” said Cameron. “I first saw it on the building yesterday from across the train yards. It really is a beautiful spot for artwork.”

“This is a giant leap for me because I am an unknown artist and while there are other opportunities for artists around, there is nothing on this magnitude or scale; it’s monumental.”