We’ve landed, collected our bags, picked up our rental car and are now heading off to Salinas, CA. 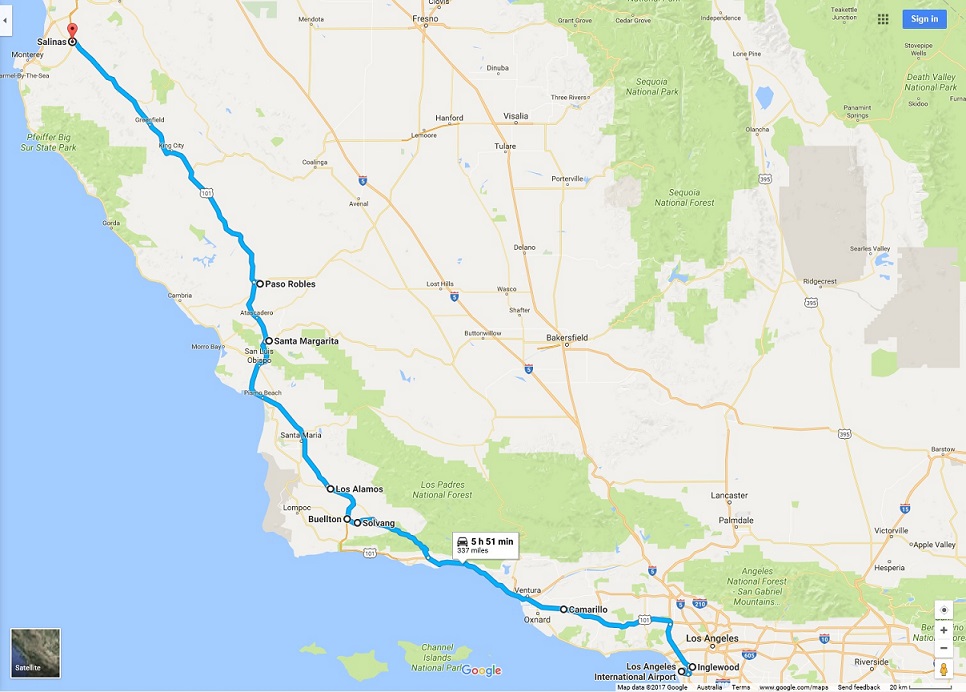 According to historic information, Salinas’ earliest inhabitants were small tribes of Native Americans who were largely undisturbed during the Spanish era. It wasn’t until Mexico gained independence from Spain in 1822 that outside settlers began to arrive in Salinas. Named for a nearby salt marsh, Salinas became the seat of Monterey County in 1872 and incorporated in 1874. The area is often referred to as ‘The Salad Bowl of the world’ fuelling a $2 billion agriculture industry supplying 80 per cent of the country’s lettuce and artichokes. 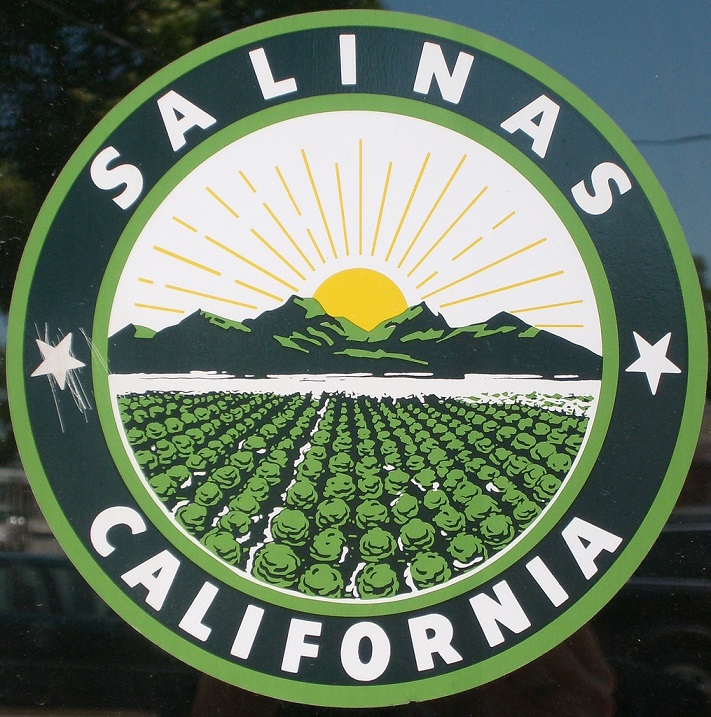 Many examples of Art Deco buildings remain including the Monterey County Courthouse and the Salinas Californian newspaper building. There are several other notable structures in the Salinas area including the Victorian house where author John Steinbeck was born. Our reason for visiting Salinas, well, it isn’t for the fruit and vegetables, but all will be revealed later. 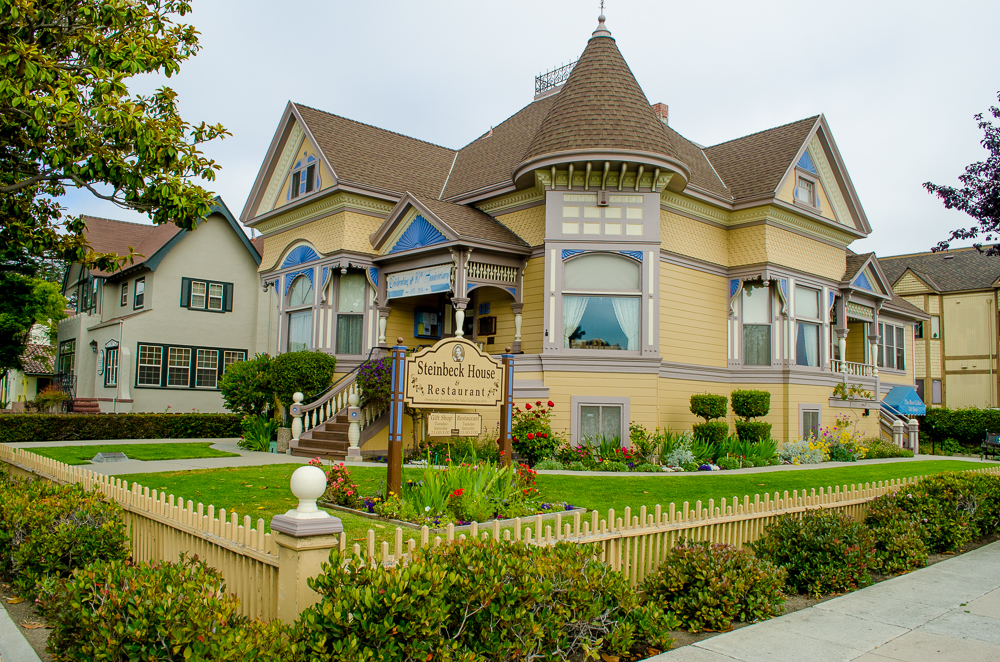 LAX to Salinas is just over a 5 hour drive, but we will be making many stops along the way, but first to Randy’s Donuts at 805 West Manchester Blvd, Inglewood for a quick breakfast in true American style.

Randy’s Donuts is a bakery and landmark building and while I honestly don’t know of any Americans who frequently have donuts for breakfast, the idea of this food being an American loved staple has to be tried and tested by a couple of Aussies! 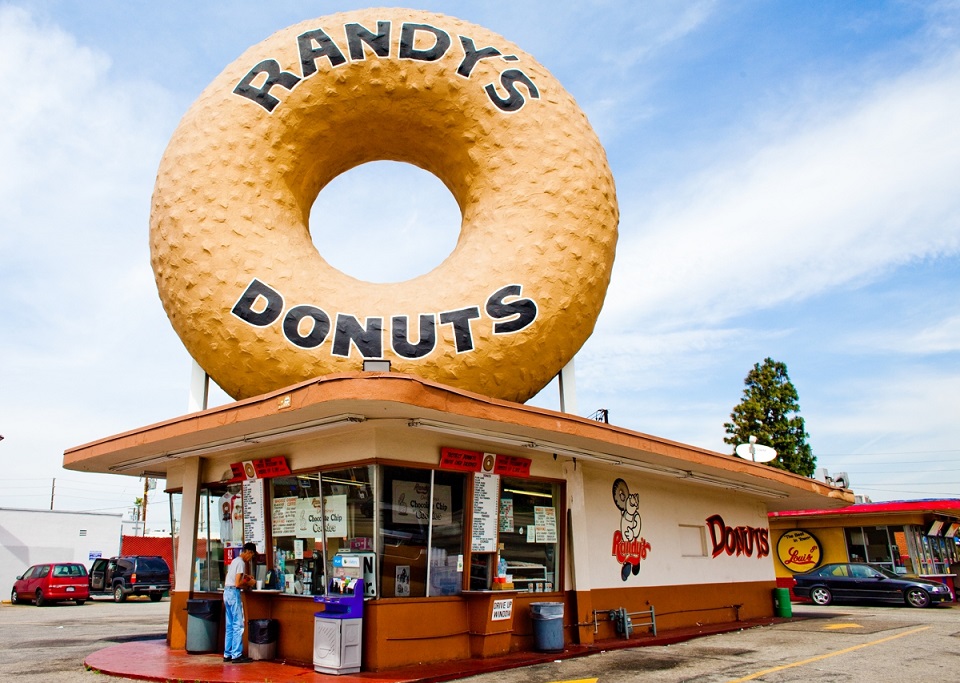 The menu is certainly not like that of any donut store in Australia, from plain cake, chocolate raised, sugar raised, glazed, crumb cake, chocolate sprinkles, maple iced, cherry iced, buttermilk, old fashioned, lemon jelly, apple crepe, bear claw, crullers (no idea what this is)  and heaps more that I have never seen before.

Tourists line up with locals to order their donuts at the windows where servers are waiting to take your order. We ordered coffee (which out to be undrinkable), 2 chocolate iced donuts, which were well below our expectations and a couple of souvenirs. We found our server to be most unhelpful and quite rude, this was not at all like the service we have received on previous trips to the USA, and due to the service and the quality of food, we won’t be back to Randy’s Donuts.

From Randy’s donuts we head to Camarillo premium outlet stores, roughly an hour down the 405 and 101 freeways. We have shopped here a few times before, and unlike Australian outlet stores, these have really good prices. I have vowed to not purchase anything as we are supposed to be on a one bag limit each until we return to Los Angeles at the end of our trip. We will be having lots of one night stops and the thought of lugging a multitude of bags in and out is not something either of relish. Darren already has plans to buy – I wonder how long each of us can stick to our bag limit?

With shopping bags stowed and coffees in hand, we head towards our next stop Solvang travelling through the always beautiful Santa Barbara – unfortunately we don’t have time to stop here.

Where does one start when talking about Solvang? This historic Danish village offers a relaxed and peaceful setting for any holiday. Vineyards, Danish pastries, amazing gift shops, an historic, wooden, horse-drawn street trolley, architecture that will have you believing you have stepped back in time to Denmark or Holland. 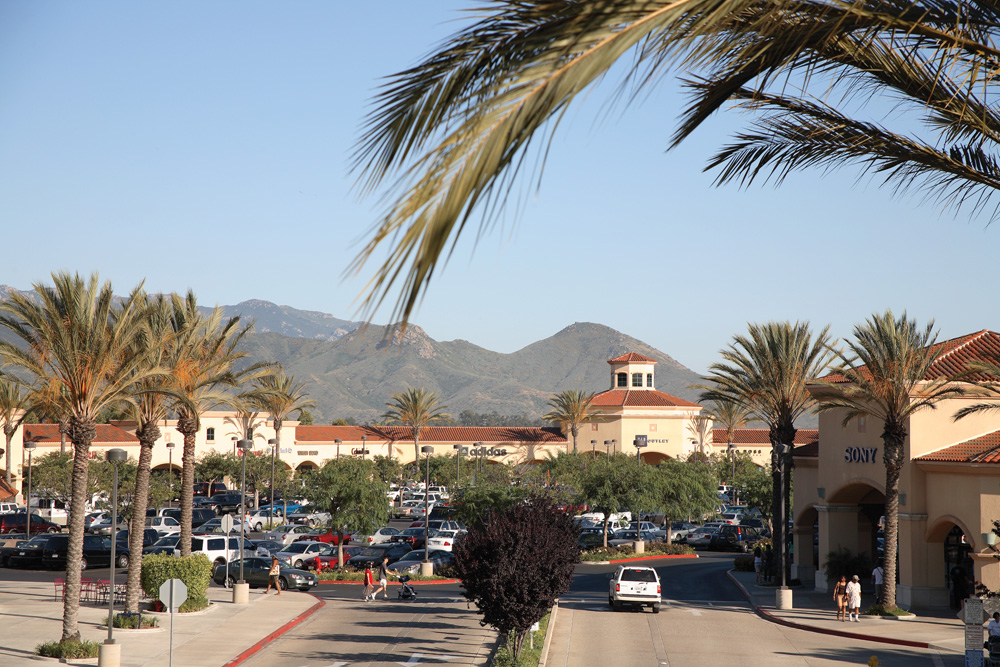 As we are on a pretty tight schedule, there is no time to have a look around, but having been here before I can say that it is definitely a town I want to come back to and spend some more time exploring.

Back into the car – Darren with coffee in hand again, me with a bottle of water – I HATE American coffee. Admittedly I am very much a weakling when it comes to coffee, anything brewed is too strong for me, give me a very weak and very milky Nescafé and I am happy, so this style of overly brewed, almost burnt and very strong beverage is not for me at all.

Next stop Buellton, 10 minutes up the road.

If you are into cars and history, then you will love the Mendenhall’s Museum of Gasoline Pumps & Petroliana at 24 Zaca Street, Buellton. 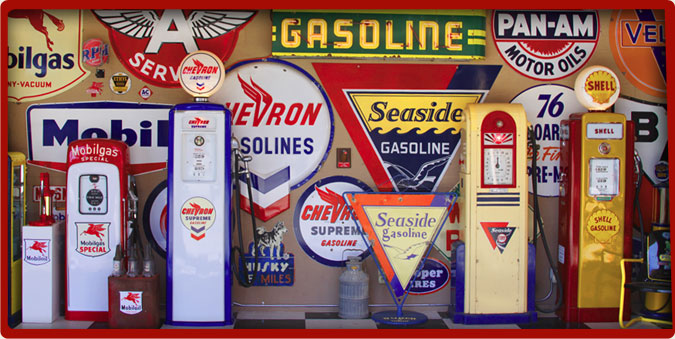 The Mendenhall Museum is a private collection located in California’s beautiful Santa Ynez Valley. The museum has one of the west coast’s largest petroliana collections including gasoline pumps, globes and porcelain gas, oil, and road signs. There are also race cars, racing memorabilia, license plates, gas & oil items, and other miscellaneous antiques.

This collection was started over fifty years ago by the late Jack Mendenhall and is carried on today by his son and daughter in law, Mark and Vickie. 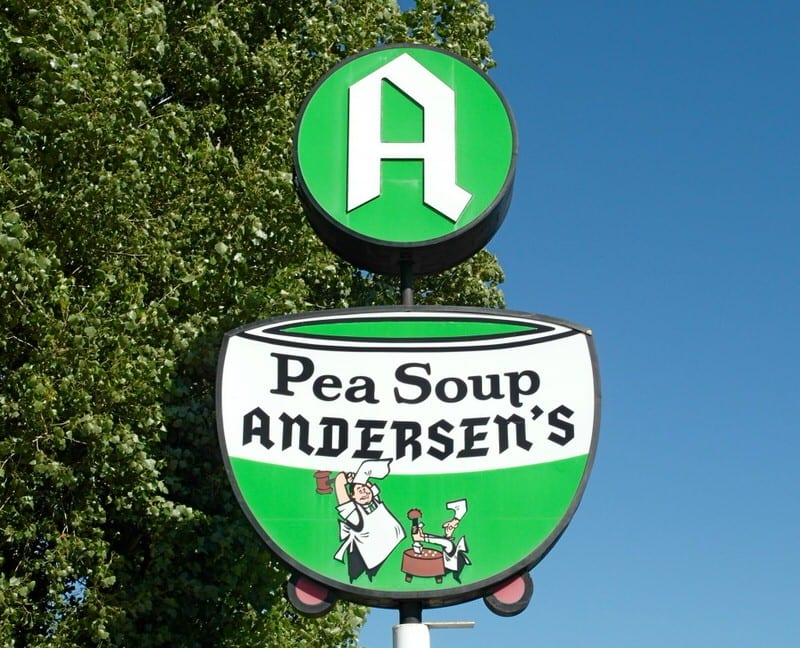 If you are in this area I can highly recommend a visit to Andersen’s Pea Soup and Inn. I haven’t stayed here before, but their pea soup is the best I have ever tasted. For those who aren’t fans of pea soup, there are plenty of other things on the menu which I am told are all delicious.

Los Alamos is our next stop – only 15 minutes driving time from Buellton.

Once a bustling town, Los Alamos is sadly a town that most people simply pass by – not us! 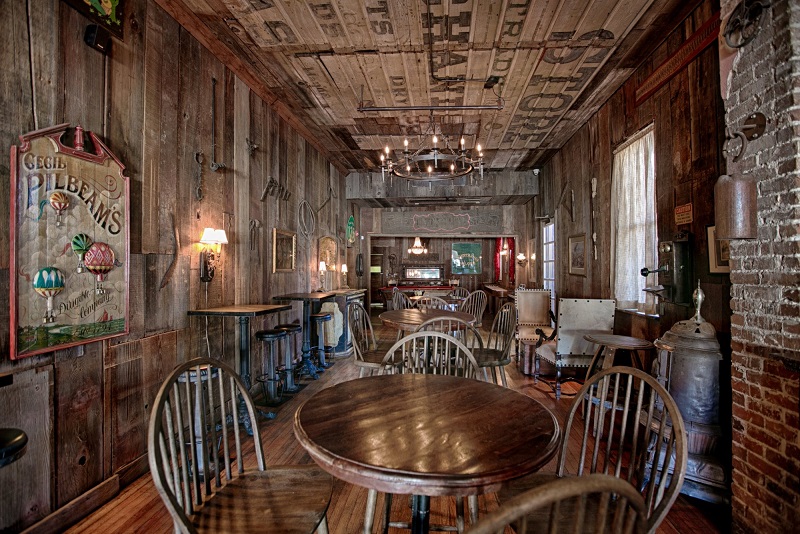 Having been here before we know that ‘small town’ doesn’t necessarily mean ‘nothing to do’. Once a stage coach stop, the town had a depot for the Pacific Coast Railway that linked San Luis Obispo and Los Olivos – it is the only surviving depot of the railway and now houses the Depot Mall – a wonderful antique barn with items you would never even dream of finding in Australia. From the weird to the wonderful, you will find it all here. 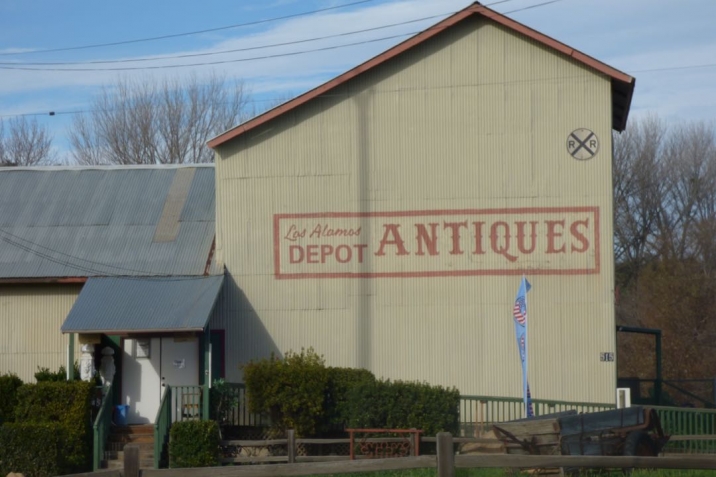 A two minute walk down the road and you will come to the Union Hotel. If you are looking for somewhere to have a drink that will have you believing you are in a saloon in the Wild West, this is it. You are advised to leave your pistols at the door and saddle up to the bar. Whether your style is more horse thief or cattle baron, soiled dove or proper lady, all are welcome! The 1880 Union Saloon has been serving customers of all kinds since the late 19th century, when stagecoach Charlie’s, buckaroos and sage hens alike would toast to another long, hard day.

Local Wells Fargo agent J.D. Snyder built the 1880 Union, a stagecoach home station complete with store and lodging. It burned down on February 16, 1893, but was rebuilt in 1915 by J.P. Loustalot as a hotel and saloon, and has operated as such since then. In 1972, then owner Dick Langdon restored the Union to its original condition, hiring an expert cabinetmaker to meticulously rebuild a replica of its 1880 façade.

We ordered a tri tip sandwich (steak sandwich) which was really delicious and super tender. I ordered my first cocktail for the trip a Fancy Pants – DELICIOUS!

Time is well and truly getting away from us, we still have a long way to go, lots of things to see and do, so after only one drink in this history steeped hotel, it’s time for us to hit the road again.

Oh, and after visiting the Antique Barn our one bag limit each isn’t looking too good.

The next stop we have planned is at Santa Margarita – not for anything special just time to wander around and stretch our legs.

Santa Margarita is a very quaint town with lots to offer. For us it was just a quick stop but if you are looking for somewhere to spend some time away from massive crowds, this is the place. There is plenty to do if you want to do it, or you can sit back, put your feet up and watch the world go by. There is an adventure centre, lots of wineries in the region, antique barns and horseback riding. Santa Maria, Pismo Beach and San Luis Obispo are beautiful towns you pass through on the way to Salinas. This entire region is known for its beautiful scenery and hundreds of wineries.

Unfortunately we are on a very tight schedule and have to keep on moving, but if you have more time to spend in this region, plan a day (or more) at Atascadero where you will find the Lake Park, Charles Paddock Zoo, Sunken Gardens and Bristols Cider House – all very worth seeing.

A little further on and you will go through Paso Robles – more wineries, stunning scenery, the Estrella Warbird Museum and Hearst Castle.

Again, no time for us to stop today, but from past experience I can highly recommend taking a tour at Hearst Castle – the history, opulence and extravagance at this estate will have your mind boggling. 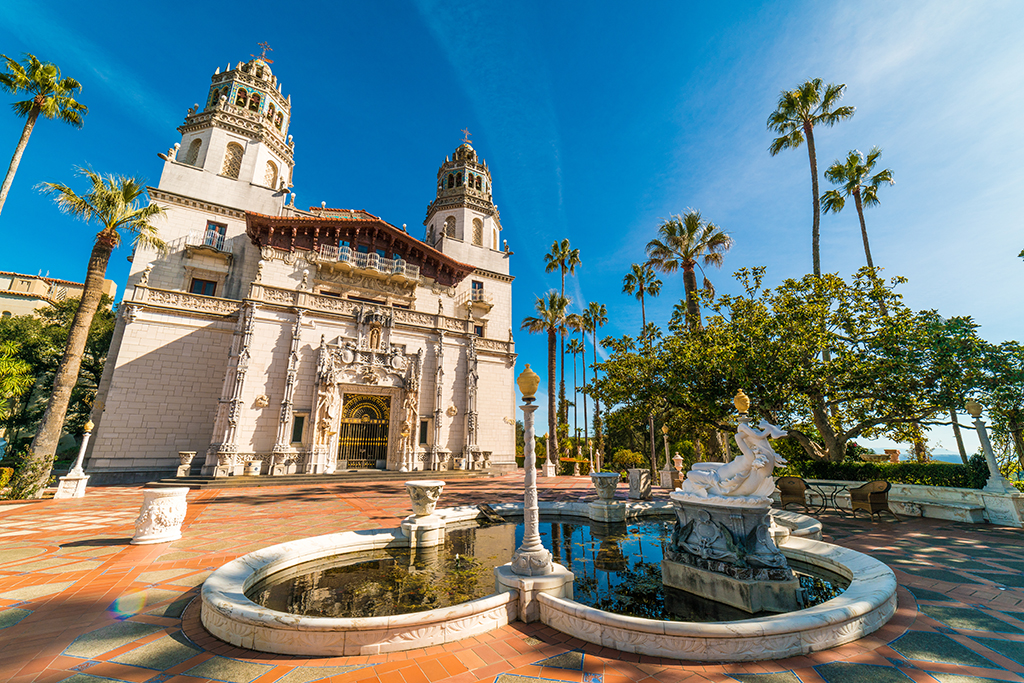 From Paso Robles we have the option of going two ways to Salinas – up Highway 101 which is roughly one-and-a-half hours going through San Lucas, King City, Greenfield and Soledad, or the more scenic coastal route through Cambria, San Simeon, Pfeiffer Big Sur State Park and Carmel by the Sea. I would dearly have loved to have chosen the coastal route, but it’s longer and we are tired – it’s been a long time since we departed Melbourne. There is also some issue with road along the coast – we have been told that there were some landslides due to weather conditions a few months ago and it is unlikely that the road has been fully re-opened as yet – Highway 101, here we come.

6 hours driving and 345 miles under our belts and we have arrived at our accommodation in Salinas – SLEEP TIME – we are exhausted.