It’s difficult to know just what the attraction of climbing the Sydney Harbour Bridge is.

Perhaps it’s the challenge of climbing more than 1000 steps to a height of 134 metres above sea level. Maybe it’s the incredible 360 degree view of the world’s most beautiful harbour

Whatever it is, I found the allure of BridgeClimb irresistible, and I am not alone. In the 19 years since it began, more than 300 million people have completed the climb and the crowd numbers show no sign of slowing down. Depending on the time of year, BridgeClimb hosts around 4-500 people per day – about 180,000 a year. 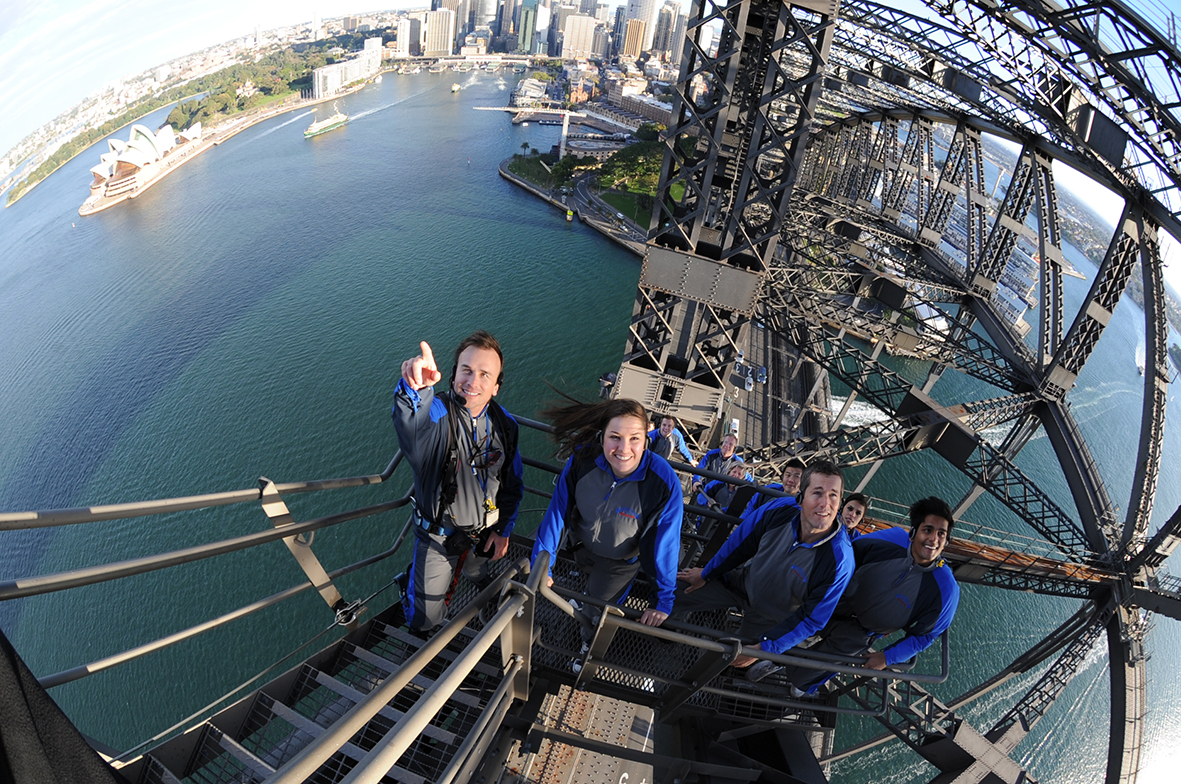 BridgeClimb’s founder, Paul Cave, has his own idea of what draws people to this unique activity.

“(The bridge) is partly a signature of Sydney, its symbolic for this country,” Paul told prodijee. “You think about the significance of that bridge, its design, its location on the harbour and its distinctive shape. It’s part of Australia’s brand, like the opera house and the harbour; things that are significant about this country, so therefore people think about climbing it. It’s the exhilaration of doing it, the challenge and it’s the panorama (afforded by) the 360 degree view.” 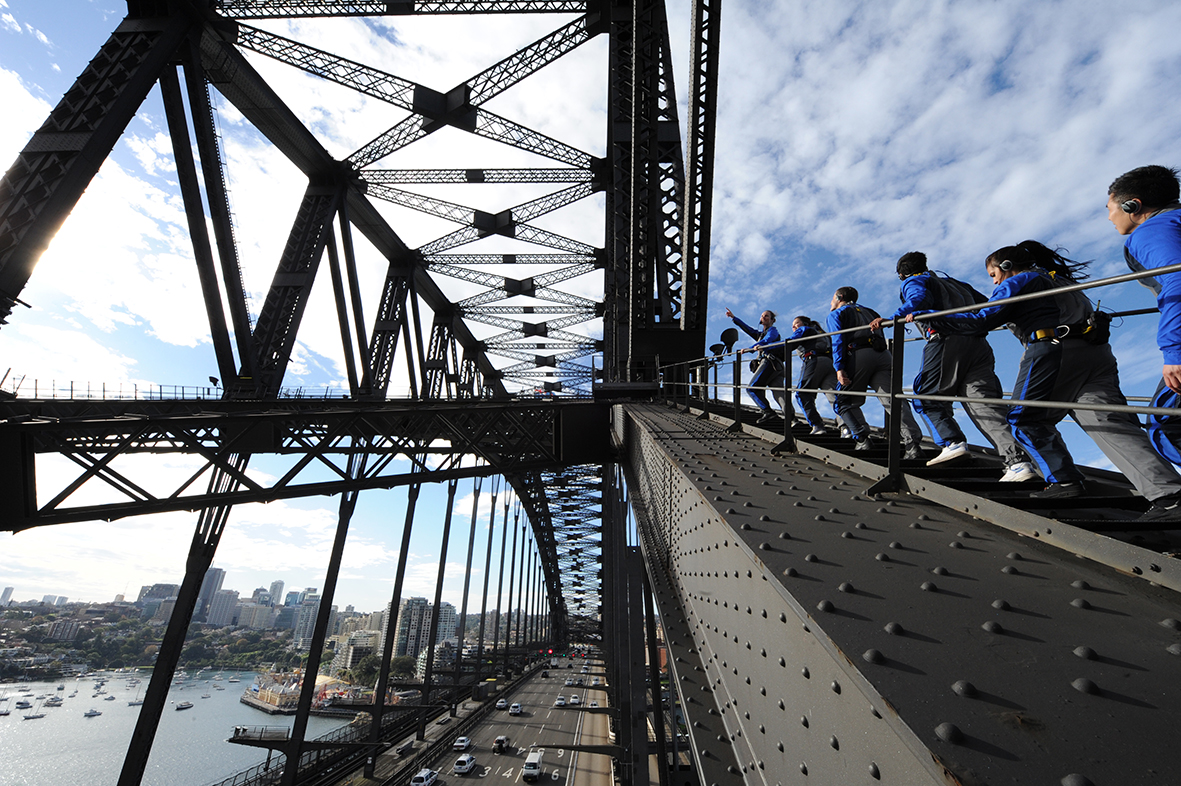 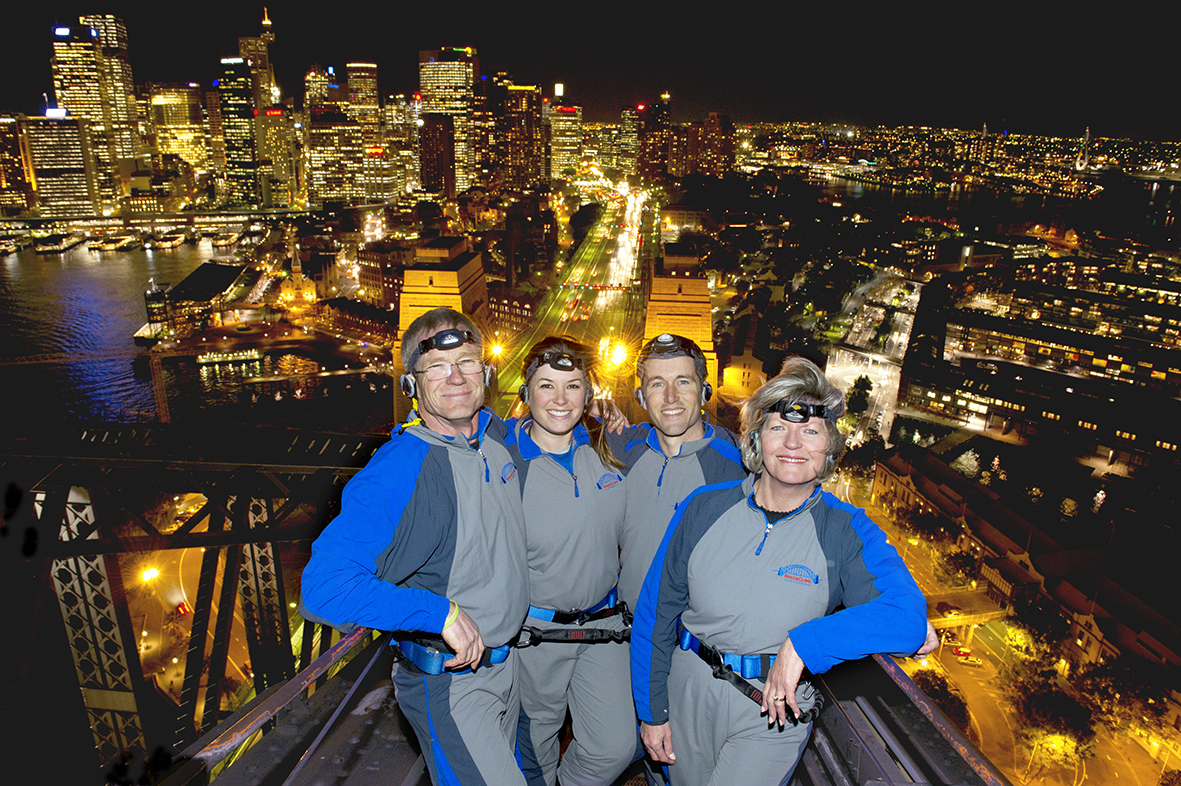 Climbing the Sydney Harbour Bridge is clearly physical activity; however it’s not as demanding as you might think. If you need proof of that, consider that BridgeClimb once hosted a lady who made the climb on her one hundredth birthday!

Still, to make sure you are capable of safely making the trek to the top, BridgeClimb asks some very detailed medical questions.

“Our shift supervisors spend half their time assessing people for climbing,” explained Paul. “They might be three months pregnant, or whatever. We climb deaf people and blind people; we hadn’t thought in the early stages we would be doing that. I’m amazed at the number of people we have got up there that we didn’t think we would. 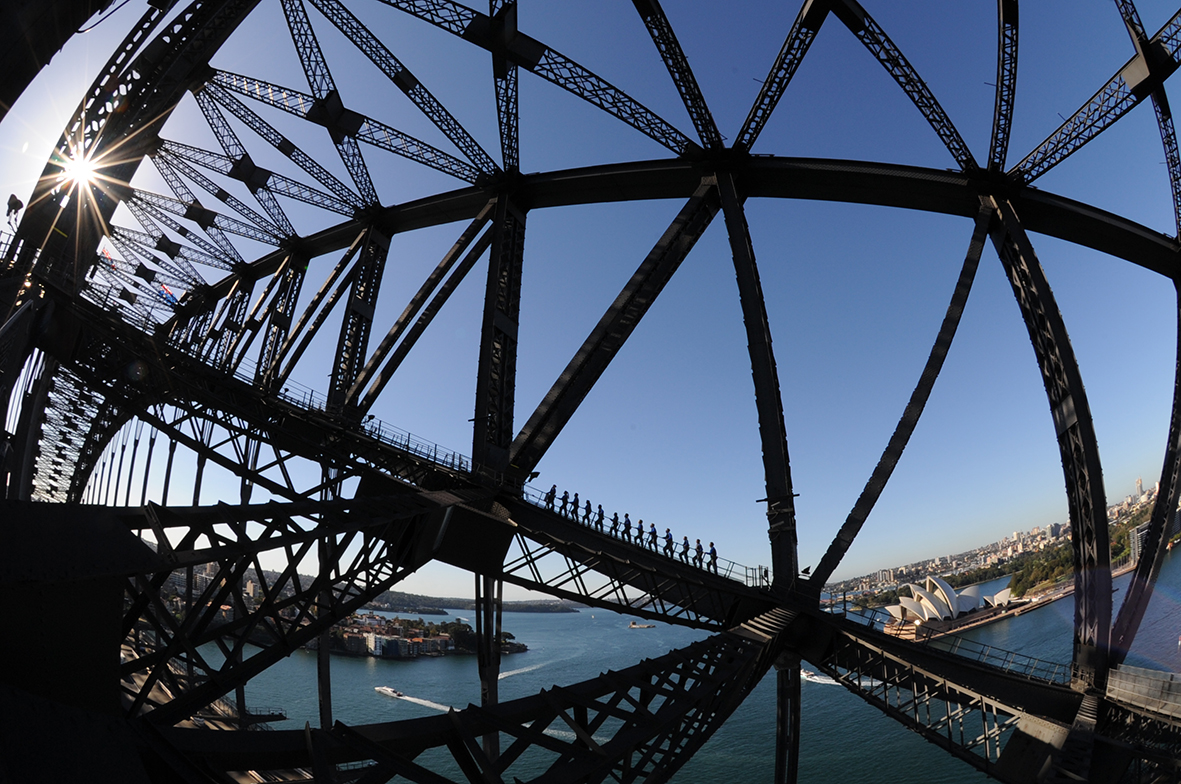 “We have had people carried by two other people; we have had quite a lot of people on the back of someone else. Our staff really likes the challenge of helping people.

“These days we get people who, a week ago, had (heart) bypass operations and they want to climb the bridge today. We wouldn’t have been asked that question 10 years ago. People would wait six months. The world now has this instantaneous desire to do things.”

While people may think the climb is dangerous, the organisation and an enviable safety record.

“The most challenging thing for us is people coming off aeroplanes and wanting to climb the bridge on the same day that they have landed. Their body time clock is still somewhere else, or they have alcohol in their system, or they are dehydrated.

“Dehydration is a huge issue so we sometimes get people fainting as they don’t want to drink as they are worried about wanting to do a ‘widdle’ while they are up on the bridge.”

Given the bridge’s height and the fact that it is situated over water, and has road and rail traffic on the deck below, climber safety is paramount. Nothing is left to chance.

Each climber is required to wear a special overall and leave all accessories behind in a secure locker. Even tissues aren’t allowed, as one could float down onto a car travelling on the bridge below and cause a major traffic accident. 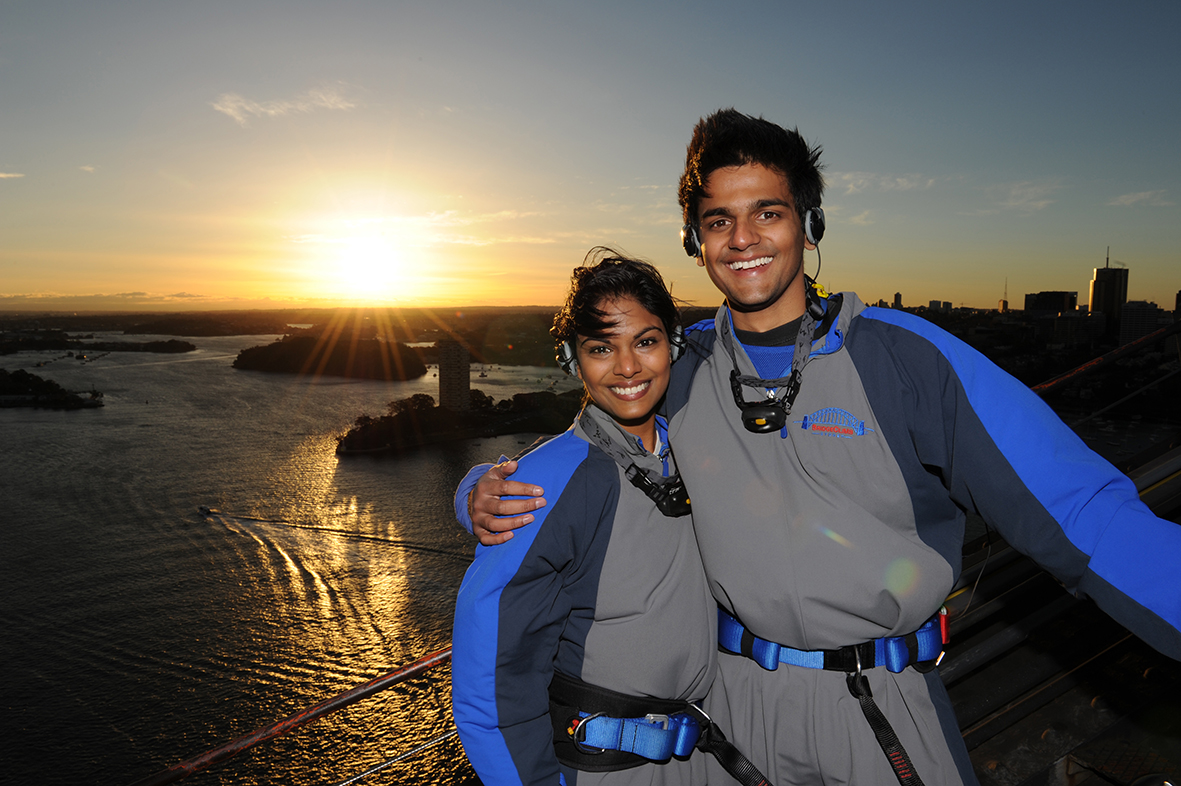 Subsequently, climbers are also issued with a handkerchief, cap and jacket that remain attached to them at all times. A radio is also provided, so you can hear the live commentary. Once the climb commences, you are securely tethered to the bridge, so there is no chance of falling.

This attention to detail creates a very reassuring feeling, so it’s no wonder less than 20 people per year fail to complete their climb.

“Probably 95 per cent of them find the solution that enables them to finish it. If they definitely can’t finish it, we will have someone come up to join them and take them back down.”

For the overwhelming majority of people who make it to the top, the view is breathtaking, full of iconic landmarks in every direction – The Sydney Opera House, Circular Quay, the city skyline, Fort Dension and the North Shore in the foreground. 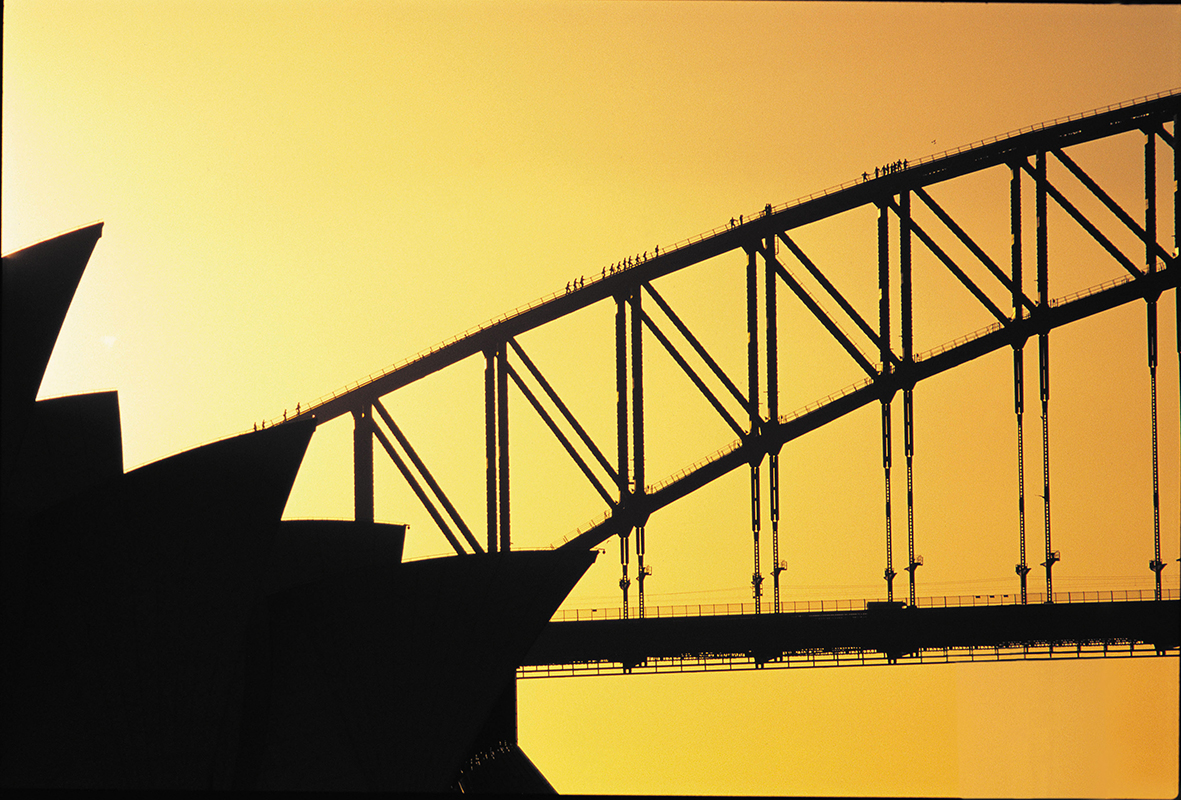 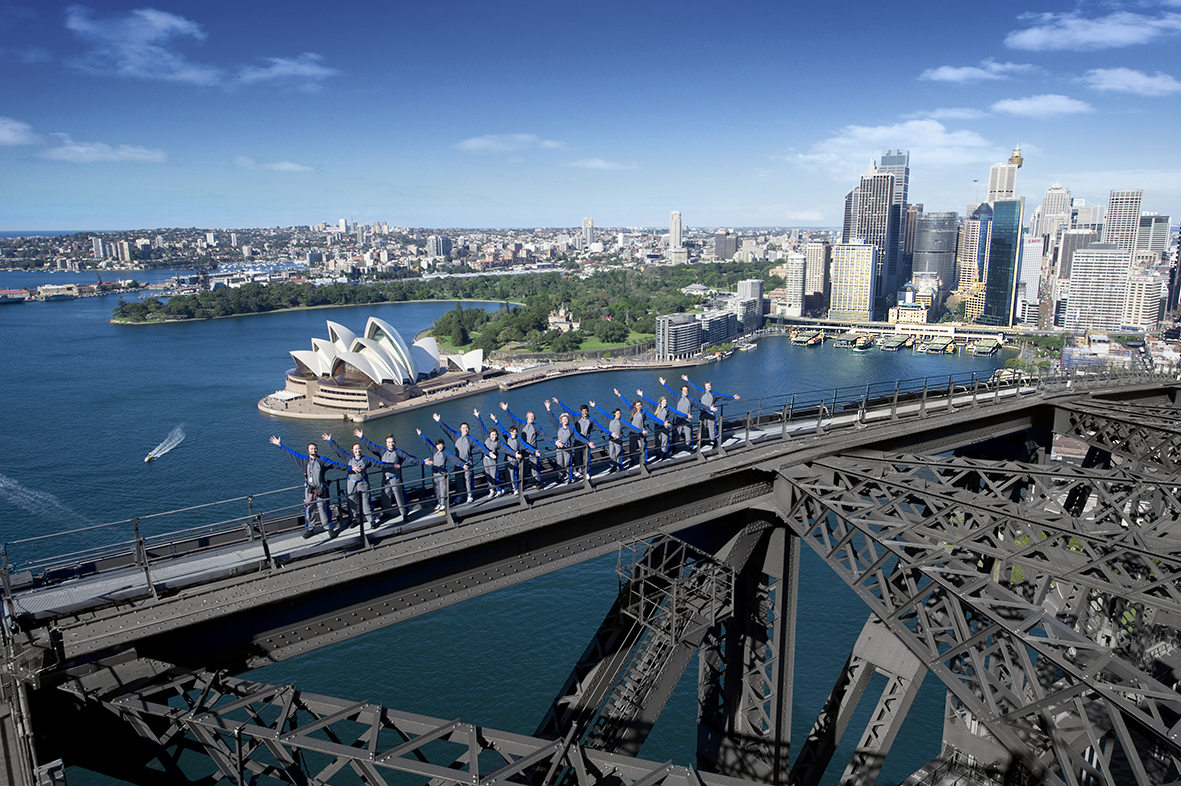 Further out and to the east there’s The Heads that mark entrance to the famous harbour, and Historic Balmain to the west, though the view goes well beyond those two locations.

Arriving at the top provides a remarkable sense of achievement. BridgeClimb truly is a unique experience and definitely a ‘must do’ activity when you are in Sydney.

And though you are not permitted to take your own camera, your climb leader takes plenty of shots to keep the memory alive.