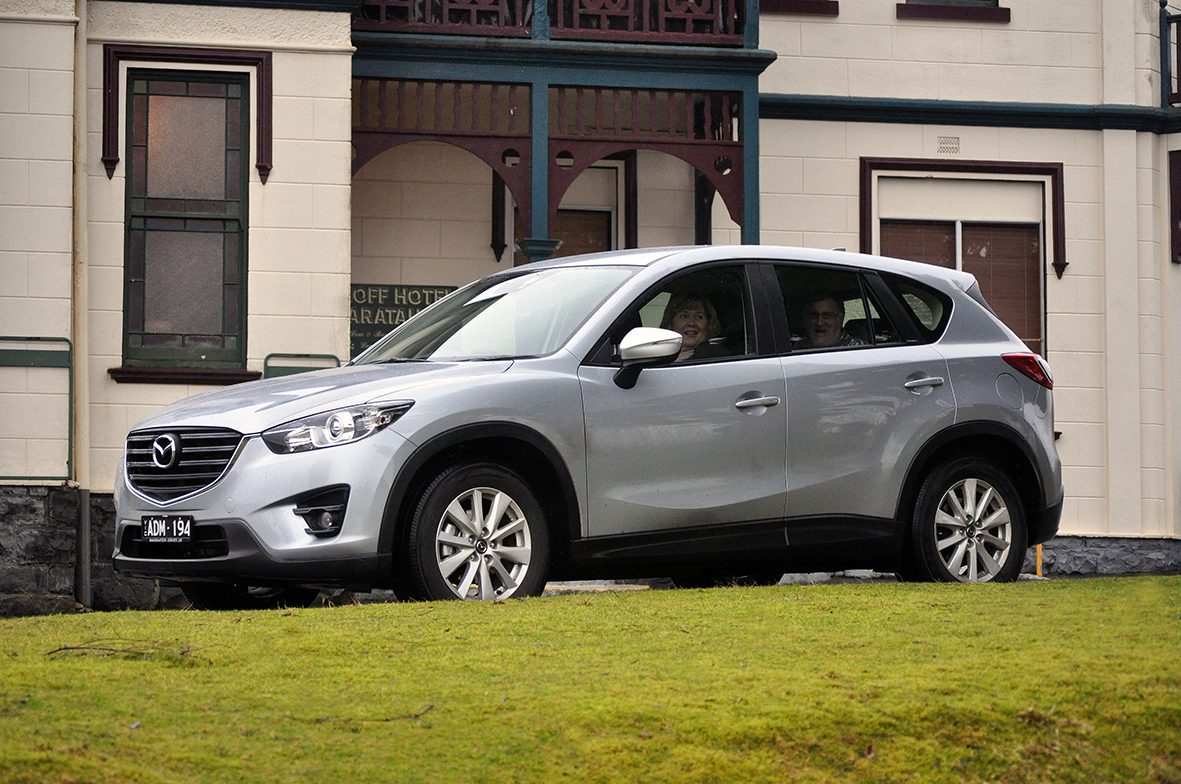 We’ve previously brought you our initial drive impressions of the Mazda CX-5 but recently we had the chance to conduct an extended road test during a 10-day exploration of Tasmania.

With a multitude of conditions throughout its unique and extremely picturesque environment, Tasmania’s ever-changing topography provided an ideal opportunity to conduct a real-world evaluation of the medium-size SVU and test features – particularly those related to comfort – not always experienced in short commutes. 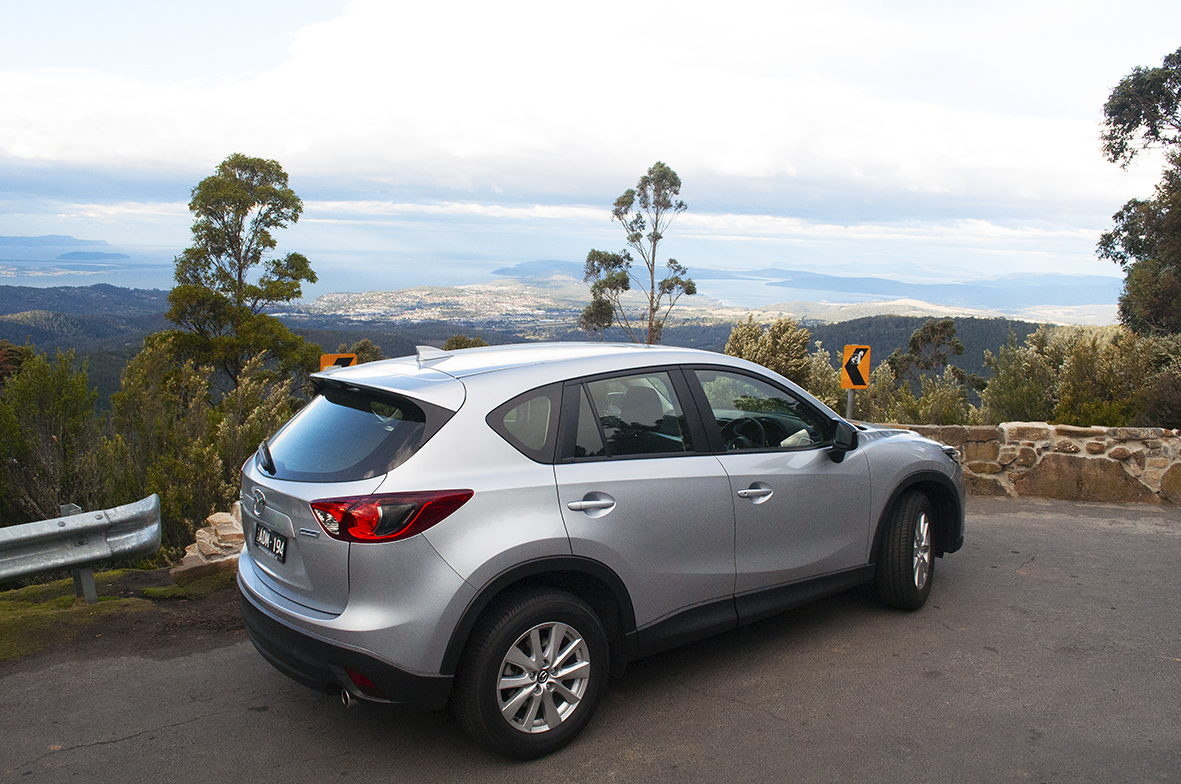 First and foremost, the isolation of Tasmania’s wonderful wilderness areas demands a reliable vehicle. As the country roads are often narrow and winding, and many of Tassie’s roads are snow and ice covered even in summer, we also needed a vehicle that is sure-footed in all conditions.

And with Lifestyle Editor, Carol Sheridan, and Food & Beverage Editor, John Anthony on board for the 10-day expedition, we needed a vehicle that could accommodate three adults and a heap of luggage, as well as being quiet and comfortable. 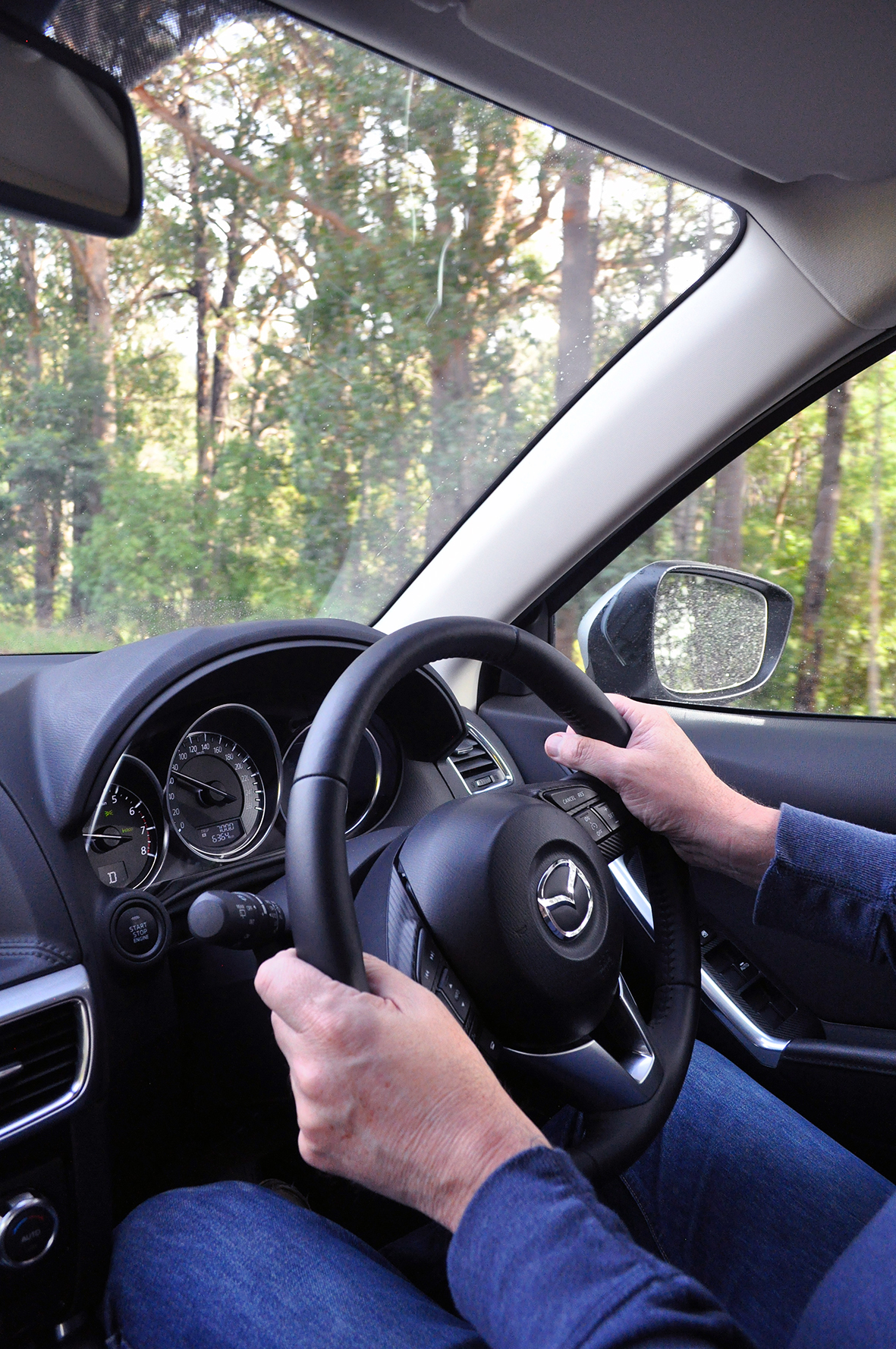 While the CX-5 could have accommodated a fourth adult it is more suited for a typical family passenger load of two adults and two kids. The soon to be released CX-9 would better suit travelling with four adults.

While large enough for our purpose, CX-5’s agility was immediately noticeable upon driving onto the Spirit of Tasmania ferry. Driving to our designated parking spot necessitated some very tight turns and driving down steep and narrow ramps, but the car handled these somewhat tricky manoeuvres with ease. 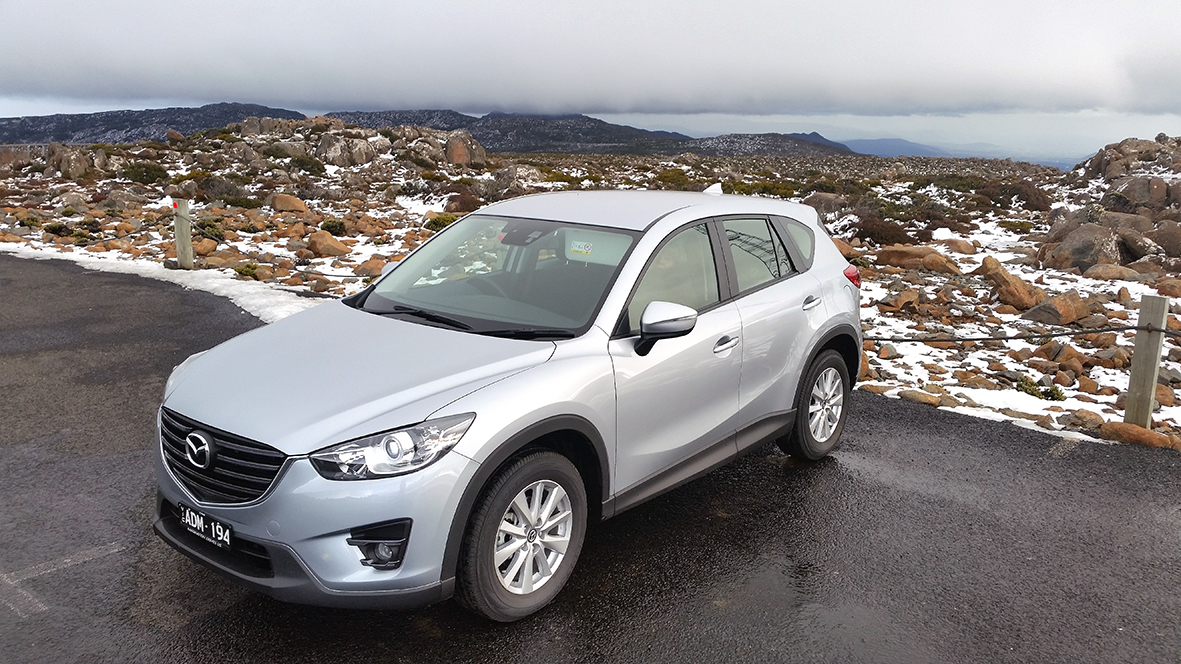 Our drive from Devonport to Hobart reinforced what we had already come to know – that despite its off roading capability, on the highway CX-5 is as comfortable, effortless and satisfying to drive as any family sedan. With low road noise and comfortable seats, we arrived in Hobart following a three-hour drive feeling fresh.

We made good use of the numerous drink holders, while John Anthony gave the connectivity his seal of approval as he Bluetoothed the tunes to the sound system from the back seat via his iPhone. The GPS was also easy to program and provided clear, accurate directions. 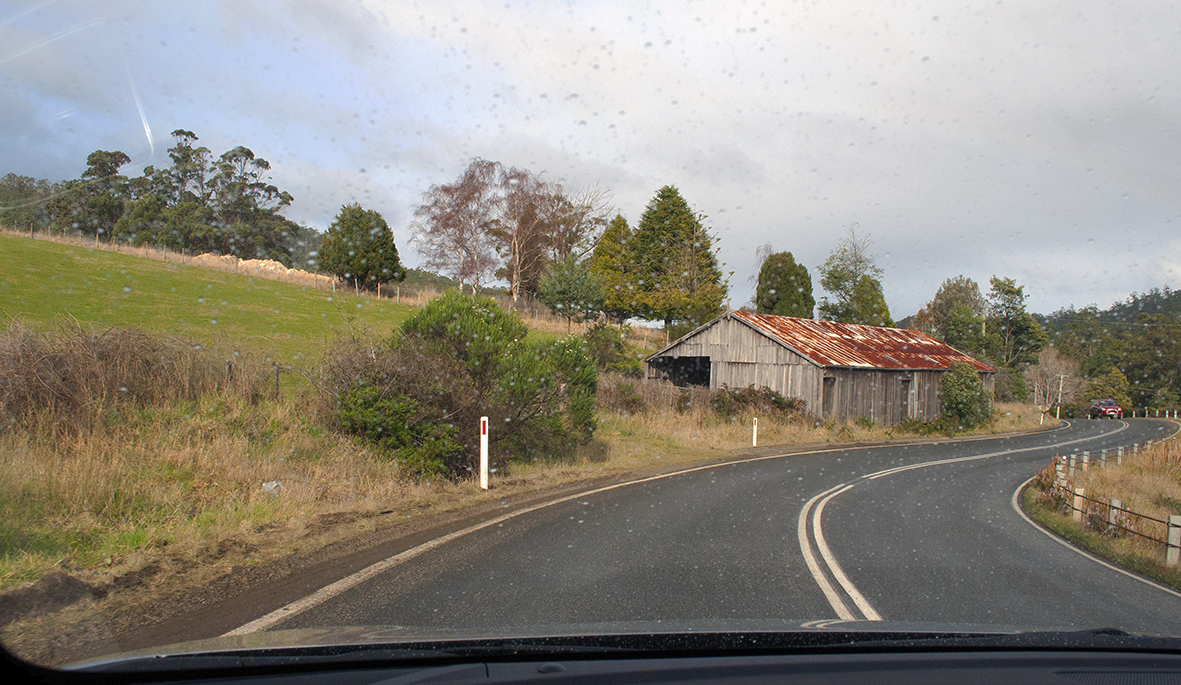 Power was more than adequate to transport three adults and a cargo area filled to the brim; in fact it was difficult to detect any power drop off with the heavy load on-board. The 2.5-litre petrol Skyactive engine cruised effortlessly up steep hills and had plenty of torque to pull the car out of slow, tight corners.

A drive up Tasmania’s famous and spectacular Mt Wellington the following day had us pleased that we were in an all-wheel-drive vehicle. SUVs are often criticised for their limited off-road capability compared to full off-road 4x4s, but there are plenty of conditions where all-wheel drive is a definite safety advantage on bitumen roads. This was one of them. 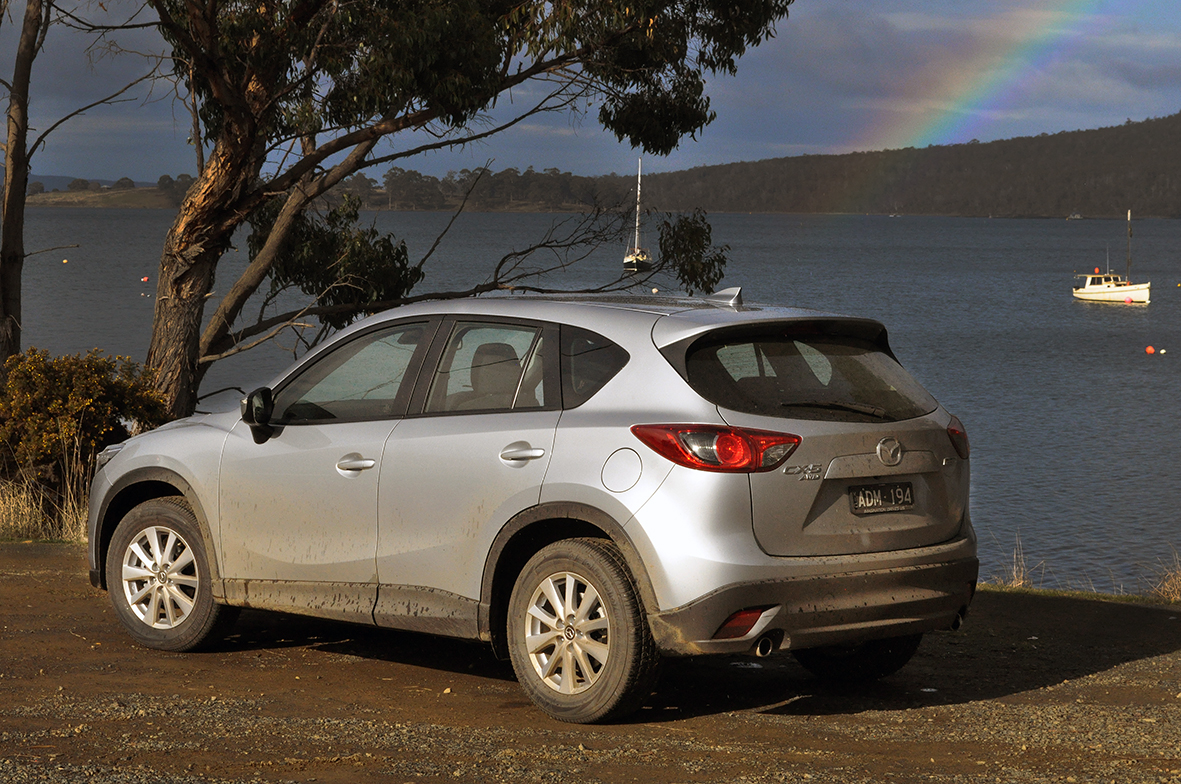 At ground level the weather was sunny and pleasant, prompting us to feel any car would be fine to travel the steep and winding road but as we gained altitude the conditions rapidly deteriorated.

Approaching the top, the snow-lined road began to ice up, and it was good to have the all-wheel-drive system on-board. 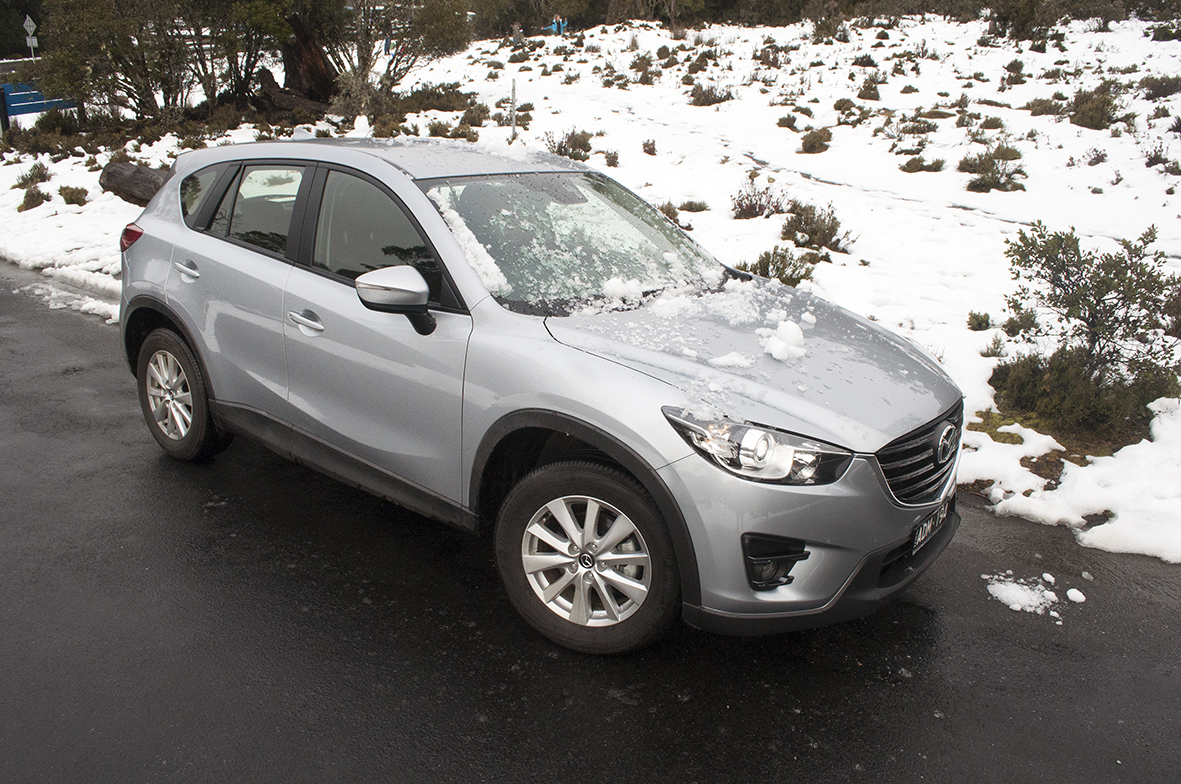 The deteriorating conditions also proved ideal for demonstrating CX-5 build quality. From inside the car the weather appeared to be cold and windy but upon alighting, it immediately became apparent that there was a sizeable gale blowing. The wind speed was enough to rip the doors out of our grasp, prompting fears of panel damage, but the Mazda took the beating without flinching.

Very similar conditions were experienced at Cradle Mountain – there was less wind but lots more snow and ice on the roads. Again, it was reassuring to know that with the SUV’s stability we wouldn’t be sliding off the road and getting stuck in the freezing wilderness. 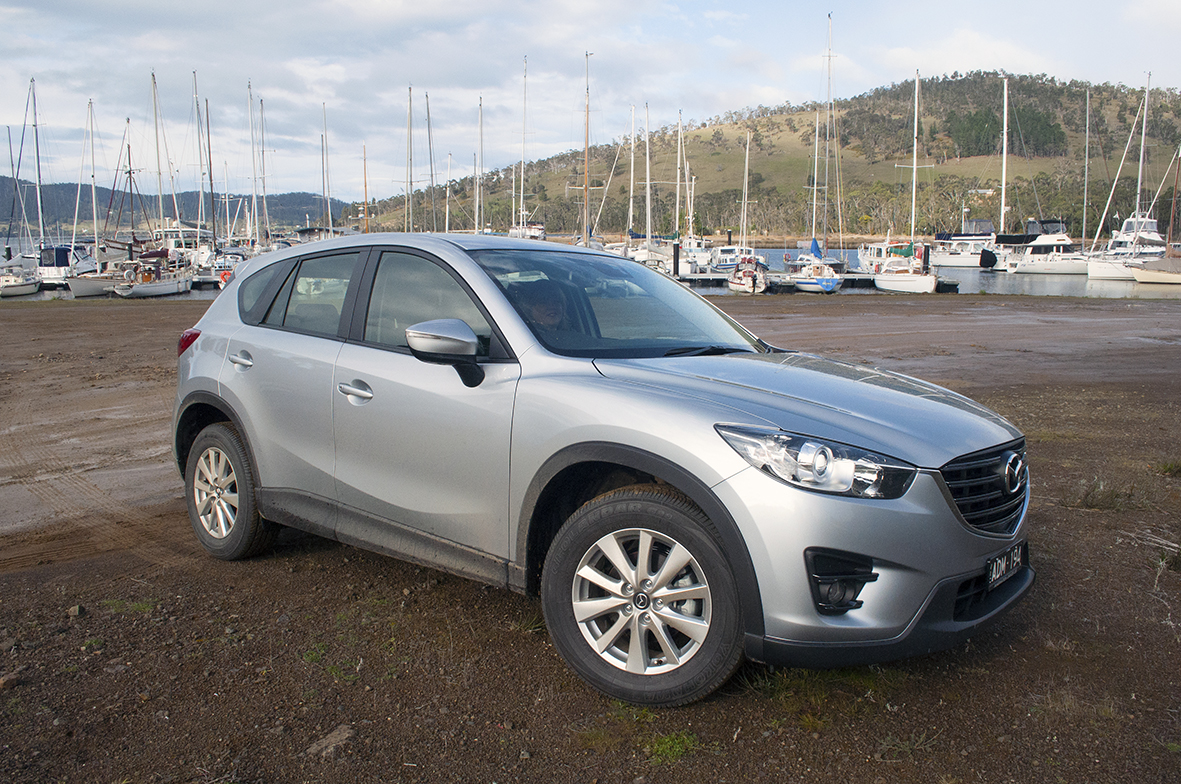 Of course not all of Tasmania was under snow, and we found ourselves on some of roads used in the world-famous tarmac rally, Targa Tasmania.

Now, a medium SUV is not the type of vehicle an enthusiastic driver would choose to run on these roads but when we came across a sign signalling the start of Elephant’s Pass, we couldn’t help but have a ‘go’. 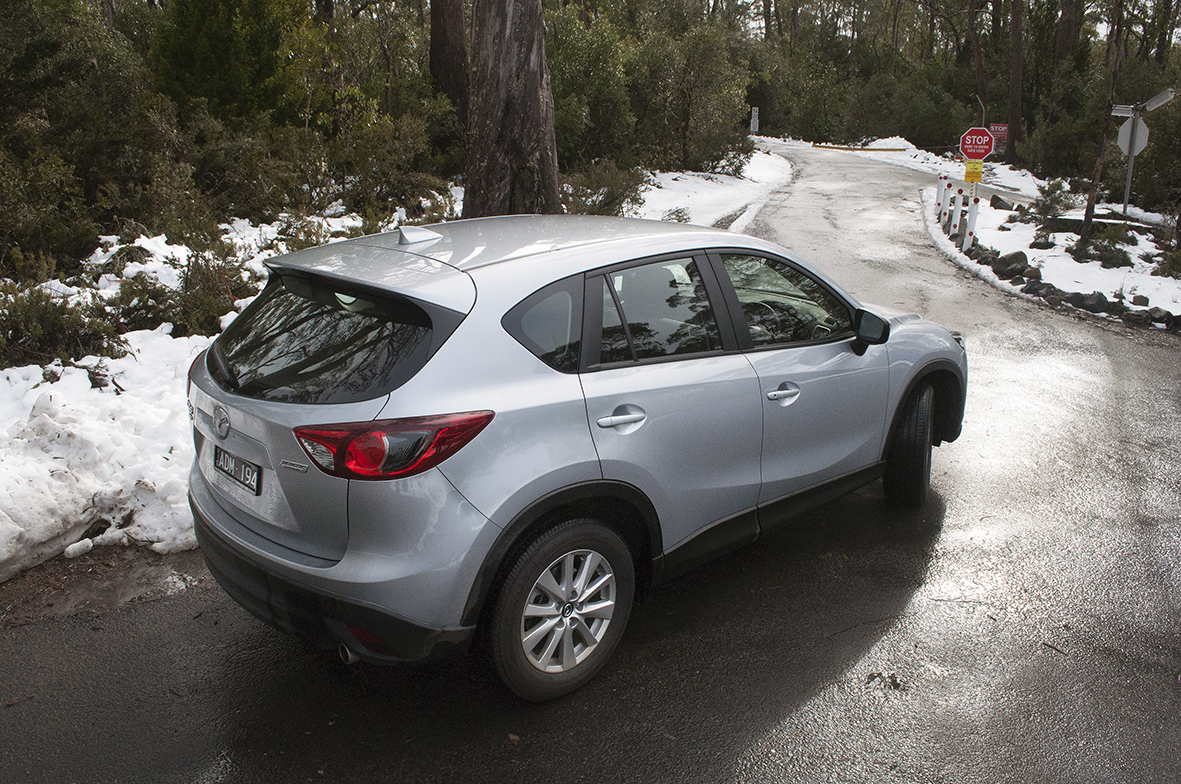 Surprisingly, CX-5 handled the roads with ease, demonstrating impressive roadholding, handling and braking, which made the run more than satisfying from a sporting driver‘s point of view. Sure, a car like Mazda’s mighty MX-5 would have been more suited to the road, but I have no complaints with how the SUV transgressed the challenging, winding road.

Overall, CX-5 proved an ideal vehicle for our Tasmanian tour. If you’re looking for a family car that not only works around town but also lets you get away for the occasional road trip, CX-5 is well worth a test drive of your own. 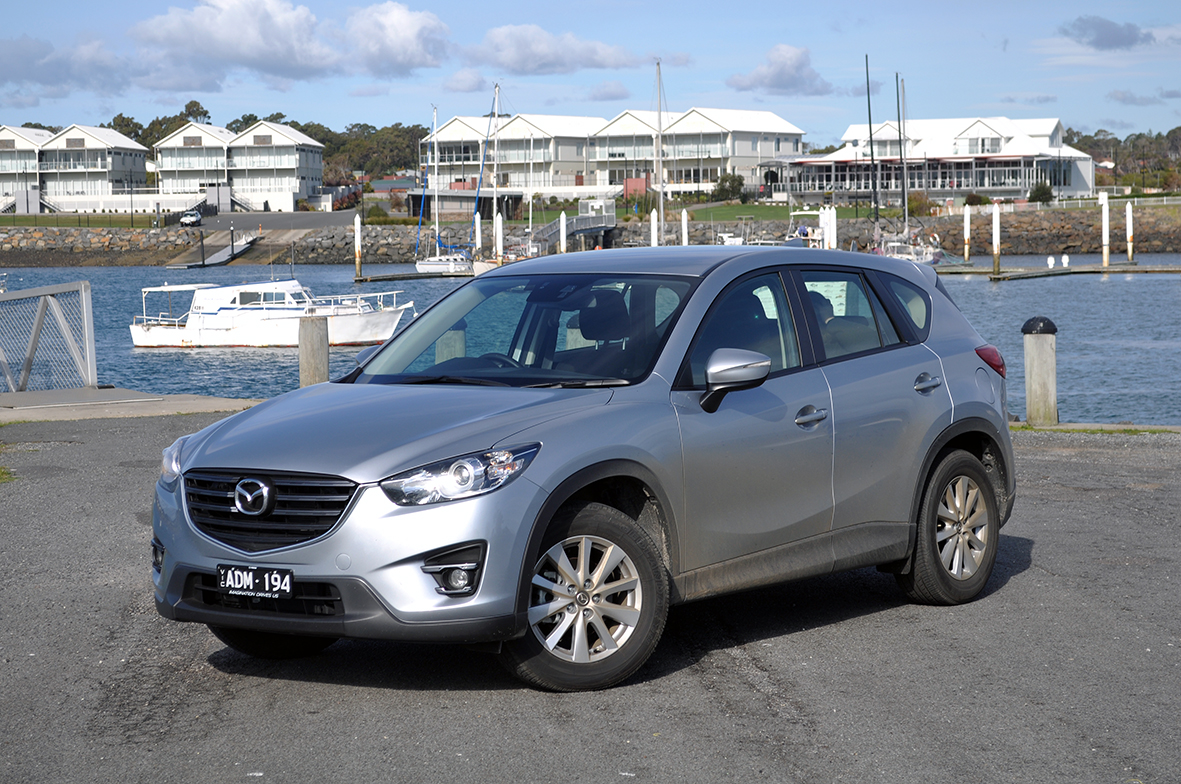