Nieuwegein, THE NETHERLANDS; KLM (Royal Dutch Airlines) – one of the most renown and the oldest Dutch airliners and now part of the AIR FRANCE Group recently announced an agreement with Teleena, a leading Mobile Service Enabler (MVNE).

Both teams agreed to use Teleena as provider for the ‘iPad4Crew’ with the main goal to improve KLM pilots and cabin crew’s work efficiency by decreasing paperwork to a minimum whilst maintaining the highest level of security.

KLM wants to be the customers’ first choice, to be an attractive employer for its staff and to create sustainable growth with smart partnerships and pioneering new destinations. More than 32,000 KLM employees work to provide innovative products for their customers and a safe, efficient, service-oriented operation.

“For KLM it’s a challenge to be at the forefront of the European airline industry,” said a company spokesperson. “Responding adequately to market opportunities and technological developments is therefore key.

“The initial challenge with ground and flight personnel is being repeatedly engaged with large amounts of paper work needed to administer flight schedules and passenger lists. Providing the cabin crew and pilots with a secure iPad solution makes a huge different in saving time and paperwork which has resulted in a significant cost reduction.” 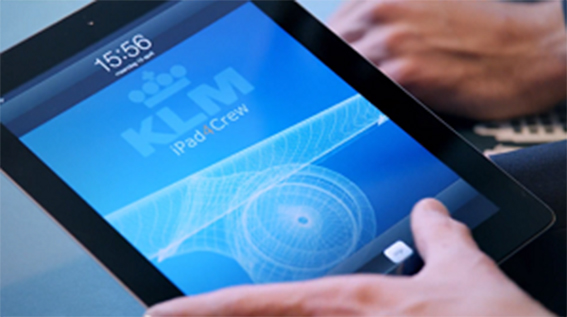 Tassos Georgiadis, Director Major Accounts of Teleena said, “We are proud to be working closely with the KLM team and to be part of this project. As innovation is in our DNA, we believe this agreement is a well-considered management decision. Teleena shall investigate and work closely with KLM on developing several other projects in the future to help maintain KLM’s competitive position. And in doing so also ensure a healthy and profitable balance between the companies’ interests keeping employees and customers loyal to the KLM brand.”