When it comes to a party, Mardi Gras in New Orleans can’t be beaten. 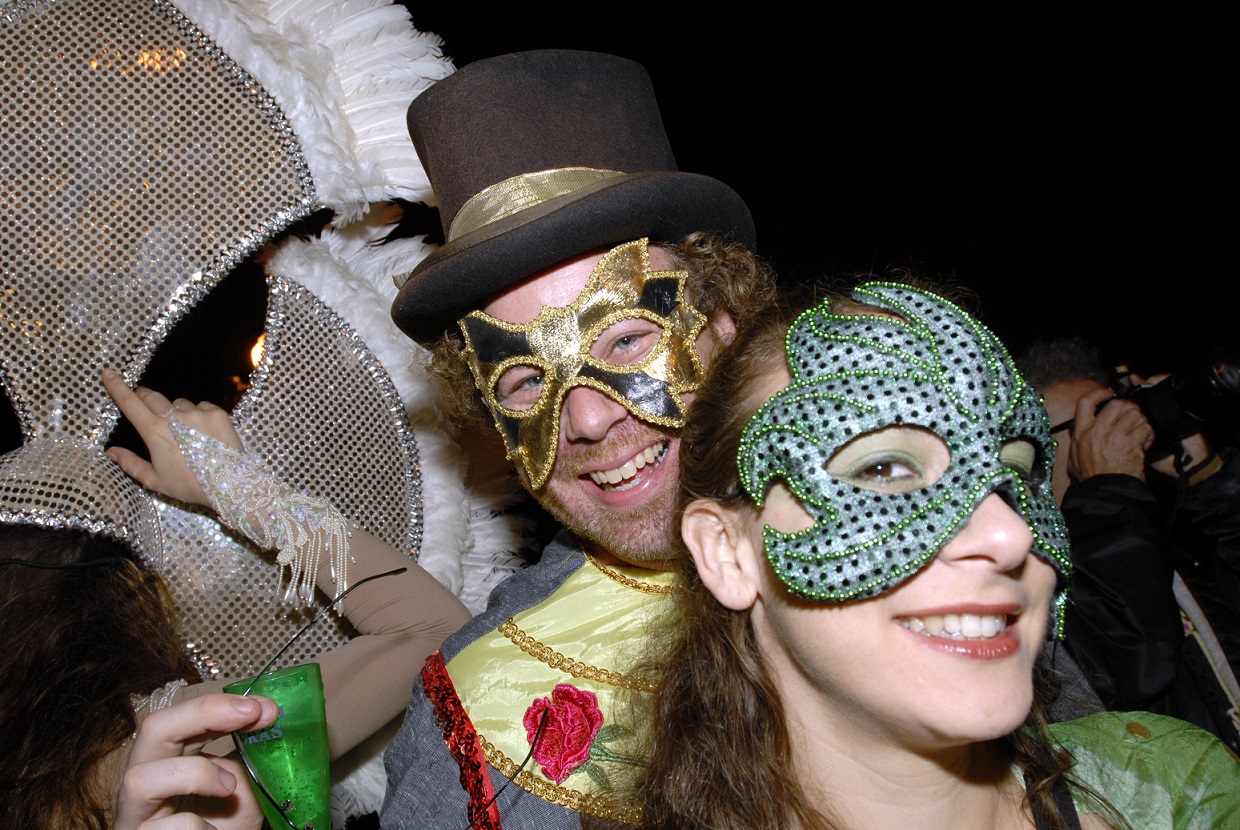 To New Orleanians, “Mardi Gras” specifically refers to the Tuesday before lent, the highlight of the season. The term is also be used less specifically the whole Carnival season, sometimes as “the Mardi Gras season”. “Fat Tuesday” or “Mardi Gras Day” always refers only to that specific day. It is jammed packed full of celebrations, carnivals, parades, masquerade balls, king cake parties and even debutante balls. There is usually a major parade each day with many days having several large parades particularly towards the end of the Carnival. 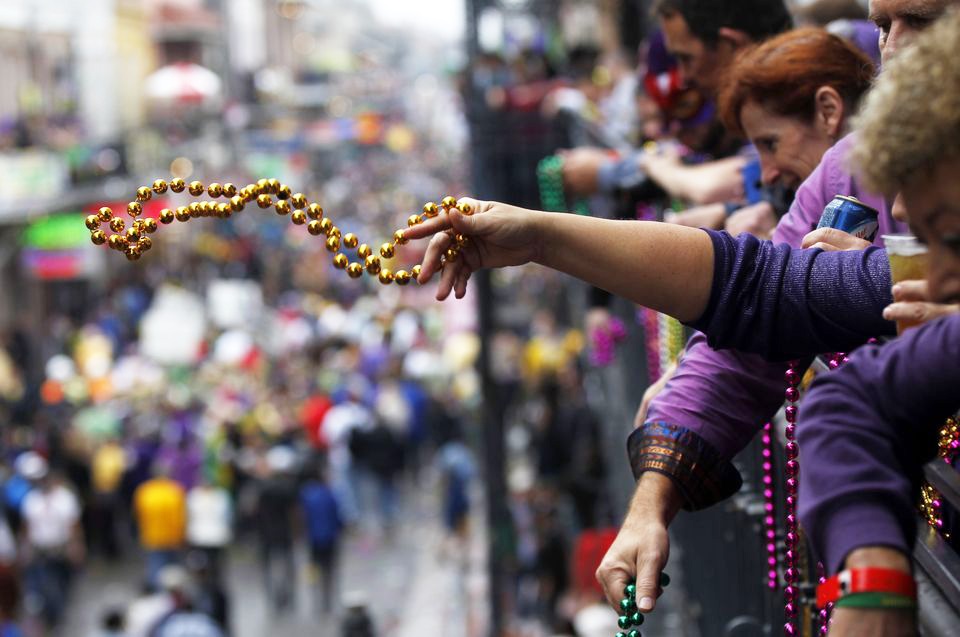 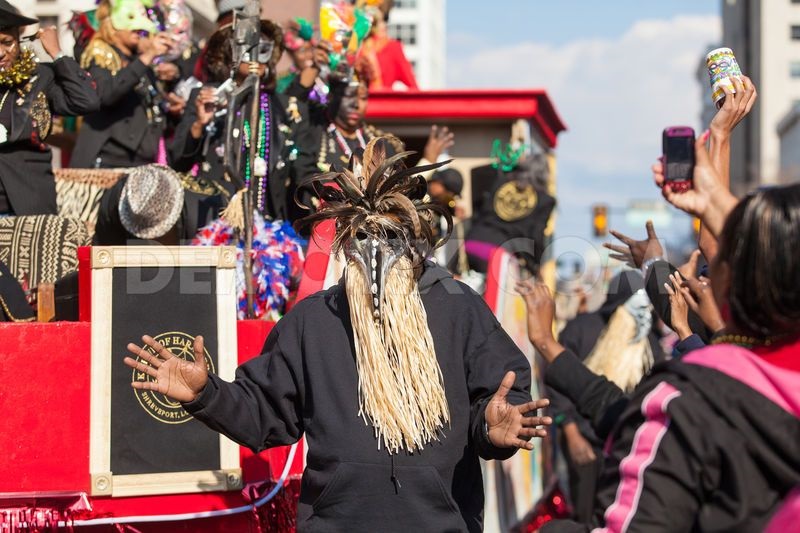 The event is one big holiday in New Orleans, all of the businesses and roads are practically shut down. It is full of music, parades, picnics, floats and excitement. Everyone is dressed up in costume, people wearing traditional purple, green and gold and all are adorned with long beads they have caught that are thrown from the passing floats.

The French Quarter is the main tourist area of New Orleans, but because of the narrow streets and overhead obstructions, most of the parades will not go into this area. Instead, major parades originate in the Uptown and Mid-City districts and follow a route along  St Charles Avenue and Canal Street, on the upriver side of the French Quarter. The whole city gets involved; it’s vibrant, bustling and lots of fun. 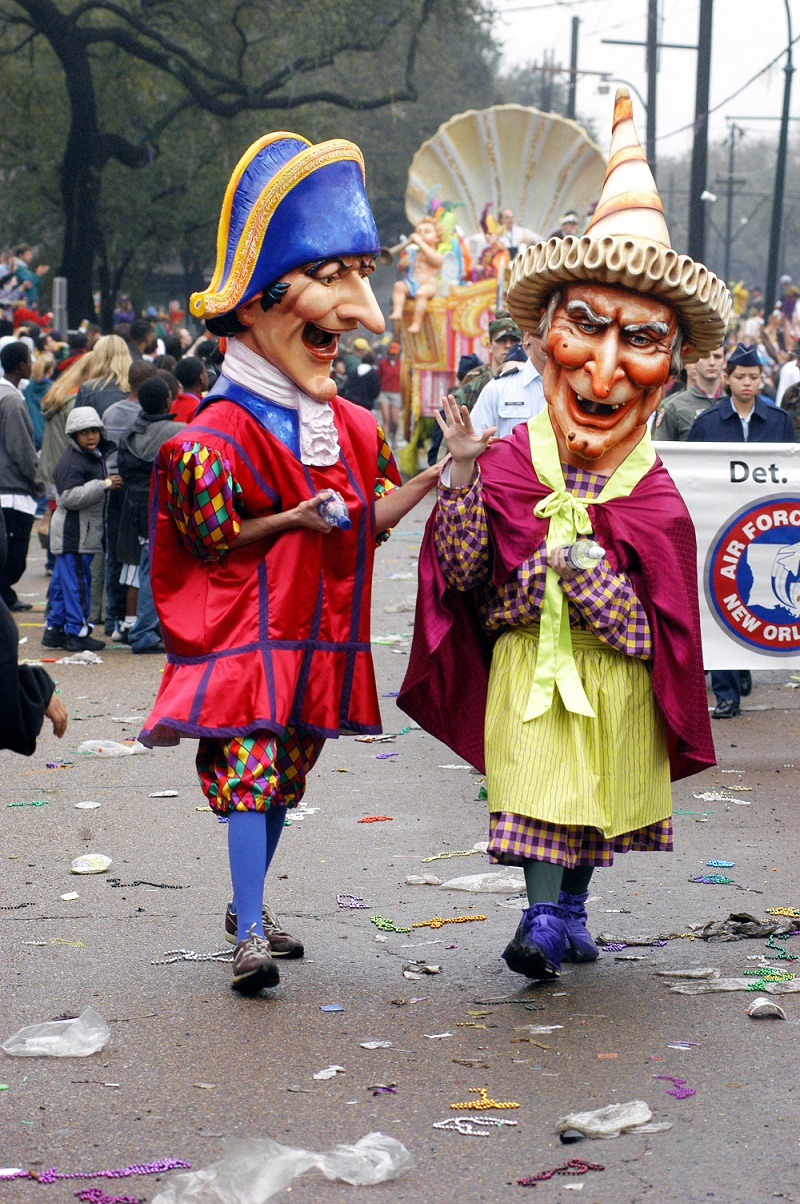 Attendance at some of the more aristocratic Balls is by invitation only. Originally, ball invitations were die-cut and printed in Paris; they continue to be quite colourful and valuable works of art. These invitations are also collector’s items, often framed for their beauty, and are interesting conversation pieces. Debutantes are introduced at Ball tableau as a formal introduction to society. Women dress in ball gowns and have a chance to dance with a ‘prince’ in formal attire – every girls dream! 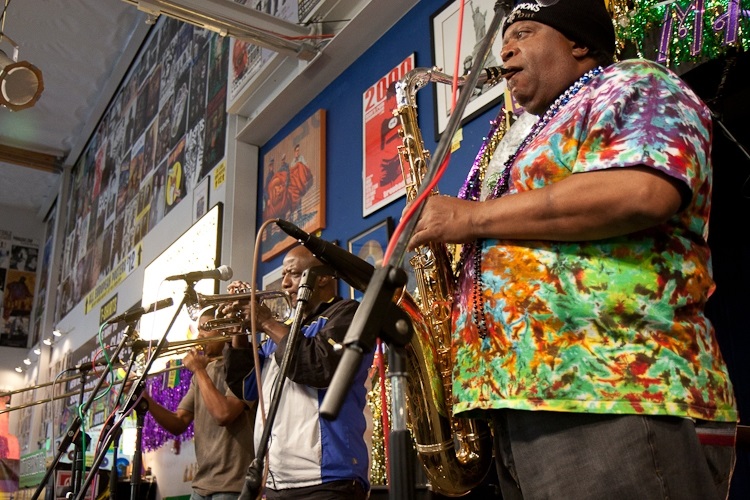 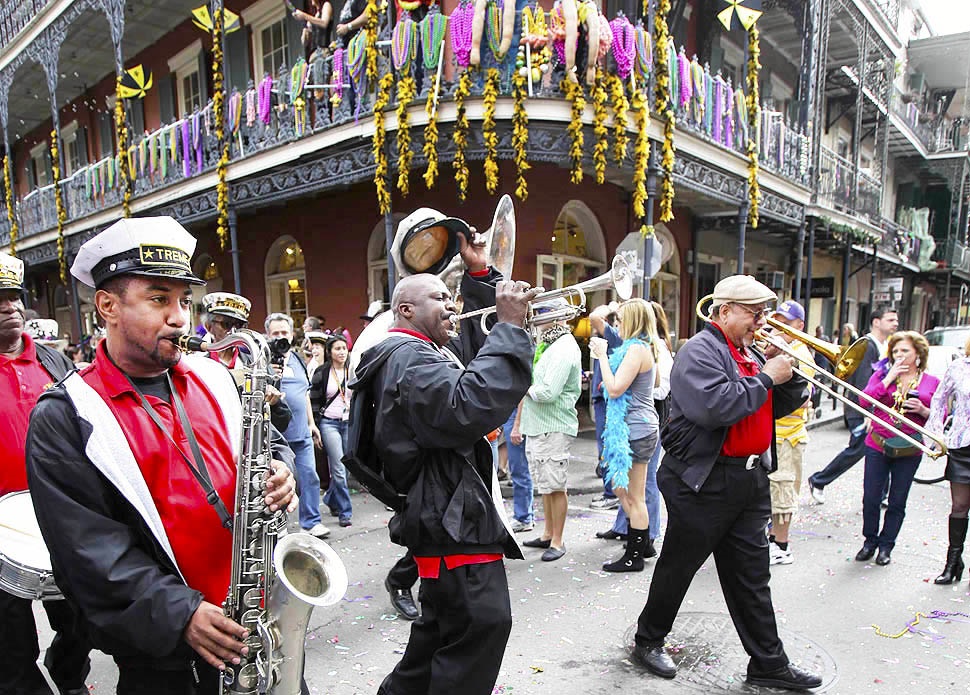 Some large parades also have an indoor extravaganza the night of their parade. This is a wonderful way to experience Mardi Gras! Everyone dresses formally, enjoys the parade, entertainment, and food all night long! 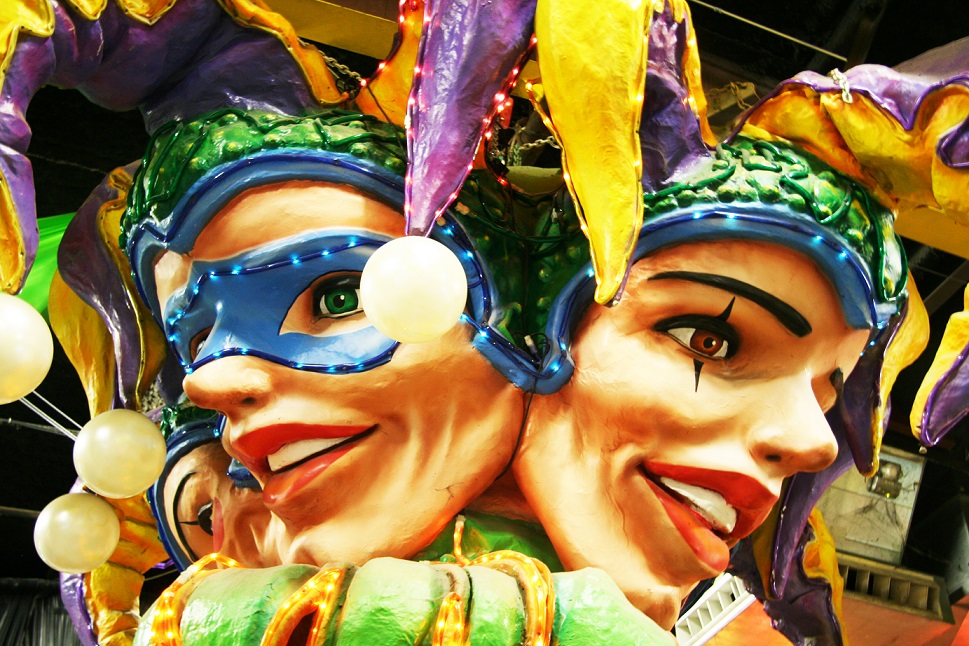 Bourbon Street is the main party street in the French Quarter. The long street is full of ‘hole in the wall’ bars and restaurants, there are souvenir shops by the dozen and everywhere you go you can hear music. Bars, clubs, restaurants all have bands playing, musicians just setup in the middle of the street and play, it’s a hub of activity and fun. During the Mardi Gras, there is much activity here that is frowned upon by the locals, they feel that it detracts from the real meaning of the festivities. There is a growing trend for tourists and some locals to ‘flash’ in an effort to catch more beads that are thrown from the balconies. This practice generally only happens in the French Quarter, particularly on Bourbon Street. It is frowned upon by the police and can often earn you a ‘ticket’ or an arrest. 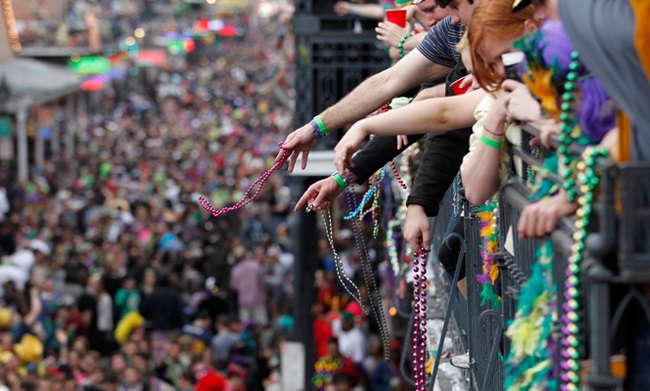 The beautiful balconies above Bourbon Street, are a wonderful place to enjoy the history, atmosphere, and culture of the Quarter as the sounds of jazz drift by after a fantastic meal. During Mardi Gras, many people think of them as a place to get away from the crowd surges below. Places on these balconies are sold off at a premium price during Mardi Gras, for the incredible view, a way to beat the crowd and the chance to throw your beads down to passers-by. 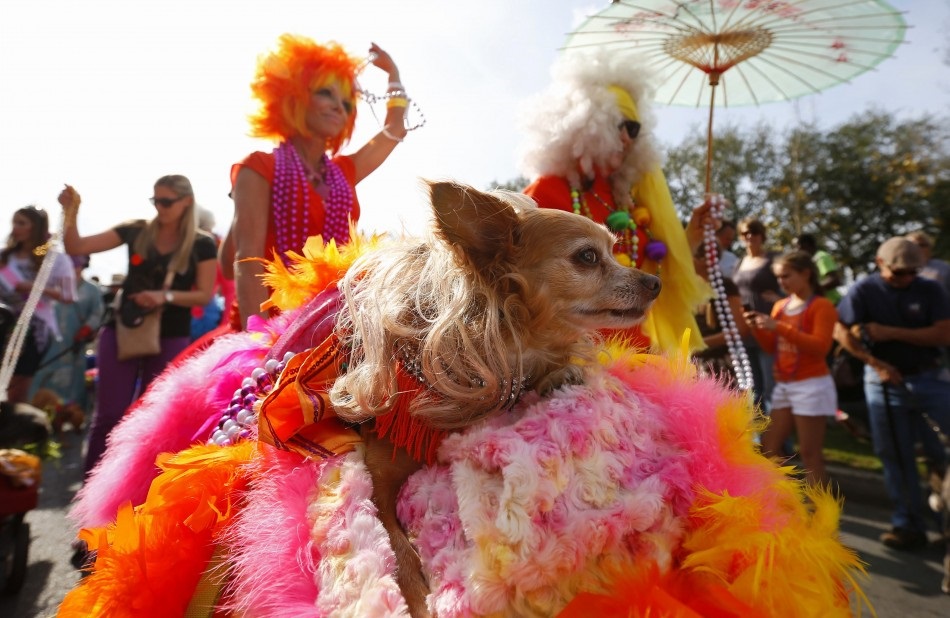 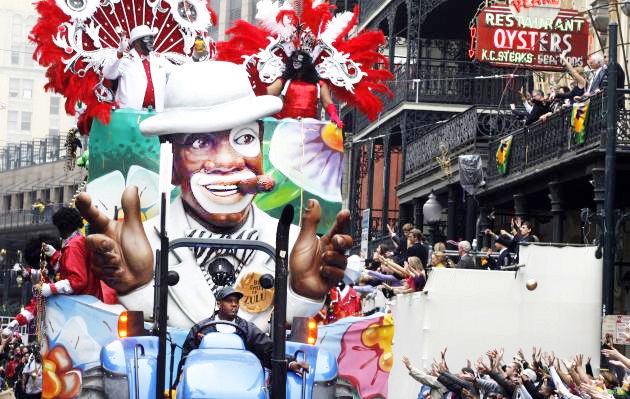 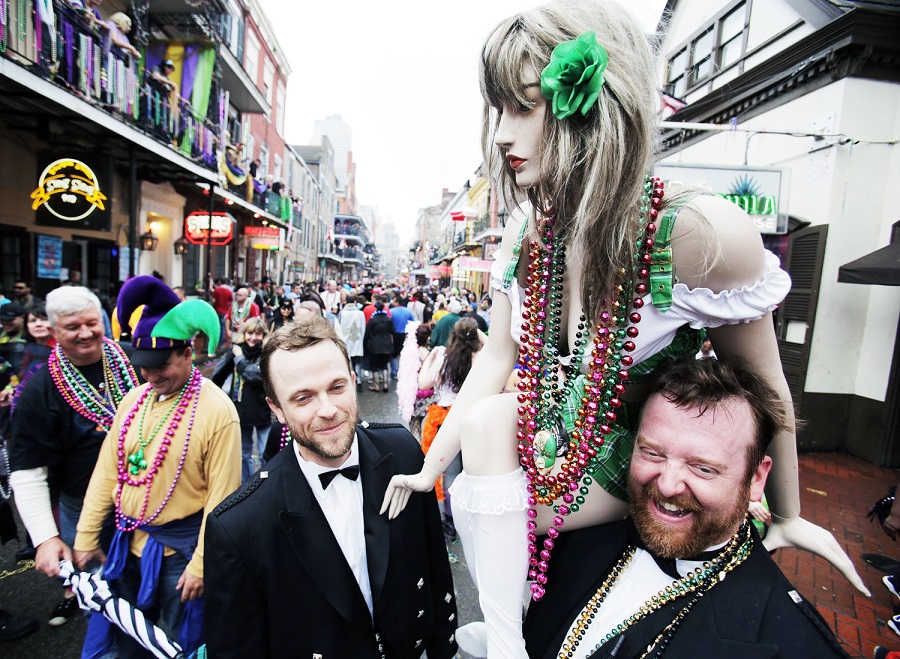 Of course, New Orleans has much more to offer than Mardi Gras. It is a city steeped in history and tradition, you simply have to look at the architecture and make a visit to the famous cemeteries to see this. Ride a paddle steamer down the Mississippi and eat the traditional cuisine of red beans, crawfish, creole, alligator and the like. Restaurants have oyster bars where you can dine on the very best of oysters the world has on offer. Take a trip out to one of the plantation houses, go in search of alligators, listen to the diverse music that flows through the city or catch a game at the very impressive Super-Bowl.

If you are lucky enough to be in New Orleans during Mardi Gras, you are set to take in what is called the ‘Greatest Free Show on Earth’, if you are there for Fat Tuesday, you will be there for what is known as the ‘Biggest Party in the USA’.

Planning a trip to Mardi Gras in 2018? Start planning – February 13 will be here before you know it.