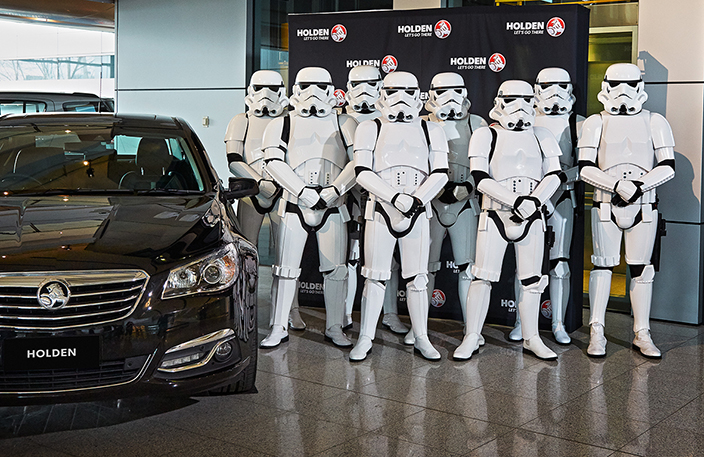 Melbourne, Australia: Holden announces a multi-year agreement with The Walt Disney Company Australia and New Zealand to promote the Star Wars franchise, one of the largest entertainment properties in the world.

Agreement announced as excitement builds ahead of the release of the next instalment in the franchise, Star Wars: The Force Awakens.

The relationship comes as trailers of the new movie Star Wars: The Force Awakens – have caused global anticipation with over 88 million views in a 24 hour period.

Holden’s Executive Director of Marketing and Customer Experience, Geraldine Davys, said the announcement was an exciting collaboration that presented unlimited opportunities and potential.

This is an exciting and important step for Holden as we continue to evolve our brand and reach out to new customers,” Ms Davys said.

This agreement enables Holden a connection to one of the biggest and most loyal followings in the world, over 500 million fans globally, and allows us to think outside the box as we continue to capture the imagination of our customers.

We’ll have a number of innovative and engaging activations coming to Australia and New Zealand and our customer should be prepared to expect the unexpected.”

Kylie Watson-Wheeler, General Manager Disney Consumer Products and Retail, said “Star Wars is a property like no other, with a unique universe of characters and stories that has inspired a passionate and multi-generational fan base around the world.”

The Walt Disney Company Australia and New Zealand is thrilled to join forces with Holden to celebrate the mythology surrounding the latest chapter of the Star Wars saga,” said Ms Watson-Wheeler.

Disney and Holden share a long-term bond with Australian and Kiwi families along with a heritage of trust, innovation and excellence.”