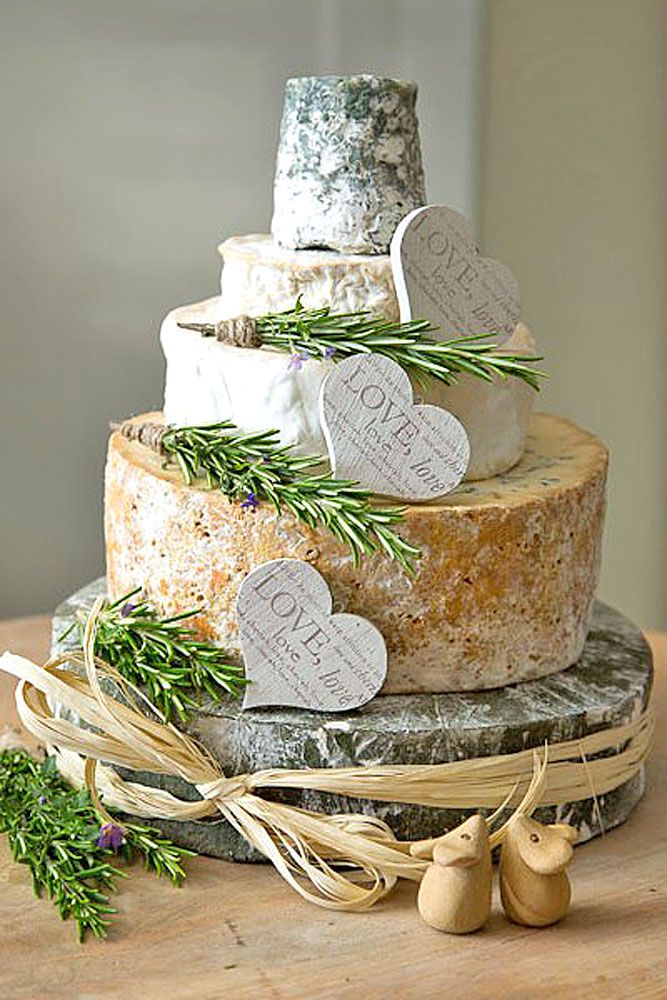 It is a huge honour to be trusted with the task of putting together something so special for this soon to be wed couple; I want to give them everything and make it super special, something they will remember forever.

‘Nothing but the best’ I thought as I headed to the far outer eastern suburbs of Melbourne to do a taste test at a French Fromagerie. I live not too far from here and the wedding will also be held in the same area so, to me, it made perfect sense to keep everything as local as possible. 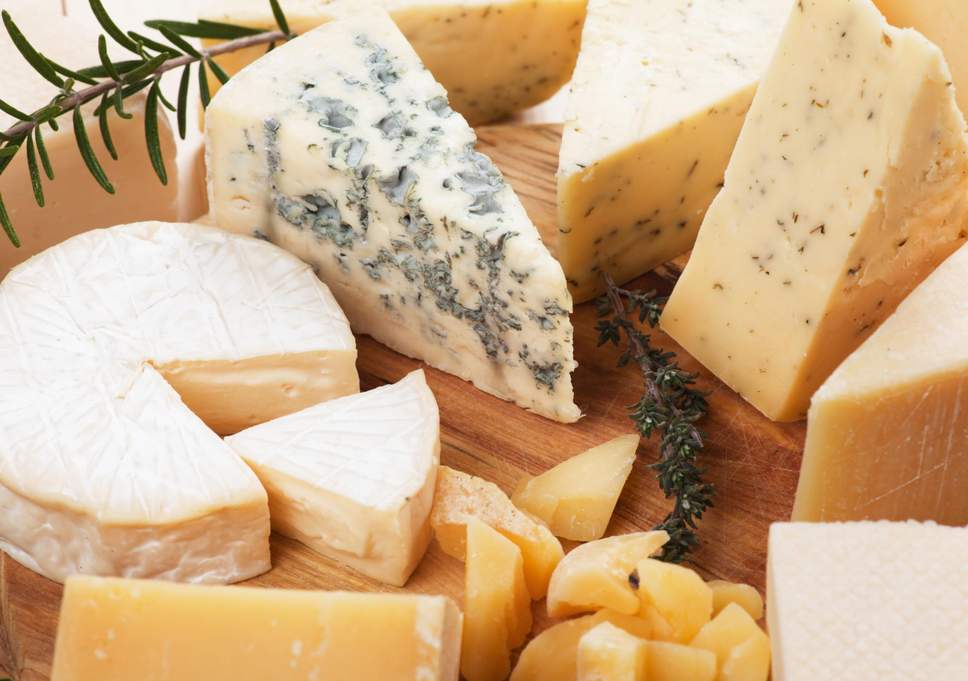 The woman at the store who served me was happy to give me tastings of cheeses, though she wasn’t overly forthright with any suggestions. Obviously I wanted the cheeses to taste good, but they also had to look good, and they had to be in sizes that would stack up like layers in a traditional flour and egg cake.

I have to say, all cheeses, but for one, were absolutely divine, taste wise it was going to be very easy to choose a variety. I made my selection of four which the woman advised me is ‘perfect’ for a cheese wheel cake. Even though, the ‘artiste’ in me would never settle on an even number for any type of decoration I was guided by her and her ‘experience’. When I asked about prices she seemed quite vague and evasive, saying that ‘the boss’ would be able to get me much better prices as I was purchasing the whole wheel of cheese rather than just a wedge. She would send an email to the boss, cc’ing me, so that the boss could give me a proper quote. 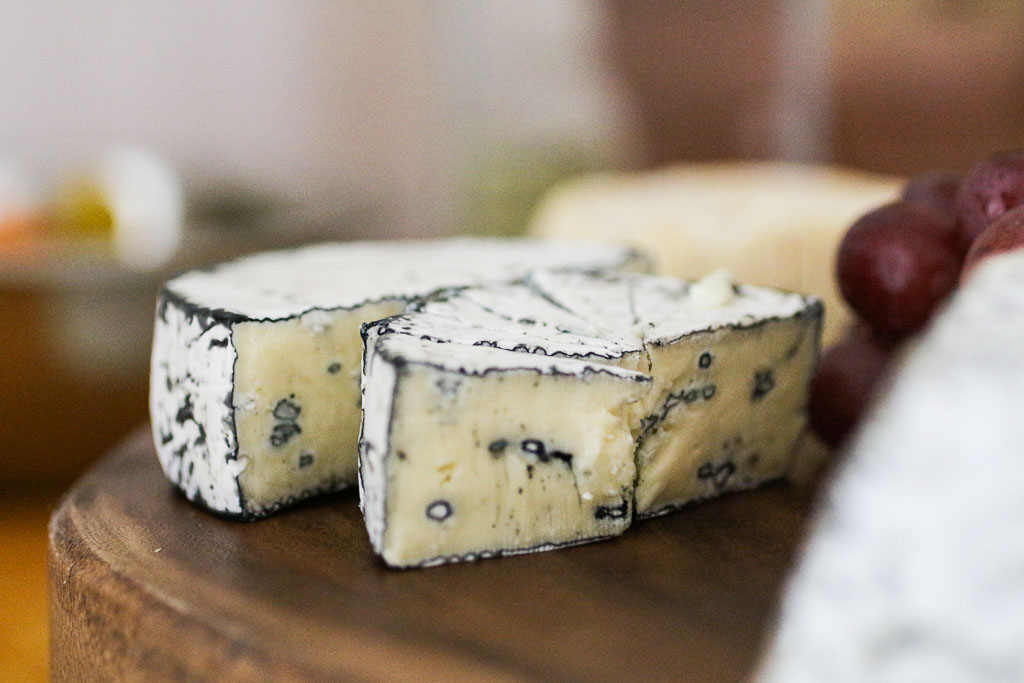 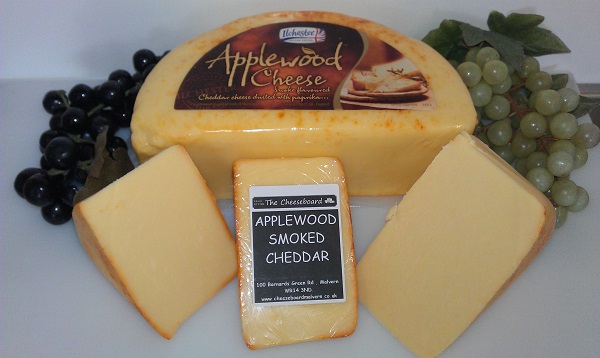 When that quote came through I nearly fell off my chair – one of those wheels of cheese alone was $800! Ok, that cheese was damned good, but $800 for one wheel and I was getting four wheels…

Emails passed between ‘the boss’ and myself and it was decided that I would go back to the store at a time when she was in and go through some other options.

I headed back there at the date and time arranged. ‘The boss’ barely acknowledged my presence when I introduced myself, she held up a couple of cheeses said that ‘these will do’ and that I would be very happy with them. I was offered no taste testing and my query about having a soft cheese as the bottom tier of a four tier ‘cake’ might not be a great idea was brushed aside as if I was some kind of idiot. I walked away with the new quote and decided there and then that I would not go back – I was going to take my business elsewhere – but where?

Before I had decided to ‘keep everything local’, I had planned on going to Queen Victoria Market (QVM) in Melbourne to get cheeses. My massive hate of crowds put me off and it was one of the contributing factors for me heading to the far eastern suburbs of Melbourne.

I was gently coerced into making the effort and travelling in to QVM – best decision I have ever made! 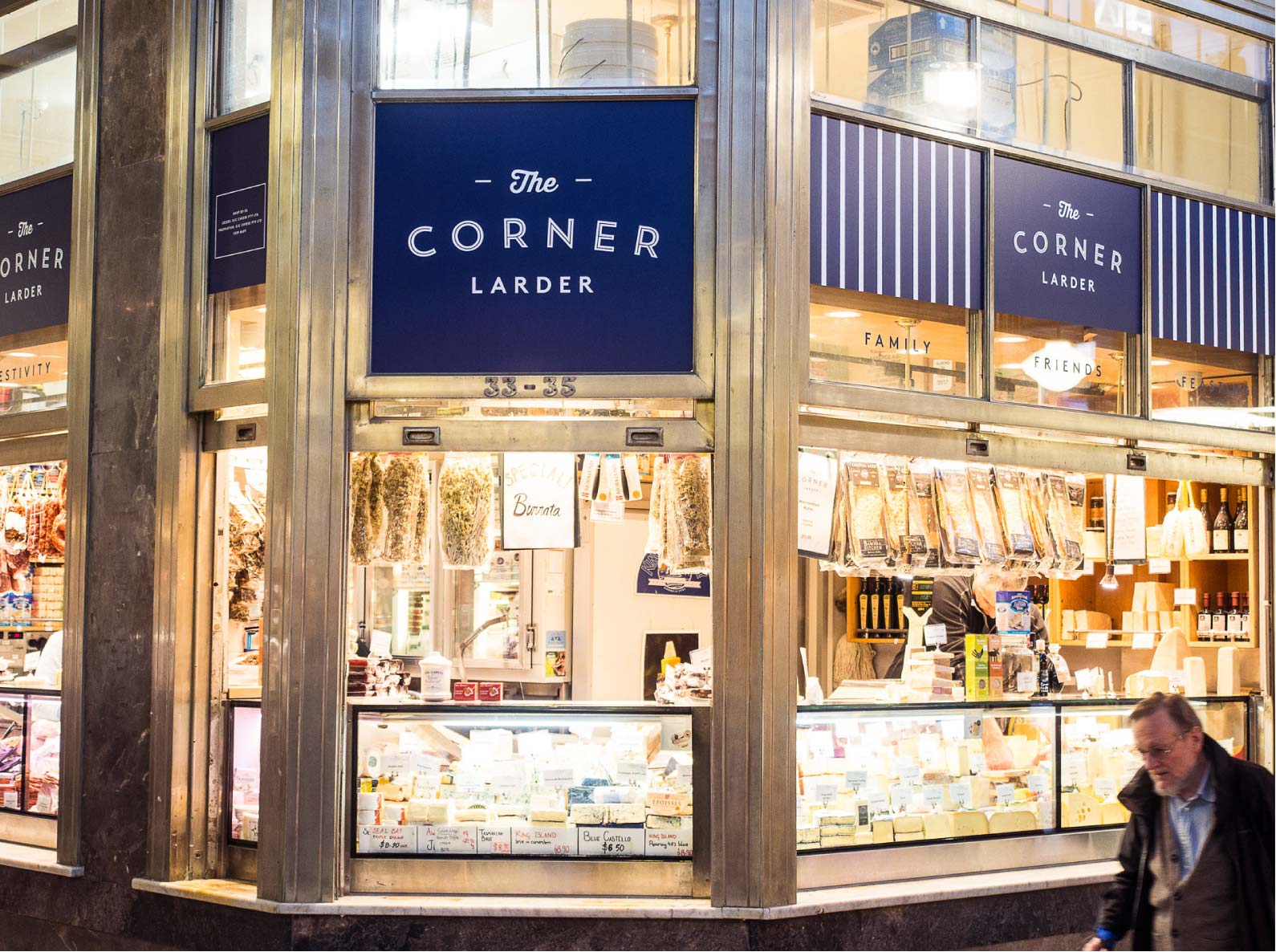 It was here that we discovered The Corner Larder and Kevin Teather. WOW what a huge difference in customer service, knowledge and variety. 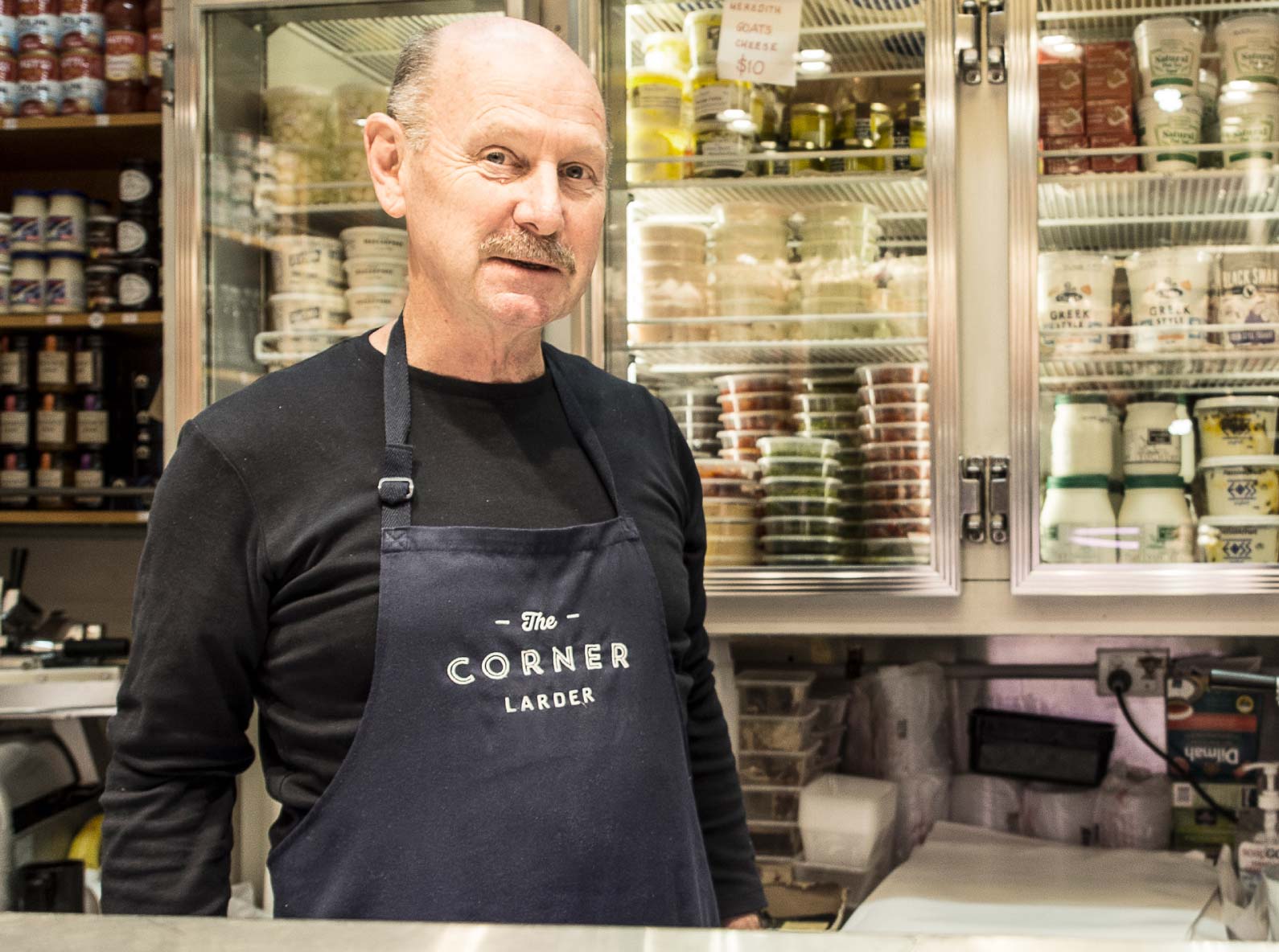 Nothing was too difficult for Kevin. He was happy to let us taste as many cheeses as we liked (and there were hundreds available). He offered advice on which flavours would go well with others, he was happy to stack the different wheels of cheese on top of each other so that we had a ‘visual’ and helped us choose five tiers – which he thought looked better too! He wasn’t at all fazed when I said that I wasn’t a fan of the ‘look’ of one of the cheeses as I felt it sat too high compared with the others. He happily found other cheeses for us to taste and try for appearance. And, surprise surprise, he suggested a harder cheese, a cheddar, to be the bottom layer! Who would have thought a harder cheese would hold up better under the weight of other cheeses! 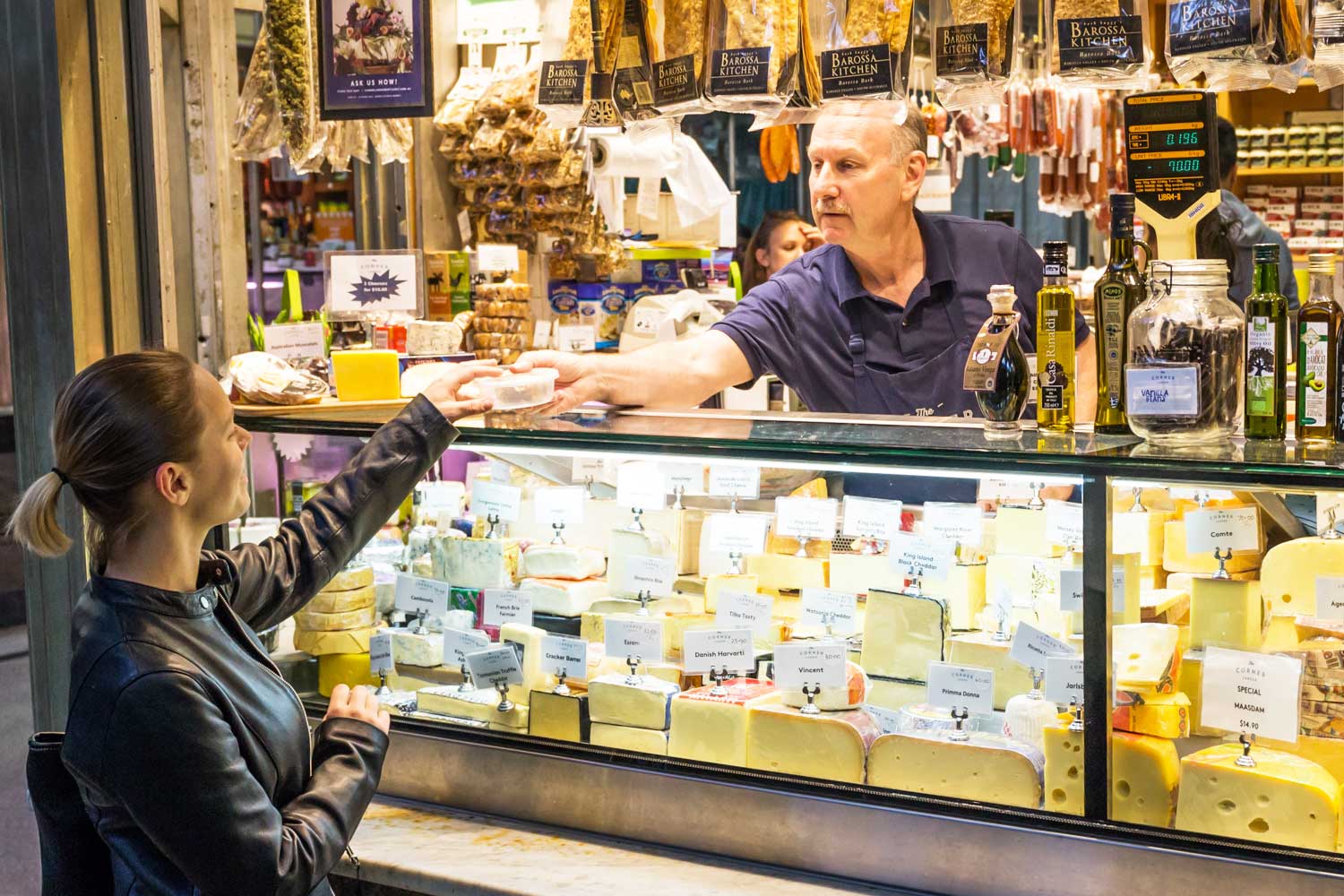 Kevin provided us with wonderful service and advice, PLUS, he gave us his personal mobile number in case we had any questions or needed to change anything.

I won’t say what this cheese is going to cost me, but I will say that I am VERY happy. Every type of cheese in this ‘cake’ is delicious, it is Australian, and it is going to look spectacular on the day.

Want delicious cheese in Melbourne? I have no hesitation in saying you MUST get to QVM – The Corner Larder.