Melbourne, Australia: I had heard of Chapel Street’s Kin restaurant but so far hadn’t found the time to venture there to give it a try. So, I was quite excited when I was invited to go to Kin’s newly opened sister restaurant – West of Kin.

For me, someone who lives in the outer eastern suburbs of Melbourne, heading to West of Kin was more of a trek than a drive and if I hadn’t been going to review what I was expecting to be great food, I probably would have had to think about packing a picnic lunch for the journey.

West of Kin is in Braybrook, in Melbourne’s Western suburbs, approximately 11km from the GPO. Though relatively short in distance, travelling to Braybrook from the heart of Melbourne can often take a very long time due to the usually heavy traffic. 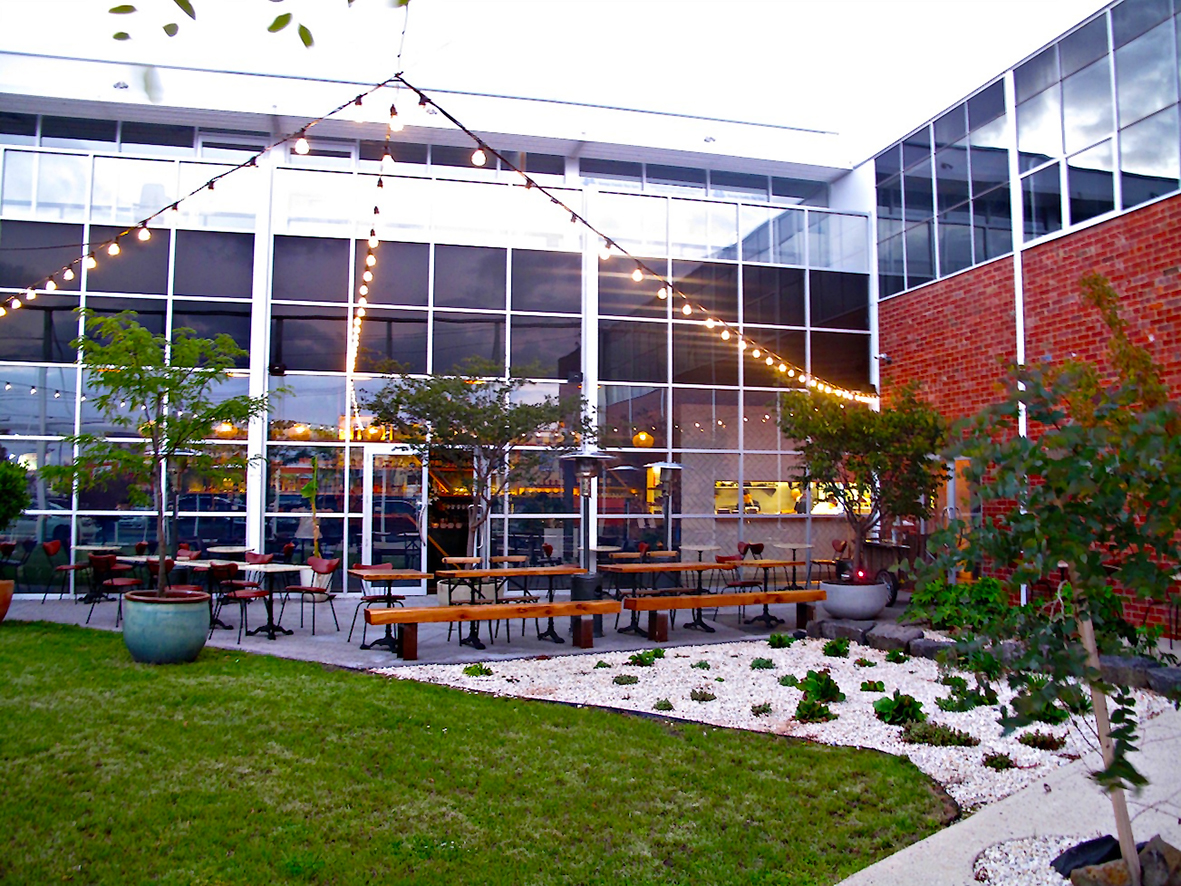 Located at 17 Lacy Street, Braybrook, this restaurant can be a bit difficult to find as it is nestled in a heritage building and therefore not allowed external signage. The premises is right on the corner of Lacey Street and Ballarat Road and set back behind a beautiful grassed courtyard. Inside, the décor has kept true to the heritage building in which it is situated, with its industrial theme featuring exposed red brickwork and lots of hanging globe lighting. There are timber tables and chairs, and surprisingly, booths – who doesn’t like sitting in a booth, especially when the seating is so comfortable.

Owners of both restaurants Andy and Tram Tran say they’re excited to break into the relatively untouched Western suburbs, where they believe a lack of restaurants will make West of Kin popular.

“Suburbs such as Prahran, Brunswick and Fitzroy are very densely populated with little cafes, great for weekend brunches and for takeaway coffees and lunches during the week. However, there aren’t many options available at the moment in the Western suburbs, which is what attracted us to the location,” said Tram Tran.

While Kin offers traditional Vietnamese fare, West of Kin offers Asian fusion. The menu has been developed by consulting chef Sam Pinzone, who has earned his stripes from his time working under Neil Perry at Rockpool, Jacques Reymond and most recently as executive chef at the refurbished The Rose Upstairs in Fitzroy.

While the menu is quite small, the variety of food offered will leave you feeling very satisfied. 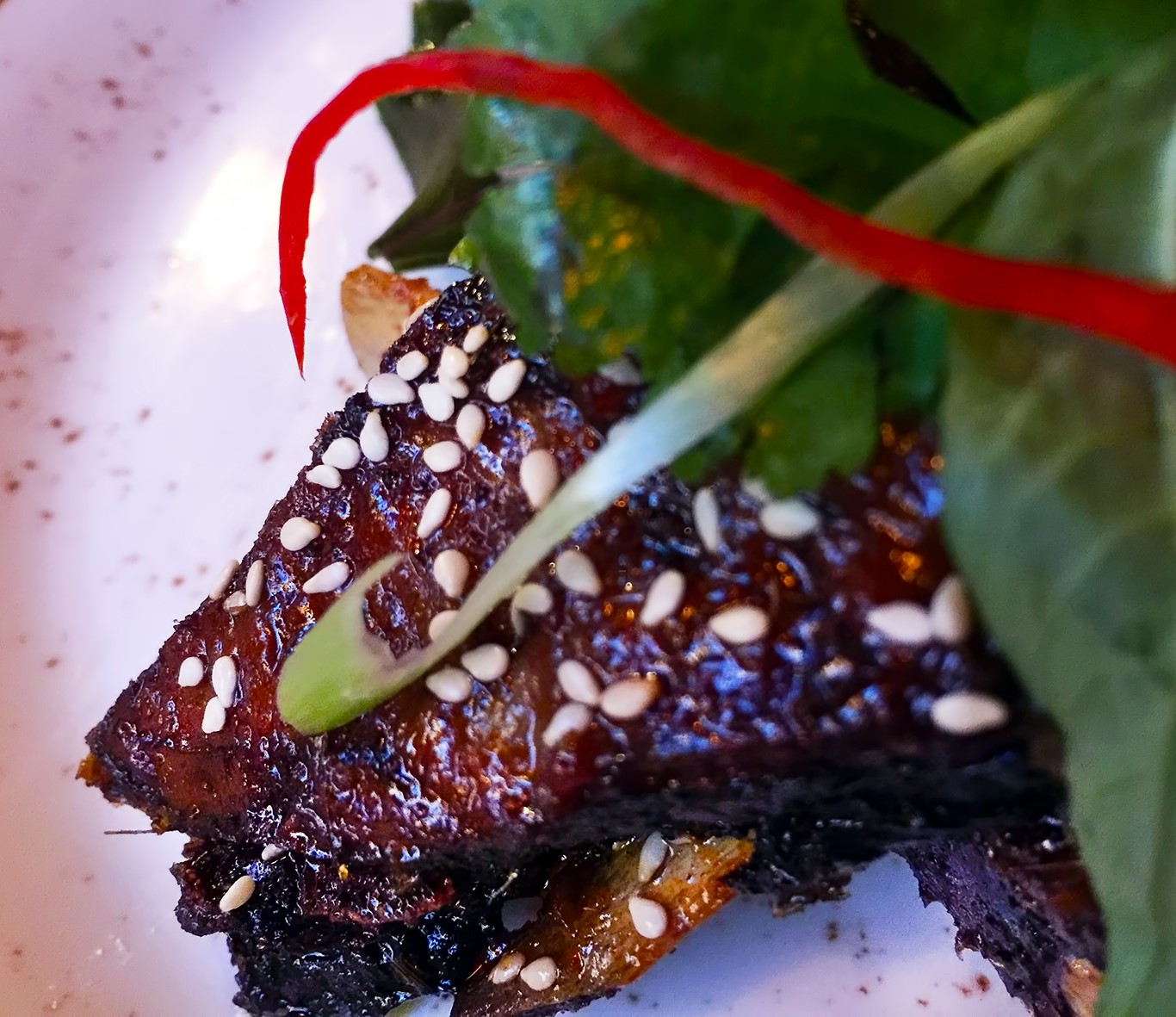 I recommend you try a few small taste dishes followed by a shared main then dessert, so that you can experience West of Kin in its entirety.

I let the waiter choose the dishes my dining partner and I would be eat for the evening.

We started with a variety of share plates. The prawn toasts were not like any prawn toast I had tasted before – there was NO oily taste! This is a huge bonus as I am always put off these greasy morsels that I have been served many times before. These were light, full of flavor and delicately topped with black and white sesame seeds. 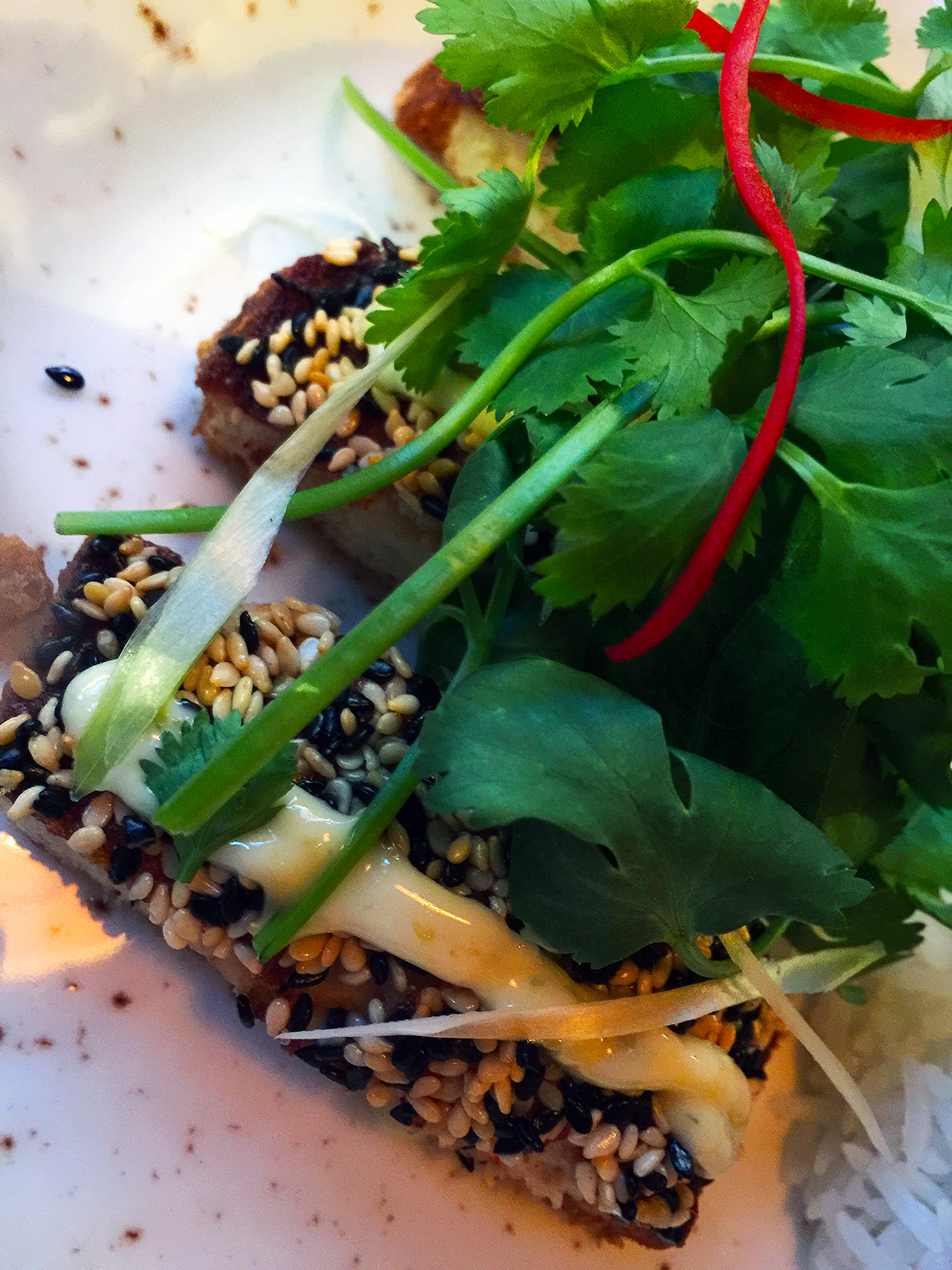 The son in law egg, served with kim chi mayonnaise, had been lightly fried in a very fine Vietnamese crumb which was crispy and delicious. The egg, when broken, oozed gooey yolk that slowly poured out over the rice on which it was served.

I’m salivating as I think about the delightful lamb ribs that were sticky, spicy and extremely tender – fall off the bone tender, these were so good, I could have easily had a second serve (by myself). 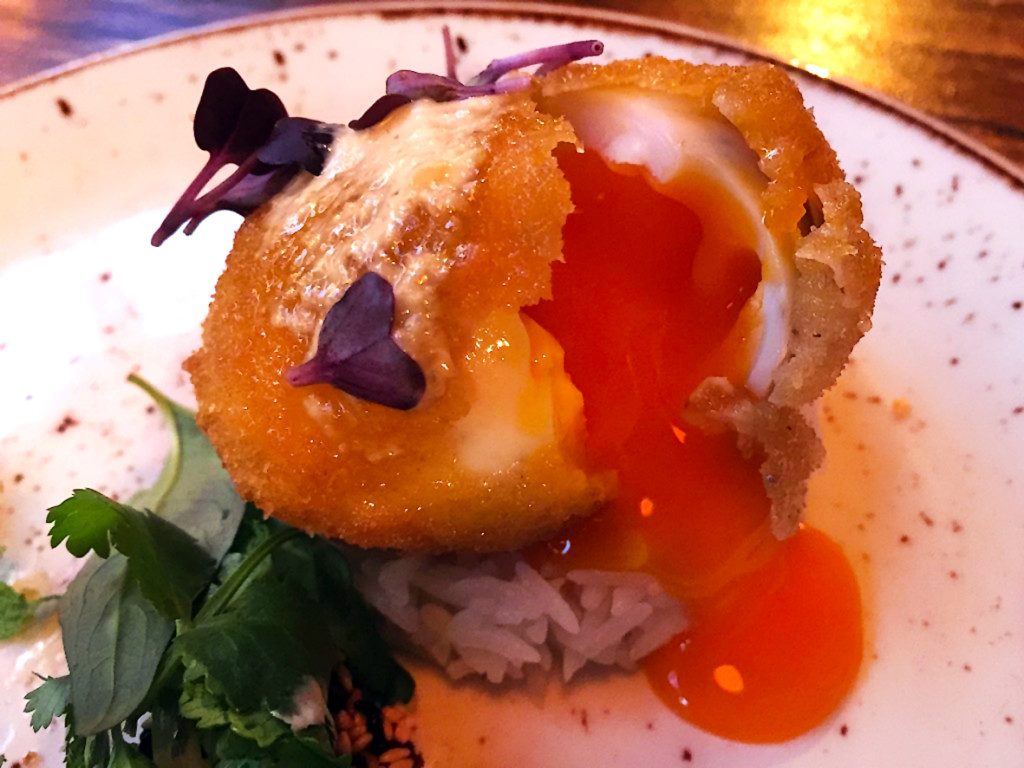 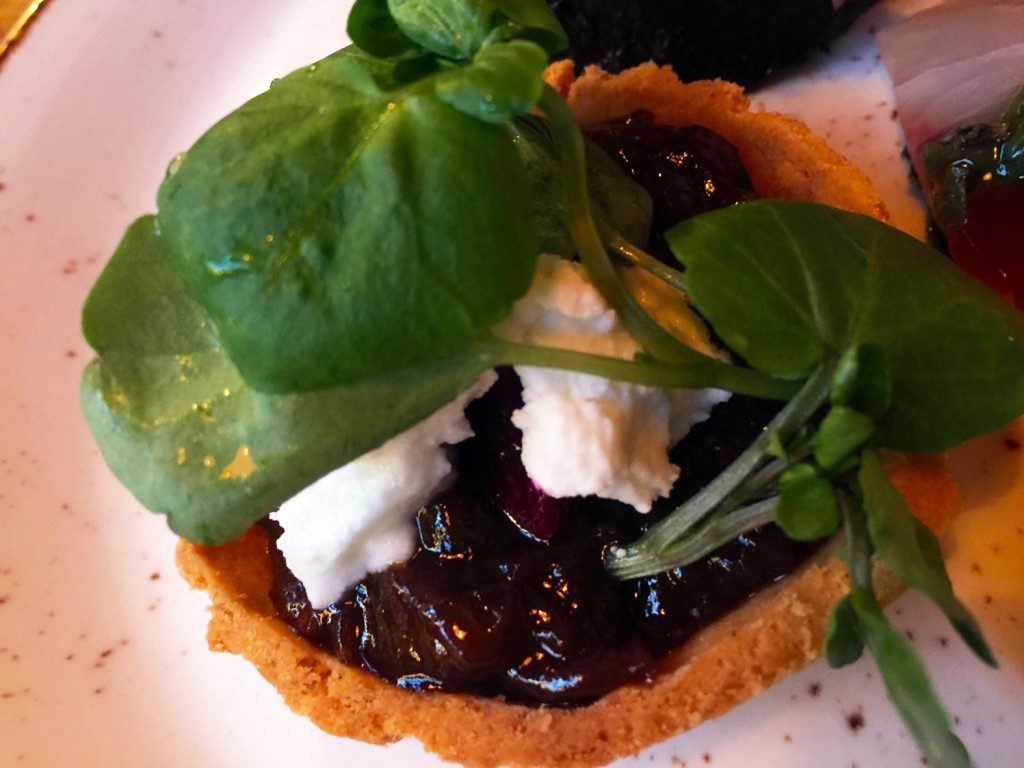 Also on the share plates was a beetroot and goats cheese tart – extremely ‘fusion’, and extremely delicious. Crispy thin pastry was packed with a tasty and rich mix of beetroot and onion that had been cooked to a jam consistency then topped with watercress and smooth goat’s cheese.

We were also served kelp cured kingfish which was finely sliced and full of flavor. The fish was served at room temperature, which sort of threw me a little bit as I am used to eating ‘raw’ fish cold; still, it was absolutely delicious.

Our main course, again the choice was left up to our waiter, was ma po tofu pork and black bean, and master stock shredded duck, egg noodle, xo sauce, spring onion, coriander, chili, with fried quail eggs served with steamed rice. These dishes were both presented beautifully; it was difficult to start serving the food as they looked too pretty to dig into. 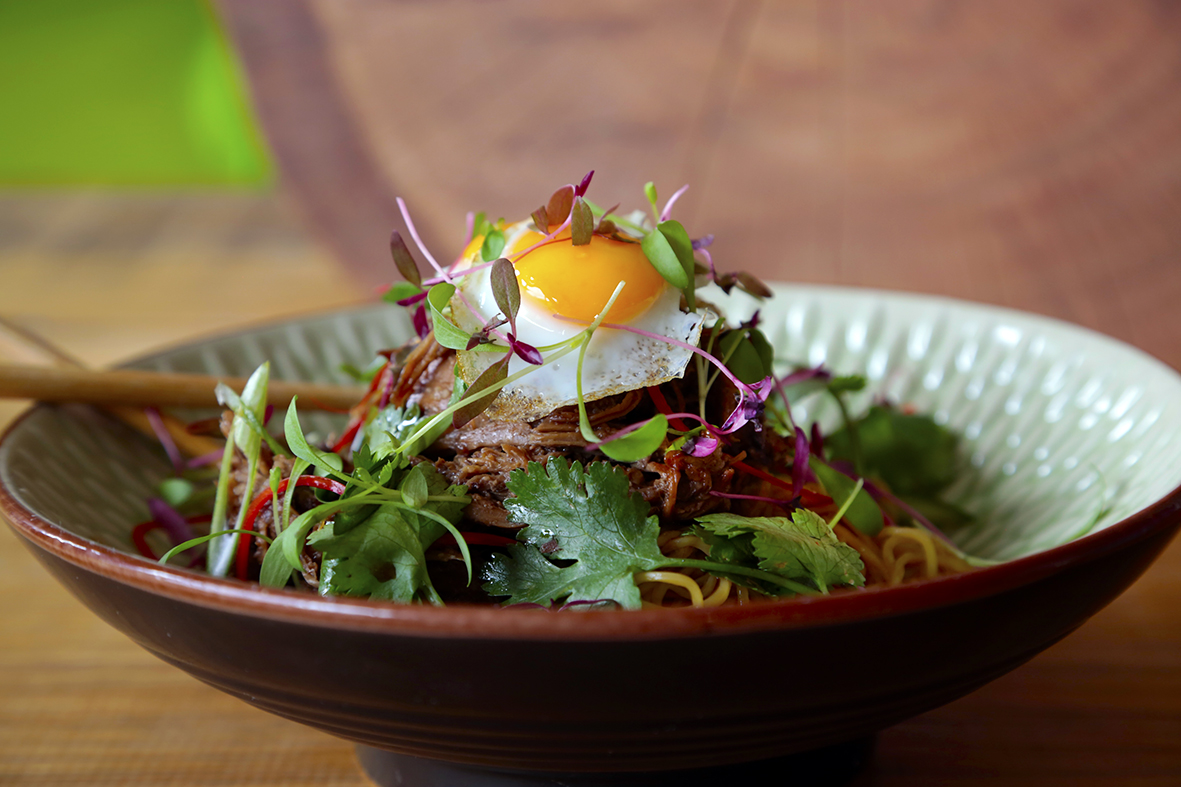 I have often heard that silken tofu is an acquired taste, but I tend to think it is more about the texture than the flavor that can put people off it. When served in this dish of spicy pork mince and herbs such as coriander and mint, the tofu absorbs the other delicious flavors and the texture adds a layer of silkiness that allows those flavors to carry further onto your palate.

I have never been a huge fan of duck, but the duck and noodle dish was very moreish. There was no overpowering flavor that I often find from this bird, it was delicate, but at the same time full of flavor and spice. Perfectly shredded, the duck was served with noodles, cucumber, coriander, mint and quail eggs and I kept going back and serving more and more.

By this time we were both overfull and decided against a dessert, but our very persuasive waiter soon had us tasting the spiced panna cotta – I’m very glad he did! This silky smooth dessert was served with tiny cubes of scorched fruit and saffron syrup and was delicate in its spiced flavors. 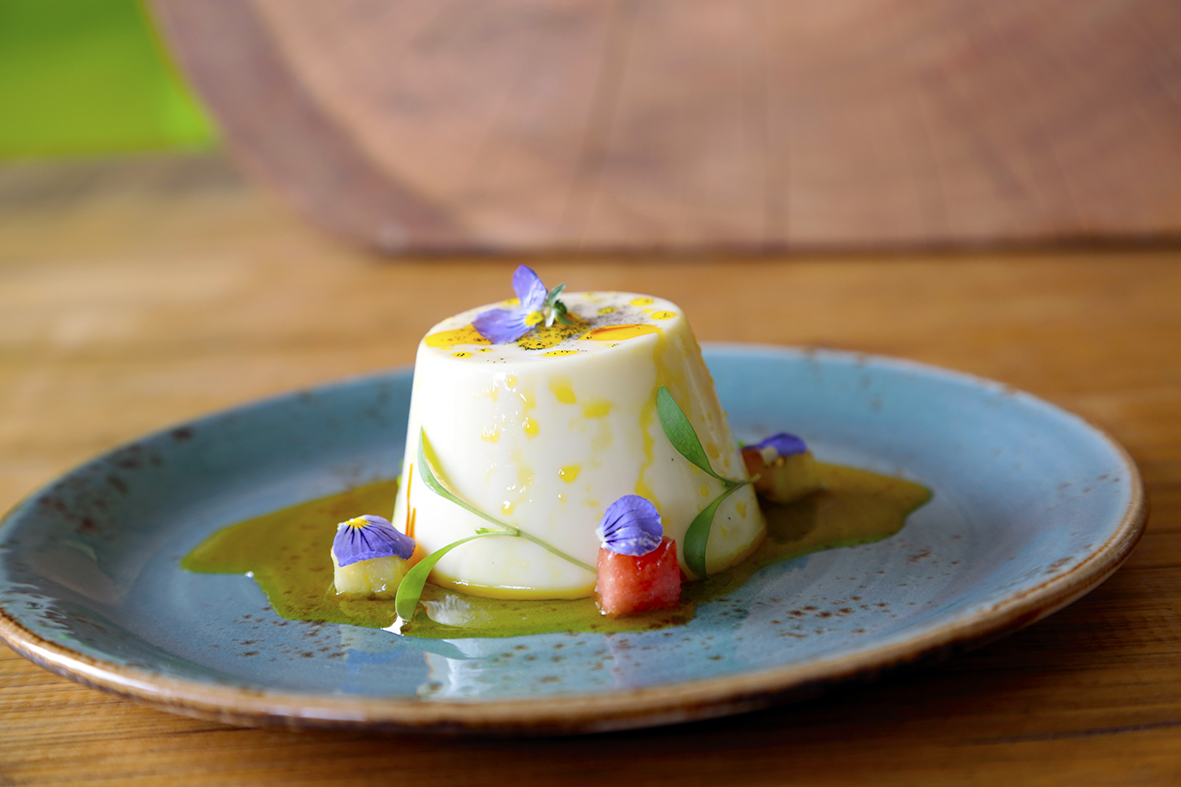 West of Kin is a great little restaurant and foodies in the western suburbs of Melbourne should rejoice that their ‘food scene’ is improving with quality restaurants like this. Though very newly opened, the word about the great service and food is already getting out with the restaurant doing a great trade when we visited mid-week.

At the moment, West of Kin is open only for dinner, but the plan is to be open for lunch and breakfast in the very near future.

Was it worth more than an hour’s drive to get there? You bet it was!