In the elite men’s, race a large pack exited the water together including Maloy, Matthew Roberts, Clayton Fettell, Ryan Fisher and Jake Birtwhistle.

Out on the bike course, the top contenders stayed within sight of each other until Maloy, the 2014 Elite National USA Champion, made his move at approximately the 13km mark.

“I was with the top group in the swim and had a pretty good transition and once I hit Noosa Garmin Hill I felt pretty good, it wasn’t my strategy but I just rolled with it and drilled it up the hill,” said Maloy. 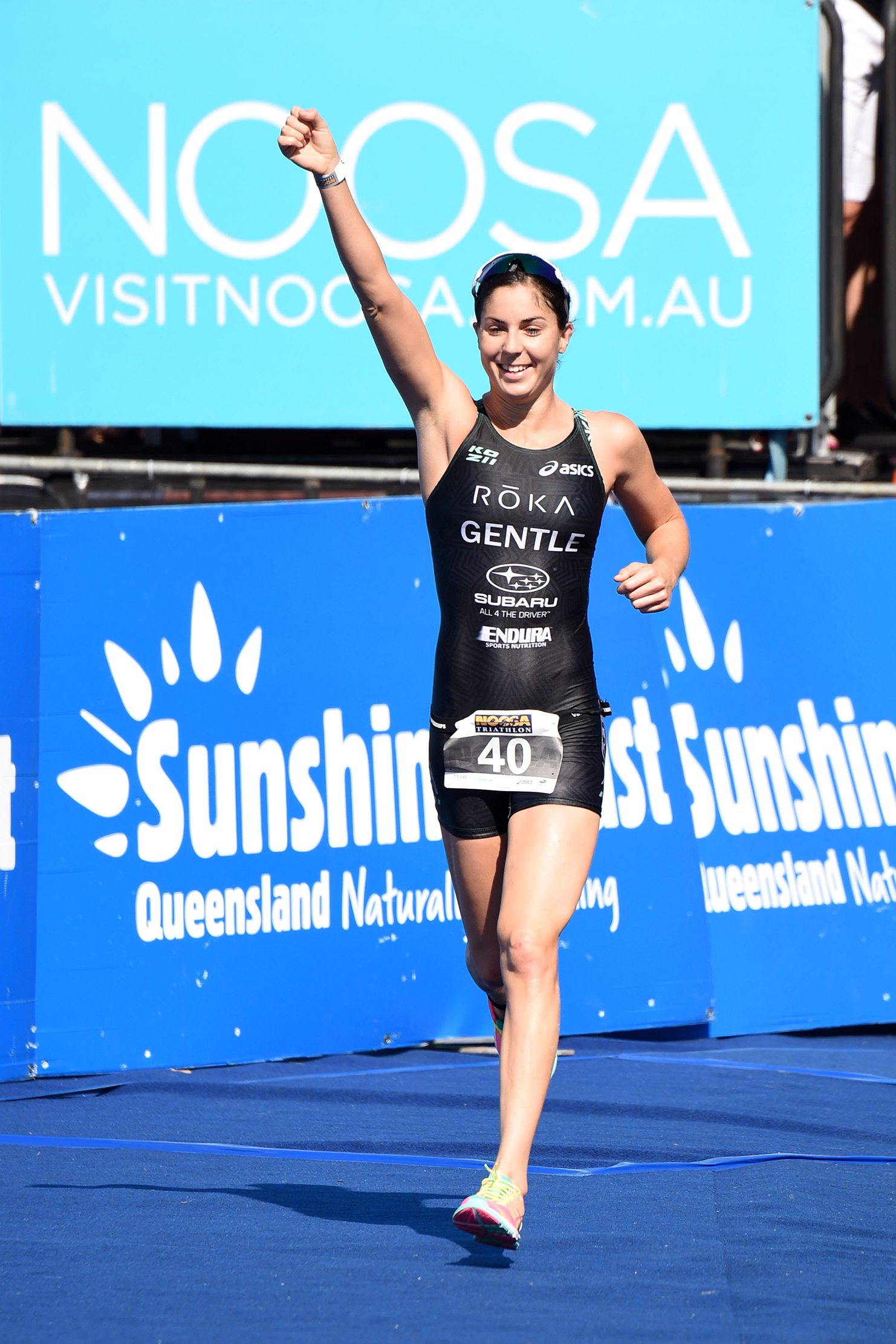 Once he had a gap Maloy put the hammer down in a bid to put some time between himself and Birtwhistle and Fisher.

“I figured with a group of Australians, the guy in the stars and stripes is going to get the drafting penalty. I took my chances going off the front and I put in enough of a gap to hold it off and I am thrilled,” the polished Maloy said.

Queensland’s Fisher and IRONMAN 70.3 specialist, Fettell, were unable to bridge the gap to Maloy , who entered T2 with a lead of more than a minute.

Concerned about the faster runners in the field Maloy, went hard early in a bid to break the spirit of the chasing Aussies. 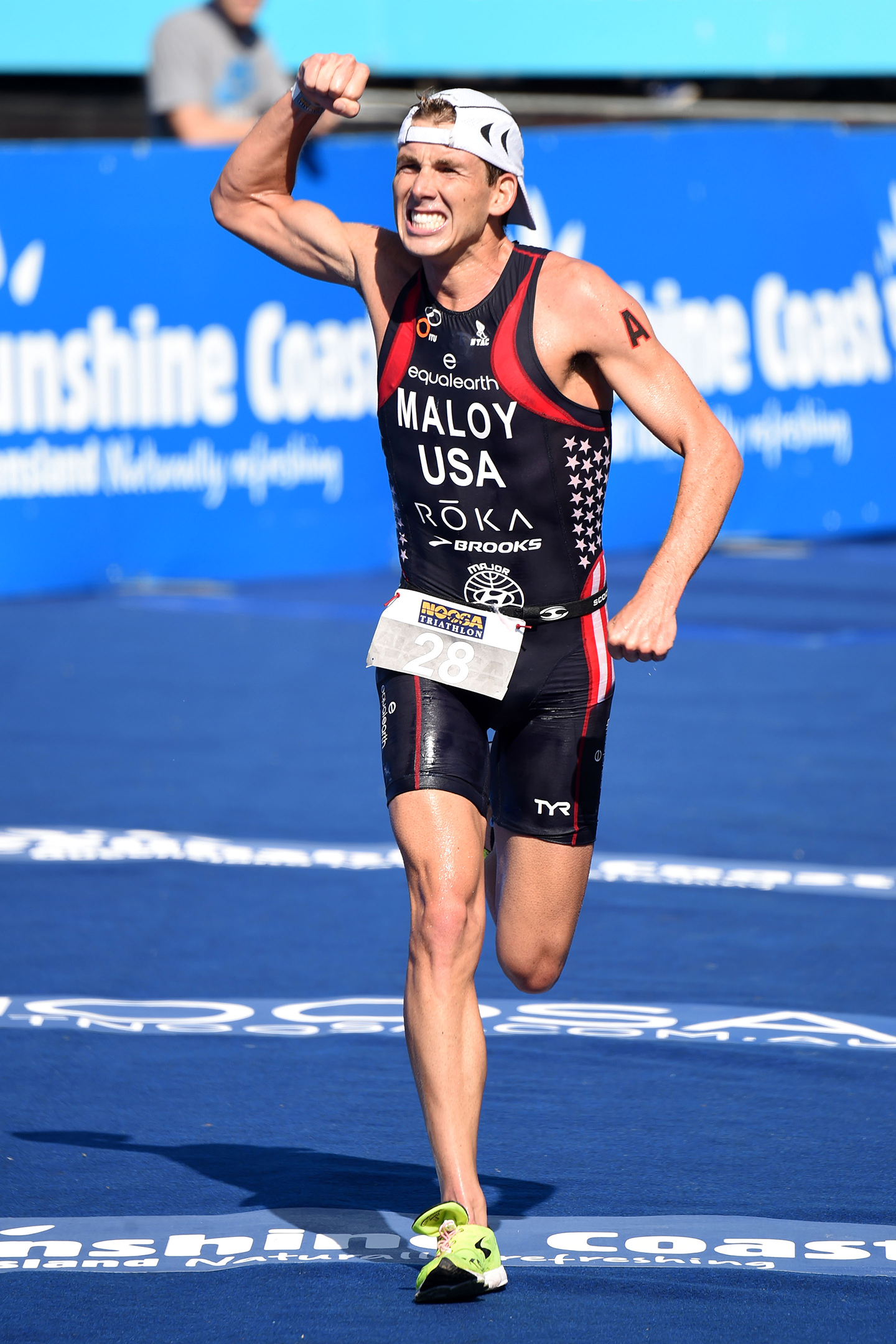 “I don’t know if I was running scared but I knew where they were and I was pushing the whole time and I just wanted to go and, fortunately, it was enough,” Maloy said.

Maloy was surprised with the support he received from the Australian crowd.

“This is an amazing event, I can’t believe as an American I got so many cheers. It’s just been awesome,” he said.

Race favourites Fisher and Birtwhistle were second and third across the line.

It was Van Coevorden who made the move out in front on the bike, until a disappointing early turn out on course led to her disqualification.

Back in charge, the defending champion Gentle used a bike and run combination to run out a convincing winner.

Gentle’s emotion as she crossed the line showed exactly what the win meant to the Olympic hopeful.

“I know Danielle (De Francesco) very well. We actually started triathlon together and she is an amazing swimmer so I knew she could set the pace really fast at the start,” said Gentle.

“I had a lot of confidence in my bike but I haven’t been well over the last week and I knew that the run would be a bit touch and go. I really tried to hold form and composure and I couldn’t be happier to win here today. Fingers crossed for Rio in 2016 and I will definitely be giving it my best shot.”

Gentle joins legend of the sport and mentor Emma Frodeno (nee Snowsill) with her third listing on the Noosa Triathlon Honour Roll.

“This win is so special. I love Noosa triathlon. It’s such an honour to come here and perform. “There has been some amazing athletes that have come here before me and win. To be on that honour roll is close to my heart,” Gentle said.

More than 8,300 athletes competed at the Noosa Triathlon today across both the individual and relay team categories.